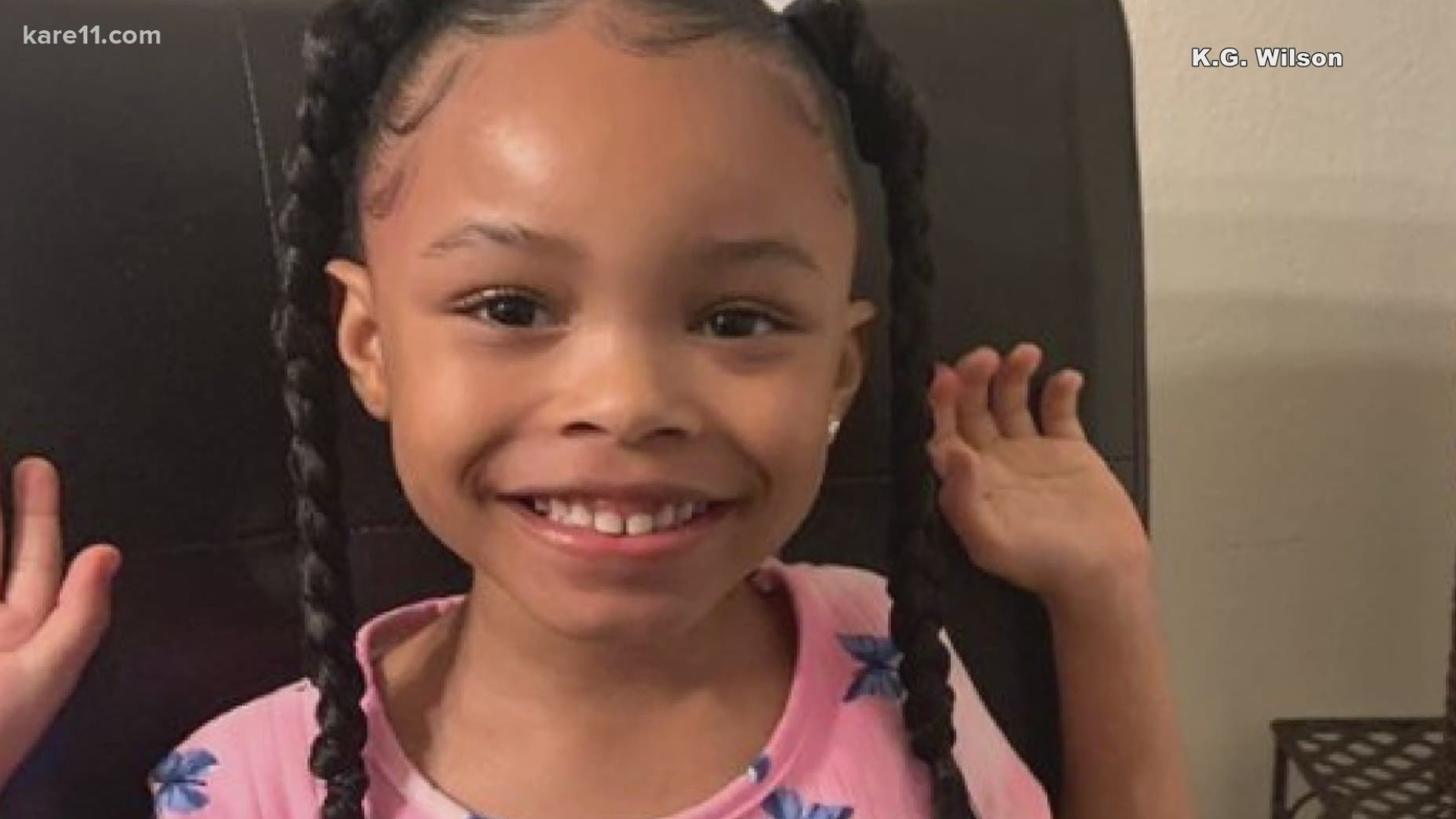 MINNEAPOLIS — A little girl shot in the head during a hail of bullets has died from her injuries, the latest deadly incident to take place in a community angry over the violence and searching for solutions.

Aniya was eating McDonald's in the back seat of her family's car on the 3500 block of Penn Ave. N. in north Minneapolis on Monday evening when shots rang out, and she was struck. Family rushed her to Hennepin Healthcare, where family confirms she died early Wednesday.

Aniya is the granddaughter of prominent peace activist KG Wilson.

"I just went from sad to mad," Wilson wrote on Facebook about his granddaughter's death. "Right now all I want to know is who did this?"

Wilson spoke to reporters outside the hospital after his granddaughter's death.

"Now it became a homicide instead of a shooting," Wilson said. "You murdered our loved one. A six-year-old baby. Our precious little girl. You murdered her. I don’t’ know who you are. Where you are at. But I hope you’re watching this. I don’t know if you have any six-year-old brothers or sisters. I don’t want anybody to feel what we’re feeling right now. How can you live with yourself?"

Wilson asked that those responsible turn themselves in.

"I’m saying to you right now. I’m begging you. Turn yourself in. You killed a baby. If it was an accident, turn yourself in," Wilson said. "Find it in your heart. You can’t be that heartless."

Wilson also described how Aniya's death is a loss for the entire community.

"The most beautiful little girl probably ever here in Minneapolis, could have been one of our future leaders, I definitely was trying to train her up to be one of the future community leaders, leading her by example. I would not want her to see me like this today."

Wilson also spoke with reporters a day earlier about the anger and hurt he feels after working for decades to end the cycle of violence on the north side, only to have his beloved Aniya become a victim.

"My family is hurting. I have done nothing but try to help families for many years," Wilson told KARE 11's Lou Raguse. "And the person who shot my grandchild, if you’re watching this, if something had happened to you, I would have been there for you or your family. So if you can find it in your heart to turn yourself in, you could get forgiveness from me."

Aniya was the 20th child shot in Minneapolis so far in 2021, and the third in just a few weeks. Violent crime is up overall, nearly 10% from this time last year. Her fatal shooting follows three days of gun violence across Minneapolis that ended with six people injured and one man's death. One of the people injured on Saturday was a young girl playing on a trampoline with other children at a birthday party when she was shot by a person in a red four-door Ford.

That child, identified as 8-year-old Trinity Ottoson-Smith, suffered injuries so severe that Minneapolis police officers rushed her to the hospital via squad instead of waiting for an ambulance.

The first child shot in the recent spike in violence was 10-year-old Ladavionne Garrett Jr., who was sleeping in the back seat of his parents' vehicle near 34th and Morgan Ave. N when a bullet struck him in the head April 30. Community groups have held regular prayer vigils outside North Memorial hospital, where both Ladavionne and Trinity Ottoson-Smith are being treated.