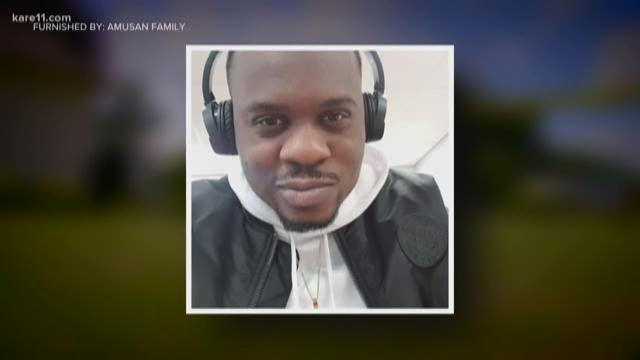 A man shot by police officers Sunday morning in Woodbury has been identified by his father.

Kolawole Amusan tells KARE 11's Lou Raguse that his son, Oluwakorede Amusan, has a history of mental illness and has been suicidal in the past.

Woodbury Police Commander John Altman confirmed the shooting, which took place on Highpointe Road and Windsor Lane just after 11:30 a.m. He said a man had called 911 and told dispatchers that he "wants to die," and to "come kill me."

Altman said responding squads encountered the man in the street, and the suspect took a shooting stance in the direction of officers, who then opened fire with both lethal and non-lethal rounds. Police did not say whether he was armed.

Oluwakorede Amusan is 30 years old and goes by Korede, according to his father. He was taken to Regions Hospital, where he is reported in stable condition. His father said he is expected to survive.

Kolawole Amusan said it is his understanding that his son may have taken a knife from their house, but he said his son does not have a gun.

Neighborhood resident Jamie Kujawa was returning from a 60-mile bike ride with his friend Devaney Diaz when the men rode up to the scene. "Two police officers came up to us basically at gunpoint and told us to get on the ground," he recounted, "And I kept asking what was going on, and I can see an individual down in the front yard."

Kujawa says he saw a man loaded into an ambulance and taken away.

Neighbor A.J. Nobello was out in his yard when he and his wife heard what they thought were fireworks. They walked around the corner and saw officers firing their weapons. "I grabbed all the kids, everyone, and we all ran inside and went to the basement because it's the safest place to be."

Commander Altman says Woodbury Police are working with the Minnesota Bureau of Criminal Apprehension, which is routine in cases of officer-involved shootings. He says the officers involved in the incident were not injured.