A Cup Foods employee who sold George Floyd cigarettes shortly before his death said he offered to pay out of pocket to cover what he believed was a counterfeit bill. 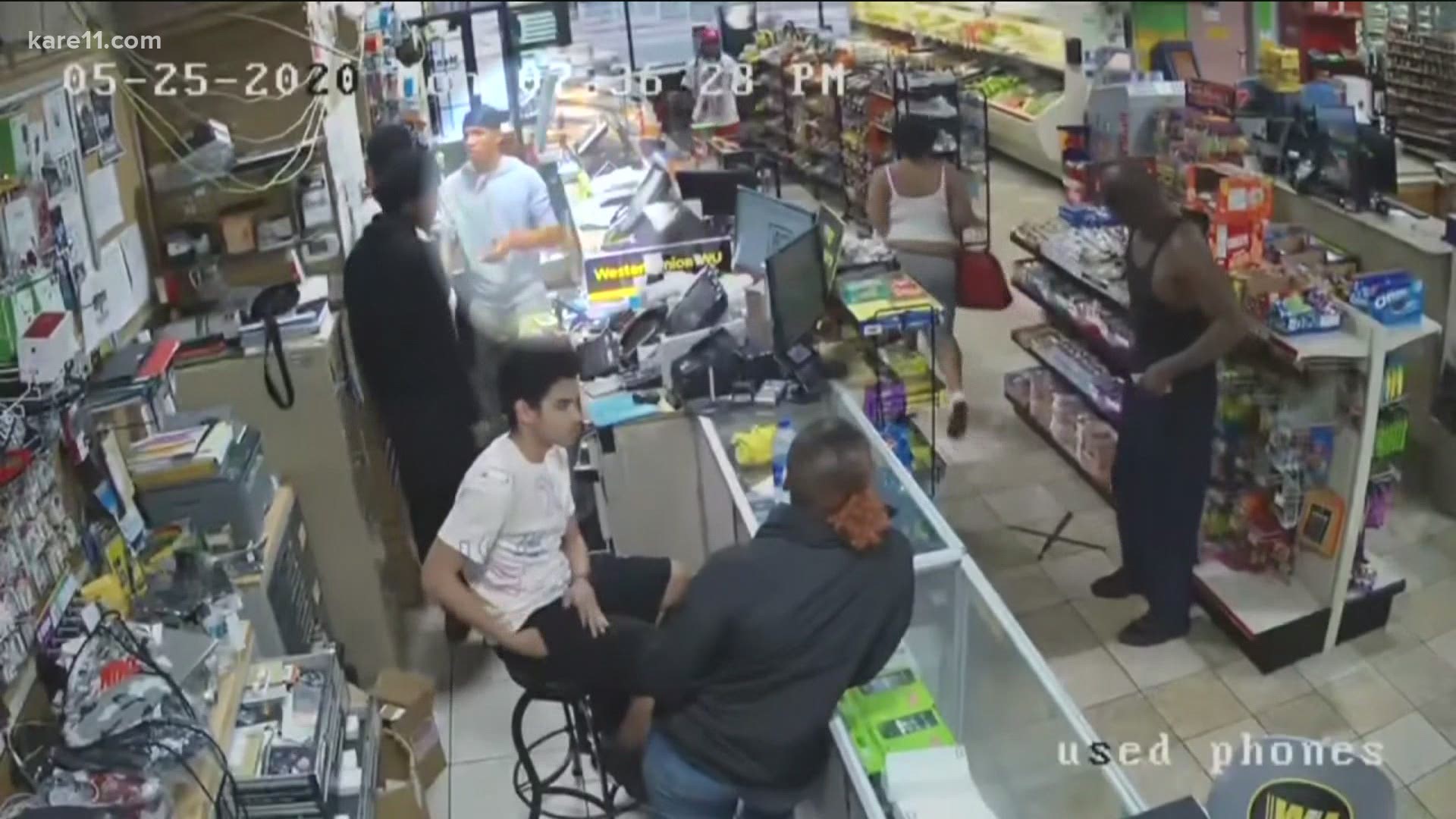 MINNEAPOLIS — Surveillance video of George Floyd walking around a convenience store in the moments before his death was presented to the jury Wednesday, in the trial of former Minneapolis police officer Derek Chauvin.

The video captures Floyd inside Cup Foods, chatting with employees and ultimately purchasing cigarettes with what store employee Christopher Martin believed to be a counterfeit $20 bill.

Martin, a 19-year-old who worked at Cup Foods at the time of Floyd's death, was called to the stand by state prosecutors Wednesday morning. He's the second person who testified Wednesday in Chauvin's murder trial, following a short appearance by the Minneapolis firefighter who was off-duty when she called 911 on officers during Floyd's arrest. 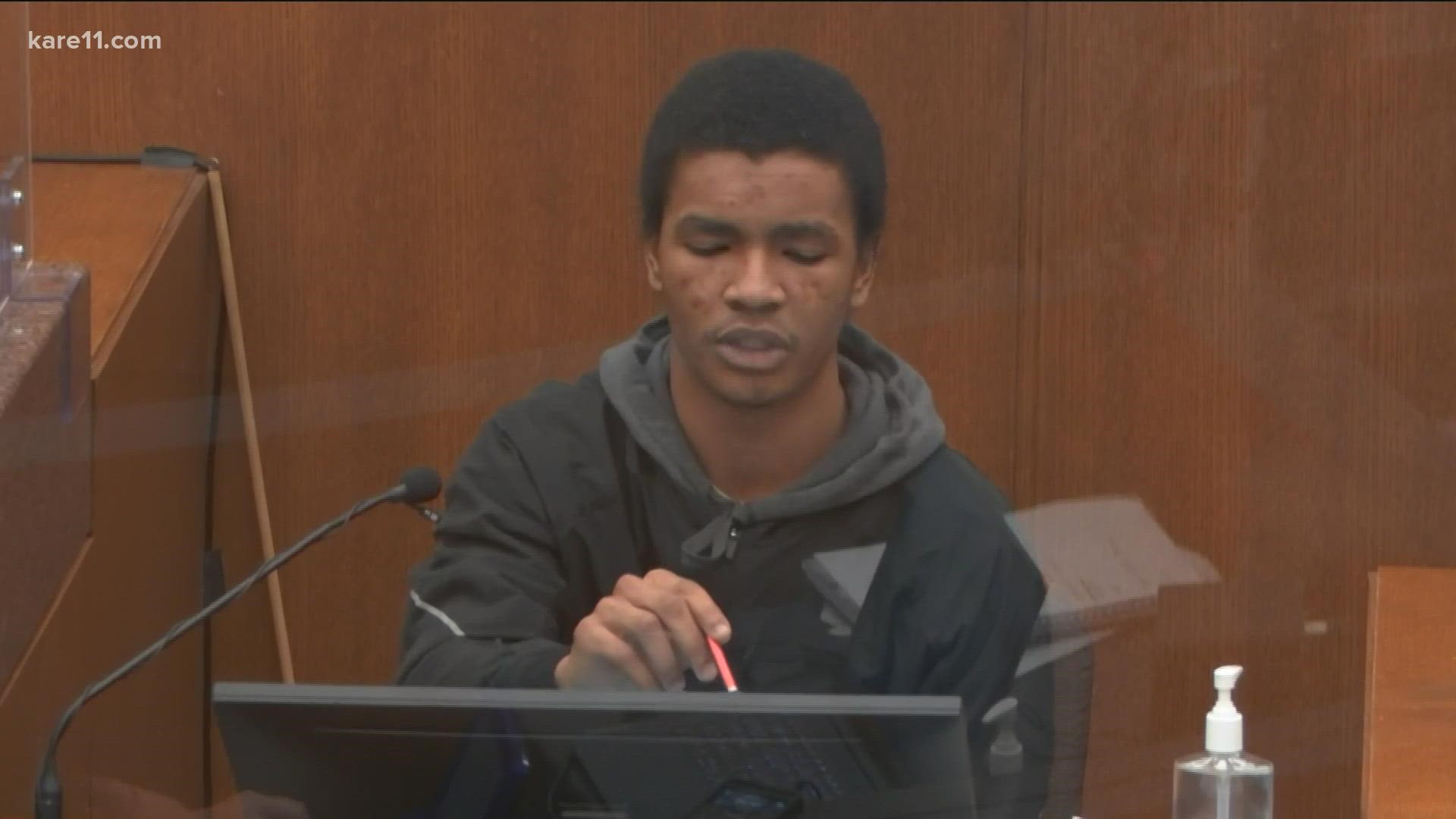 Prosecutor Matthew Frank asked Martin to review the surveillance video from May 25, 2020, the day of Floyd's death. It's the first time the video has been presented to the public.

Martin recalled speaking with Floyd inside the store that day. He asked Floyd about the sports he played.

"It kind of took him a little long to get to what he was trying to say, so it would appear that he was high," Martin said.

"When I saw the bill, I noticed that it had a blue pigment to it, kind of how a $100 bill would have and I found that odd. So, I assumed it was fake," Martin explained.

Martin said he completed the transaction despite his doubts, and Floyd left the store.

Martin told jurors the store had a policy that any employees who accepted counterfeit bills would have to cover the cost out of their own paychecks.

"I took it anyways and I was planning to just put it on my tab until I second guessed myself," Martin said of Floyd's fake bill. "As you can see in the video, I kept examining it and then I eventually told my manager."

Since Floyd had already left the store, Martin said his manager told him to go out to Floyd's vehicle and ask him to come back inside.

Martin and one other person approached Floyd's vehicle and spoke with him, but Floyd didn't want to return to the store.

Martin told the court he offered to cover the cost, but his manager sent him back outside to try again. Martin brought two others with him this time.

Martin said the person in the passenger seat spoke to them most during the interaction. That person said they tried to use a fake bill, but didn't go through with it.

He testified that they tore the bill in half in front of him.

Martin testified Floyd still didn't want to return to the store, and that's around the time when his manager instructed another coworker to call the police. He later went outside and saw Floyd being detained by police on the ground.

Martin said he started filming the incident, and that an officer pushed one of his teen coworkers at the scene. Martin eventually deleted the video he took because he believed Floyd was dead.

"I just didn't want to have to show it to anyone," he said.

"If I had just not taken the bill, this could've been avoided," Martin said.

During cross-examination by the defense, Martin clarified that he didn't believe Floyd knew he was using a fake bill.

He said he believed the person with Floyd was behind the counterfeit money.

Martin testified that he stopped working at Cup Foods after the incident.

After Martin's testimony, Jamar Nelson, a spokesperson for Cup Foods, denied that the store has ever made an employee pay for a counterfeit bill.

Nelson told KARE that Cup Foods only tells employees they have to pay for counterfeit bills if they don't check them as a "deterrent."

It's also not the store's protocol to send employees outside. The reason they decided to do so was "because we had a good enough relationship with him (George Floyd) and we felt like he didn't know it was counterfeit," Nelson said.