Several protests Saturday drew thousands to the streets, calling for everything from defunding Minneapolis police to prison reform. 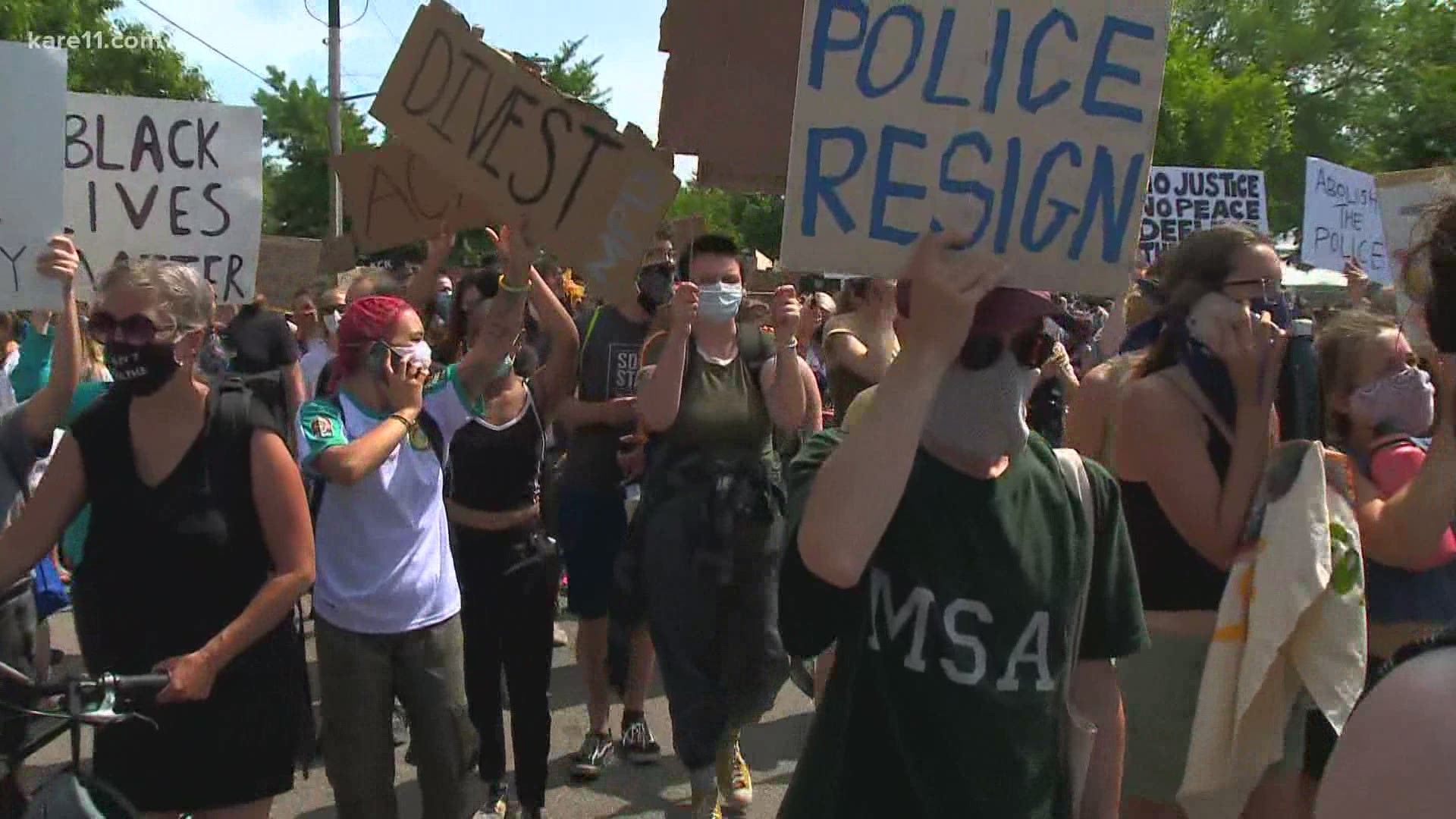 Led by young activists and organizers at the Black Visions Collective, the group is demanding that Mayor Jacob Frey immediately begin the process to stop funding the Minneapolis Police Department (MPD) after the death of George Floyd under the knee of a Minneapolis officer. Instead, they are advocating investment in community groups and resources that will "ensure the well being of residents and allow a transition to community-led safety beyond police."

"It's time for Frey and the entire City Council to show courage and visionary leadership, by moving our money out of a murderous police department that cannot keep residents safe, and invest them into public health approaches to violence prevention, mental health resources, solutions to the opioid epidemic, and affordable housing," read a group statement. "In a pandemic, there is an even greater need for every penny of our city's money to go toward keeping us safe, healthy, and housed."

Eventually the protest stopped outside Mayor Jacob Frey's home and chanted for him to come outside. Frey did, and spoke to the crowd, who asked if he would commit to defunding the police.

“I am absolutely for a massive shift, a structural shift in how the police department functions I’ll say it again. Am I for abolishing the entire police department? No I’m not and I’ll be honest about that too,” he said.

After hearing his response, the crowd booed Frey as he left.

WARNING: The video below includes language some may find offensive.

The demonstration comes just 24 hours after the Minneapolis City Council voted to comply with a temporary restraining order that bans the use of any chokehold or neck restraint, and mandates that officers intervene when they witness an unauthorized use of force.

After a series of speakers, the crowd poured out of Bottineau park and began marching down the streets of northeast Minneapolis.

Just over an hour earlier a coalition of more than 17 grassroots organizations filled Summit Avenue outside the Governor's Mansion early Saturday afternoon in St. Paul, demanding prison and police reform.

KARE 11's Jennifer Austin estimated that the crowd numbered at least 1,000 people as of 1:30 p.m, and was comprised of activists from Black Lives Matter, Communities United Against Police Brutality, Women's March Minnesota and Interfaith Coalition on Immigration, among other organizations.

Protest organizers say the mission to connect calls for justice for George Floyd, and reiterate a list of demands to the governor that includes:

After listening to a number of speakers the crowd began marching the streets around the mansion, chanting "Black Lives Matter!" and "No justice, no peace." They blocked traffic, at one point sitting down where Summit and Lexington Avenue intersect.

In their release to news organizations, the coalition spoke of the importance of dismantling Minnesota's prison system as part of the structure of white supremacy that led to the death of George Floyd, who died nearly two weeks ago while a Minneapolis Police Officer kneeled on his neck.

Protesters are also demanding that Walz use his power during the COVID-19 pandemic to ensure social distancing in prisons by reducing inmates to 60% of designed capacity.

The demonstration outside Mr. Walz's residence is just one of several scheduled for Saturday.

RELATED: 8:46: A number becomes a potent symbol of police brutality

RELATED: Thousands 'sit-in to breathe' at the State Capitol