'Excessive' and 'deadly': What an LAPD sergeant testified about Derek Chauvin's use of force

"My opinion was that the force was excessive," Los Angeles police Sgt. Jody Stiger testified about Chauvin's restraint of George Floyd. 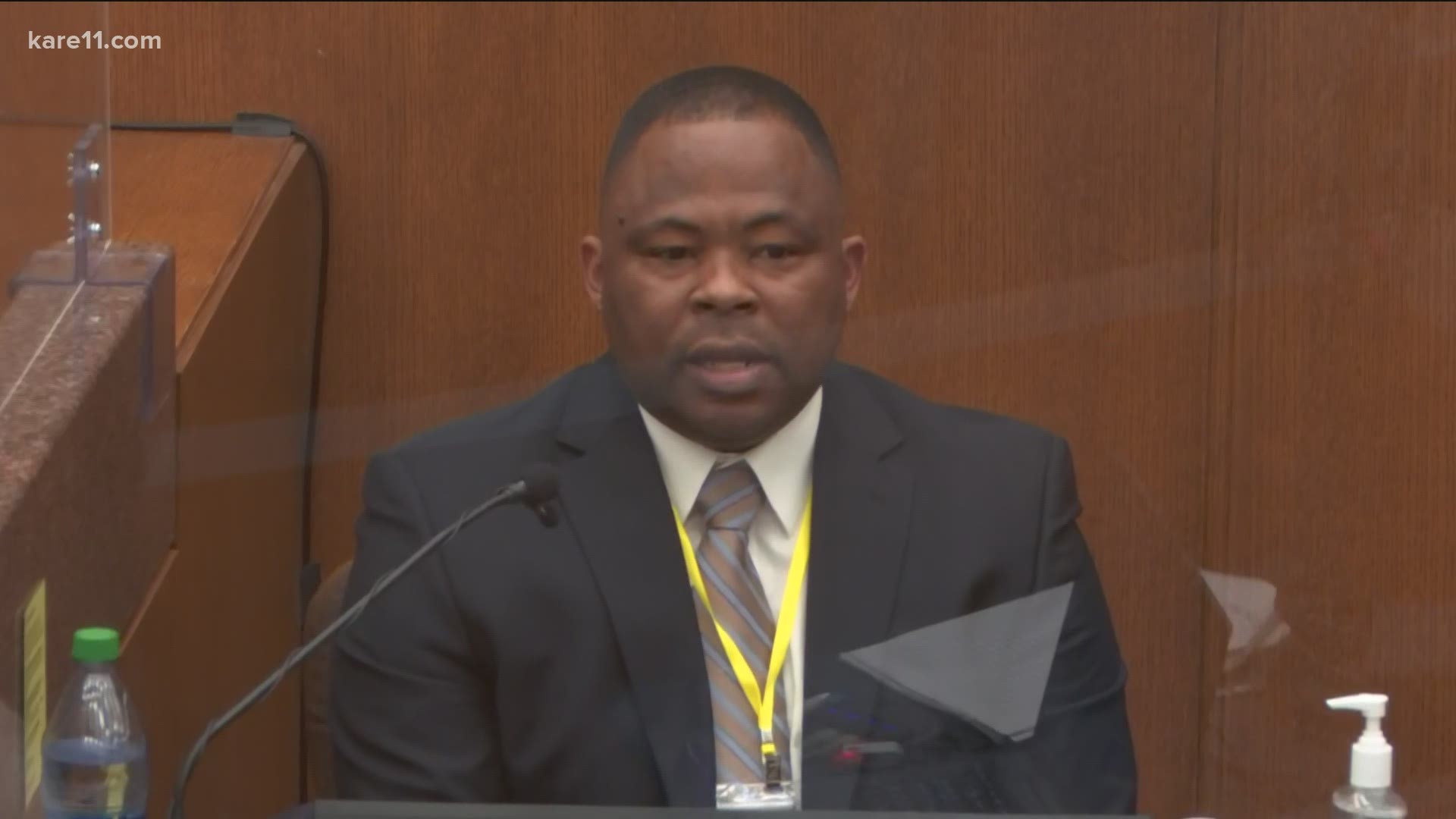 MINNEAPOLIS — The first expert witness from outside the city of Minneapolis called to the stand in Derek Chauvin's murder trial told the court this week that he believes the former officer's use of force "was excessive."

Los Angeles police Sgt. Jody Stiger was brought in by the state Tuesday to evaluate Chauvin's arrest of George Floyd on May 25, 2020. He resumed his testimony Wednesday, stating that his review of body camera footage and photos determined that Chauvin's knee was on Floyd for 9 minutes and 29 seconds, and that the restraint constitutes "deadly force."

Stiger added that positional asphyxia alone could cause death, and in this case it was compounded by the weight of three officers: Chauvin, Thomas Lane and J. Alexander Kueng.

"When you add body weight to that, then it just increases the risk of death," he said.

Stiger said police officers have known of the dangers of positional asphyxia for "at least 20 years."

Stiger also said that earlier in the arrest, it appeared that Chauvin was attempting to use "pain compliance" on Floyd's hand. He pointed to a photo that showed Chauvin's hand holding Floyd's behind his back, saying it appears Chauvin is "squeezing" his fingers.

He said squeezing the fingers can cause pain, as can pulling the wrist into the handcuff. Stiger said this could cause pain especially because the handcuffs are double locked.

"They could continue to ratchet tighter as the person moved," Stiger said.

He said he could hear the cuffs ratcheting in the body camera footage.

"What if there's no opportunity for compliance?" Prosecutor Steve Schleicher asked.

"Then at that point, it's just pain," Stiger said.

He added that Chauvin did not stop the pain compliance techniques during the restraint.

Stiger analyzed Chauvin's actions based on the criteria outlined in Graham vs. Connor, a U.S. Supreme Court case which has three prongs to determine the reasonableness of an officer's use of force. The first is the severity of the crime, which was a suspected counterfeit $20 bill. Stiger indicated that he viewed that as a low-level offense that would not normally require force.

Stiger also said he didn't perceive the crowd that had gathered during Floyd's arrest to be a threat or hostile.

"Because they were merely filming and they were, most of it was their concern for Mr. Floyd," he said.

After reviewing the Minneapolis Police Department's use-of-force continuum, Stiger said, "My opinion was that no force should have been used once he was in that position."

Upon cross-examination, defense attorney Eric Nelson asked Stiger if different police departments may rule differently on what use of force is appropriate.

Stiger responded that all departments he knows of judge use of force based on Graham vs. Connor, but he did agree with Nelson that "reasonable minds can differ."

Nelson also confirmed that the reasonableness was an officer's use of force is based not just on the three prongs, but on the "totality of the circumstances."

"When I do my analysis, I look at the totality of the circumstances, meaning I look at the officers' tactics, as well as the subject's actions during the whole entire incident," Stiger said.

Nelson asked if a handcuffed person could still present a threat, even after they are in the prone position.

"Based on that person's actions, yes," Stiger said.

Nelson asked Stiger if his conclusion that the force was excessive and deadly was based on the supposition that Chauvin's knee was on Floyd's neck and pressing down on his carotid artery.

"Not necessarily on the carotid artery, but it was in the neck area and on the back," Stiger said.

The defense attorney said that weight might shift from time to time, and asked Stiger whether a photo of the restraint showed Chauvin’s knee on Floyd’s shoulder blades, rather than his neck.

"It appears to be more above the shoulder blades," Stiger said. He commented that several of the photos and videos appeared to show the knee at the base of the neck.

Upon redirect, prosecutor Steve Schleicher asked Stiger to confirm that any pressure would increase the risk when someone is in a prone position, not just pressure on the neck.