John Thompson issued an apology after video surfaced of his conduct at a protest outside MPD union head Bob Kroll's home. 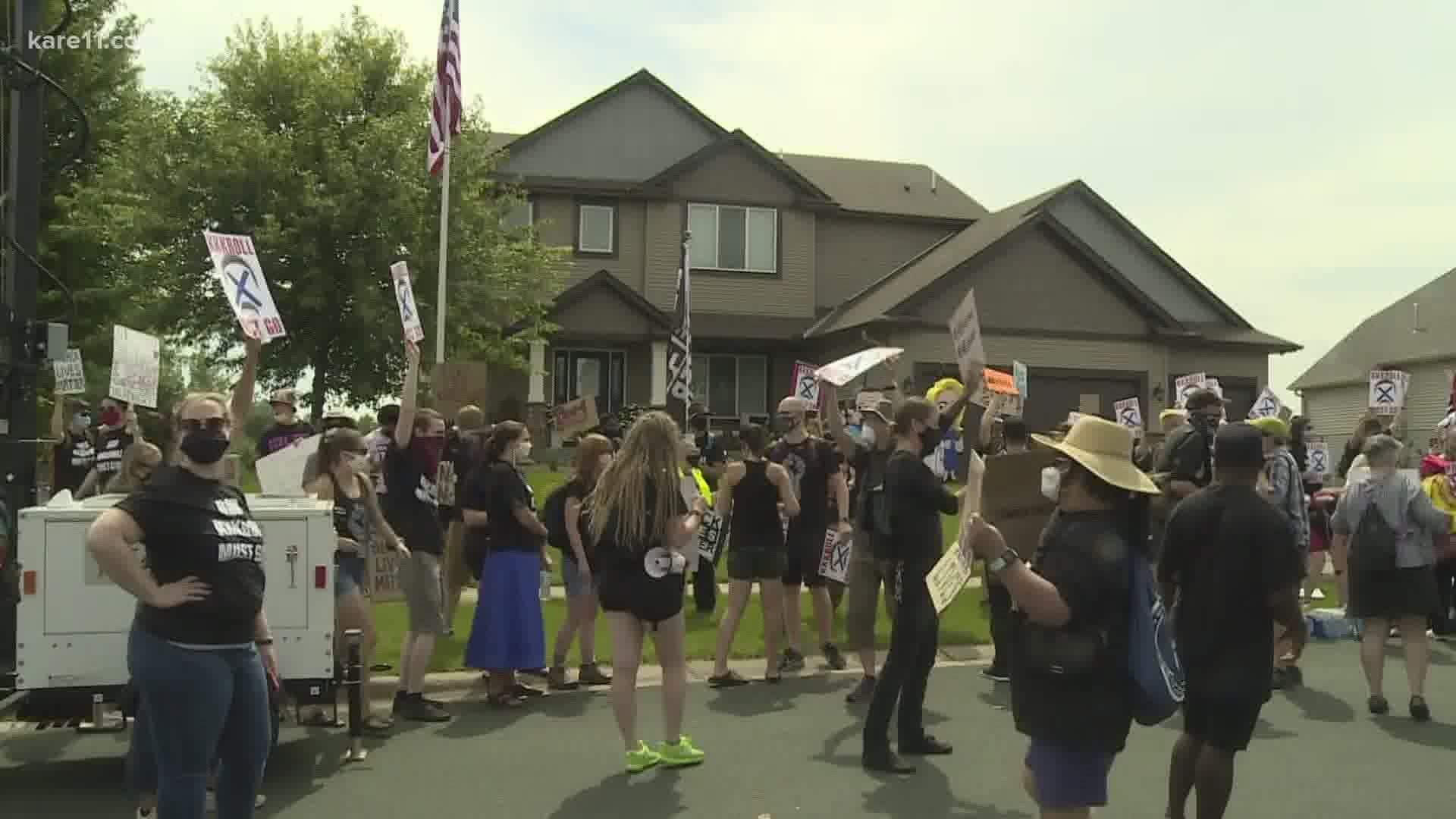 MINNEAPOLIS – A DFL-endorsed candidate for the Minnesota House of Representatives issued an apology this week, after video surfaced of his conduct at a protest outside police union president Bob Kroll’s house on Saturday in the suburb of Hugo.

John Thompson, an activist and friend of Philando Castile’s who won a primary in District 67A earlier this month, spoke for roughly seven minutes as a crowd of about 200 gathered near Kroll’s private residence. They once again called for his resignation as union head, following the killing of George Floyd on Memorial Day. Multiple media outlets captured parts of the speech, including “Unicorn Riot,” which posted the video to a public YouTube page.

Responding to a neighbor who appeared to express support for “blue lives,” Thompson said: “Come on over here with your Blue Lives Matter sign! Blue lives ain’t s-t! And if people in Hugo don’t support black people, f—k Hugo, Minnesota!” Addressing the Minneapolis Police killing of George Floyd, which occurred after officers investigated a report of a $20 counterfeit bill, Thompson then said: “this whole god d-n state burned down for 20 god d-n dollars, you think we give a f-k about burning Hugo down? Now you running your coward a-- back into the garage.” The video later showed Thompson striking effigies of Kroll and his wife, WCCO television anchor Liz Collin.

Thompson declined multiple interview requests from KARE 11, but he issued an apology on his official campaign Facebook page. “I want to make a positive difference, and my comments on Saturday were not helpful,” Thompson said. “Inflammatory rhetoric is not how I want to address the important issues we’re facing, and I apologize. I’m not apologizing for my passion to fight injustice.”

Rosemary Nevils, a community leader who was at the protest, said Thompson’s comments reflected anger – although she agreed that the political newcomer should not have used that language.

“Mr. Thompson is very new to this whole piece here. And he’s reiterating what most of us have already said, and lived through. It’s really, really important that people understand, there are many voices, his is not the only one,” Nevils said. “It was inappropriate. There are ways of saying things – it’s not what you say, it’s how you say it.”

Civil rights attorney and community leader Nekima Levy Armstrong said the outrage over Thompson’s comments distract from the issue of police brutality, adding that the move to protest in front of Kroll’s home was symbolic and intentional.

In a phone interview, Kroll said demonstrators have a right to protest at Minneapolis Police Federation headquarters, as they have several times this summer, but he said they should not have come to his neighborhood.

The Washington County Sheriff and Washington County Attorney’s Office reviewed Thompson’s words and actions from the Saturday protest and determined that they did not have evidence for felony charges. Although Thompson said he did not seem to care if Hugo burned, he did not explicitly make a threat or call for arson, County Attorney Pete Orput noted.

“It was an opinion, that I think is incredibly inappropriate,” Orput said. “But he has his opinion.”

Orput went back to Kroll’s neighborhood on Wednesday, alongside the sheriff and the mayor, to meet with neighbors and explain why they responded as they did.

John Pontrelli, who grew up in the East St. Paul area where Thompson is seeking office, said the candidate’s comments “blew my mind” and made it less likely his neighborhood would grasp the protesters’ message.

“If they had support here, they lost it really fast. Just because of the way they handled themselves,” Pontrelli said. “It was really disgusting to watch.”

The Minnesota Society of Professional Journalists has also condemned the striking of the effigies, calling it a “direct threat” because of Collin’s role as a broadcast journalist.

MNSPJ supports the public’s constitutional right to protest peacefully, but views the destruction of Collin’s image on her private property to be a direct threat against her as a journalist. Full statement: https://t.co/mt6A5E9nfZ

Nekima Levy Armstrong said that that the effigies were not planned, and appeared to have been brought by someone else. But she said the destruction of the effigies was not intended as a threat.

“It's disingenuous to focus on paper being smashed, when we're talking about real lives being killed,” Levy Armstrong said.

In response to Thompson’s comments, Gov. Tim Walz and the DFL both released statements but did not rescind their endorsements. Walz said that “we cannot accept the threatening behavior and rhetoric we’ve seen recently in our political discourse,” while DFL Party Chairman Ken Martin said they do “not condone any rhetoric which is violent, hateful, or inflammatory.”

We cannot accept the threatening behavior and rhetoric we’ve seen recently in our political discourse. When I talk about building One Minnesota, it doesn't mean we all agree or that we won't fight for what we believe in. It means we treat each other with decency and respect.