Here are the latest updates in the aftermath of George Floyd's death in Minneapolis. 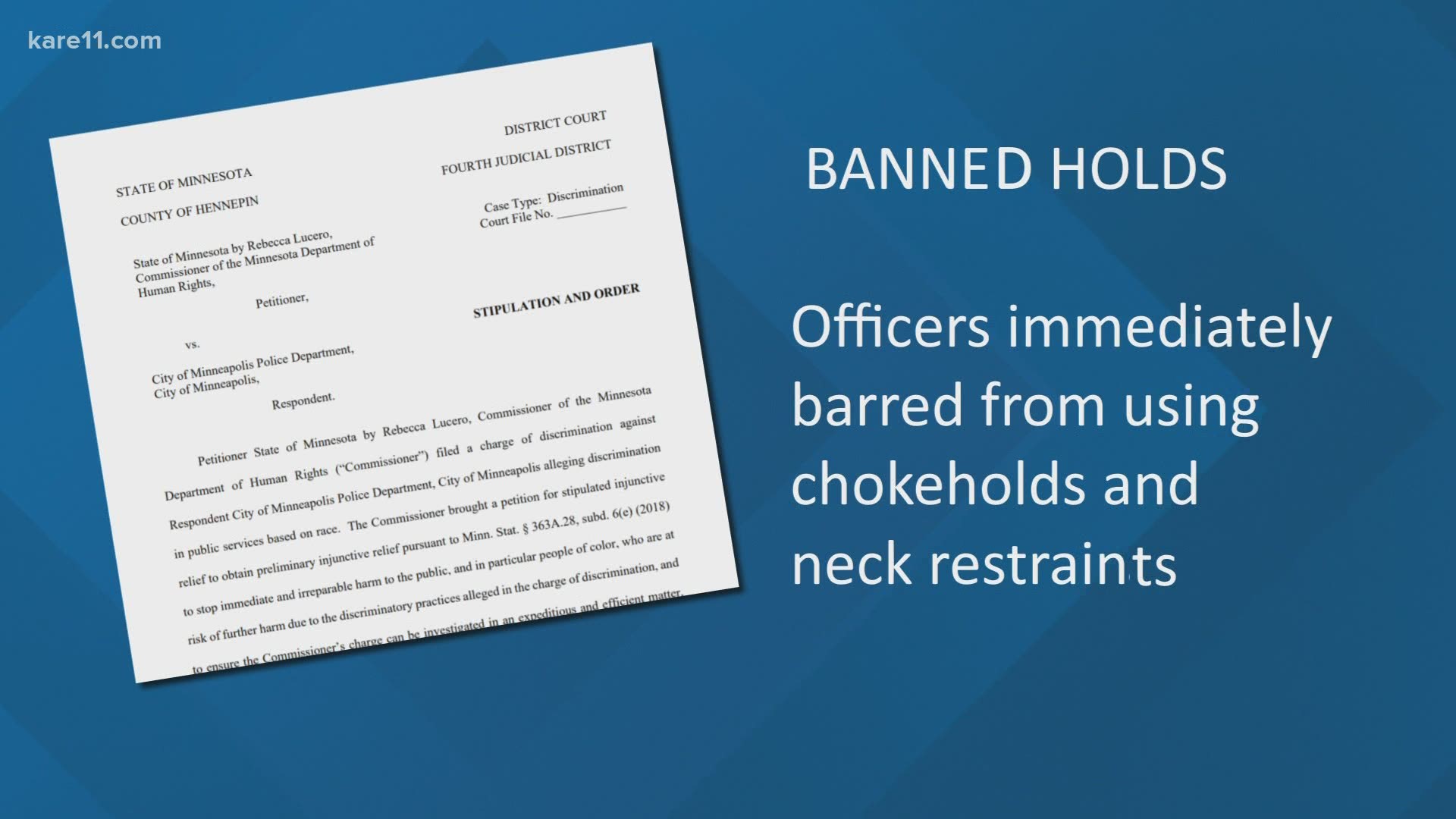 Police officers are banned from using all chokeholds and neck restraints, according to an agreement endorsed by the Minneapolis City Council during an emergency session Friday.

The agreement is the product of a civil rights investigation launched by the Minnesota Department of Human rights in the wake of the death of George Floyd. Floyd died after a Minneapolis officer kept his knee on Floyd's neck for nearly nine minutes while restraining him. The complaint alleges that the City of Minneapolis Police Department has engaged in a pattern and practice of race-based policing for at least the past 10 years, in violation of the Minnesota Human Rights Act (MHRA).

Mayor Jacob Frey signed the Temporary Restraining Order (TRO) shortly after the measure was passed by council members. In the coming days, the mayor says he will work with the City Council to identify further policy reforms and specific changes to state law to improve police accountability and address systemic racism. That work will accompany a renewed push for changes in the police union contract as the city negotiates a new agreement.

“This is a moment in time where we can totally change the way our police department operates,” Minneapolis Mayor Jacob Frey said Friday during the emergency session. “We can quite literally lead the way in our nation.”

Frey said some of the immediate actions, like duty to intervene and duty to report, already exist in MPD policy. He said he will work to implement all changes ordered in the injunction, and expressed confidence in Minneapolis Police Chief Medaria Arradondo.

“Shifting the full culture of policing and addressing the systemic racism is going to require all of us working hand in hand,” Frey added.

Among other things, the injunction will require the City Attorney to prepare a report listing state laws that impede transparency of police data, and prevent the mayor or police chief from disciplining or terminating officers who violate department policies and standards.

"I look forward to working with my colleagues, the department and the community to implement these long overdue changes addressing the systemic issues that have made public safety and policing deadly and detrimental for so many people in our community," said City Council Vice President Andrea Jenkins.

Minneapolis Council member Alondra Cano, who represents the 9th ward, said she does not support rebuilding the Minneapolis Police Department’s 3rd Precinct headquarters, which was burned during unrest over George Floyd’s death.

“I have seen so many people who I believe did have good faith in being able to change the system stepping up and saying this system does not work, this system cannot be reformed and we must do something different,” Cano said.

Cano said she believes renaming Chicago Avenue after George Floyd would be a step forward for the community. A Change.org petition calling for the name change has gathered more than 12,000 signatures.

"We are going to dismantle the Minneapolis Police Department and replace it with a transformative new model of public safety," council president Lisa Bender tweeted.

We are going to dismantle the Minneapolis Police Department. And when we’re done, we’re not simply gonna glue it back together," council member Jeremiah Ellison tweeted. "We are going to dramatically rethink how we approach public safety and emergency response. It’s really past due."

"I appreciate the work by the Minnesota Department of Human Rights and Commissioner Lucero’s leadership.  I will continue to work on efforts to improve public trust, public safety and transformational culture change of the MPD," he said. "I will be bringing forth substantive policy changes."

Gov. Tim Walz reacted to the council's action during an afternoon news conference.

"I just have to be honest, that’s a pretty damn low bar. Just to start with, in terms of, we hadn’t had that," Walz said. "It was not forbidden to do a chokehold yesterday. Now today they put it in and it is. So those who think now is not the right time, and those who think we need to think about this a little longer have certainly not been paying attention. And if you needed the wake-up call, it happened last Monday and continues to right now."

Another night of curfew takes effect in Minneapolis and St. Paul at 10 p.m. on Thursday, June 4, until 4 a.m. on Friday morning. Residents are asked to voluntarily comply.

"The best way to stay out of harm's way is to stay home," the Department of Public Safety tweeted. "Thank you to those Minnesotans that are helping keep their communities safe."

Black Minnesotans stepped up to a microphone at Commons Park in downtown Minneapolis on Thursday night in a vigil to share their personal experiences.

The "We Are All George" gathering was billed as a way to "come together to share in a safe space for healing, community, prayer and change."

The action was taken in a special MCAA Board meeting, in response to " the deepening mistrust in our criminal justice system following the death of George Floyd," according to a news release.

The organization is also asking the Minnesota legislature to support funding for the Attorney General's Office to hire "the best and brightest trial lawyers to handle these critical cases."

MCAA said it would support legislation allowing the Attorney General "to request the assistance of local prosecutors to aid in these cases if needed."

On Sunday, Gov. Tim Walz asked Attorney General Keith Ellison to take over prosecutions in the George Floyd case. On Wednesday, Ellison announced he was upgrading the charges against former Minneapolis police officer Derek Chauvin to second-degree murder, and also charging the three other fired Minneapolis officers in the case with aiding and abetting.

Among those in attendance are Gov. Tim Walz and Lt. Gov. Peggy Flanagan, the mayors of Minneapolis and St. Paul, and members of the Congressional Black Caucus.

Rep. Omar shared some of the public's comments in a Twitter thread during the session.

"You have an opportunity to be on the right side of history," an activist told the leaders in attendance.

“I need to put my spirit and energy towards the work you all have been fighting for for so long," said rapper Common, who was among those invited by Rep. Omar to participate as a leader in the session.

Members of George Floyd's family and attorney Ben Crump visited the scene of Floyd's death near the intersection of 38th and Chicago in Minneapolis on Thursday evening.

The Floyd family thanked mourners gathered at the intersection, and called on them to continue fighting for justice, peace, and change.

The visits followed an emotional memorial service for Floyd at North Central University on Thursday afternoon, aired on television across the country.

The service concluded with eight minutes and 46 seconds of silence, marking the time that Floyd spent under the knee of a Minneapolis police officer.

The second public viewing memorial is 11 a.m. on Saturday, June 6 in North Carolina. There will be two more services June 8 and 9 in Houston, Texas.

A judge has set bail at $1 million without conditions, or $750,000 with conditions, for Tou Thao, J Alexander Kueng and Thomas Lane. All three are charged with aiding and abetting murder and manslaughter, accused of failing to leave their positions on the scene or act as Floyd struggled to breathe.

Former officer Derek Chauvin is now charged with second-degree unintentional murder after Attorney General Keith Ellison announced Wednesday that the case against Chauvin had been upgraded.