"Our tagline is "H O P E - the new 4 letter word" and we believe that the spirit of Minneapolis can change the world," Valerie Quintana said. 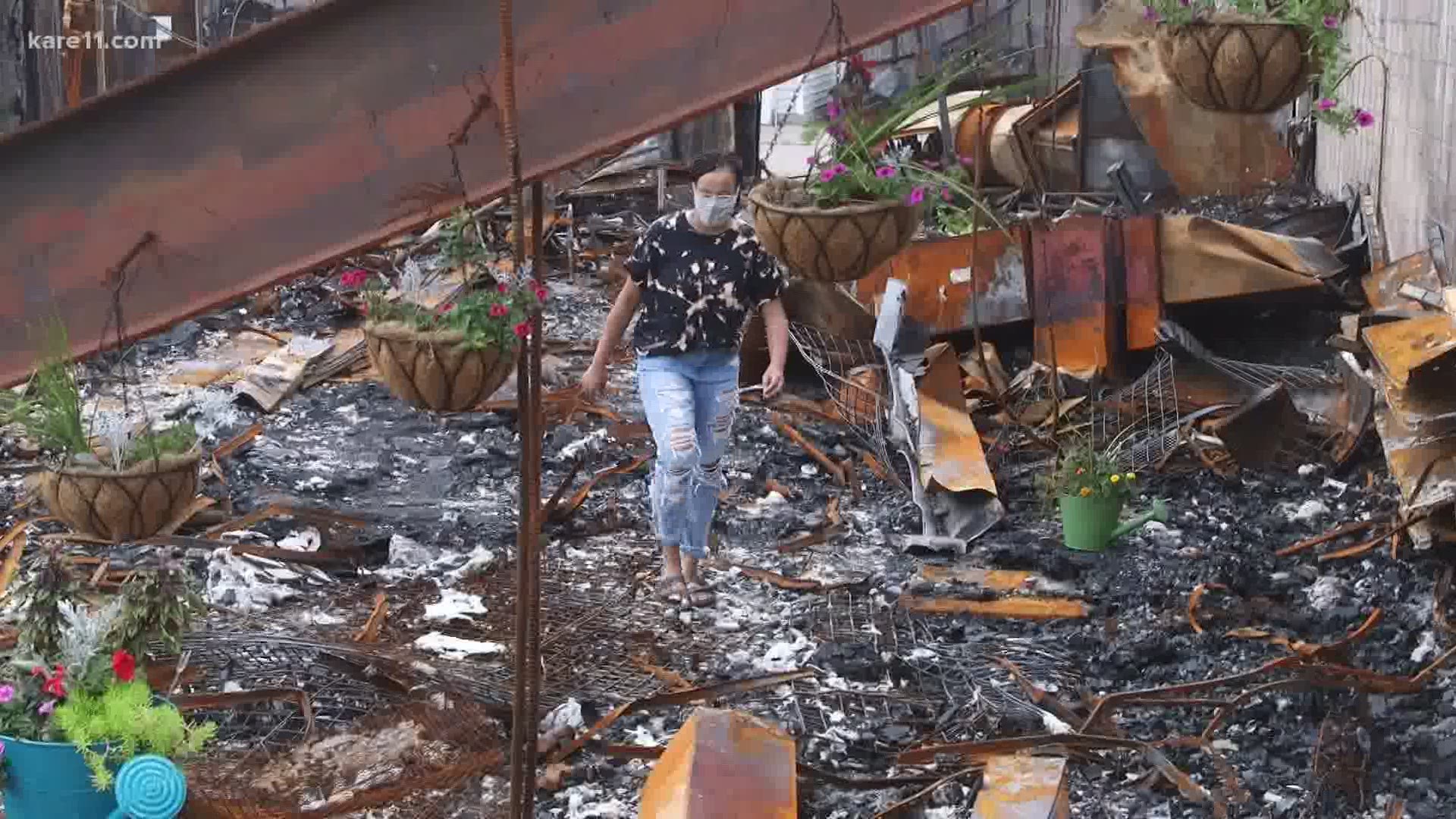 MINNEAPOLIS, Minnesota — On Lake Street in Minneapolis, bright spots can be found in burned out buildings—colorful flowers that sit amid the rubble.

The flowers are part of the "Hope Beyond the Rubble" project, which plants flower installations in buildings that were set on fire after George Floyd was killed.

It's one of many projects being spearheaded by a newly established nonprofit, with a fiscal sponsor, called "The Real Minneapolis."

"Have people see that there is hope and there can be something new and good, even amidst all of this rubble," Mary Claire Francois, 18, said.

Francois grew up in the neighborhood where Floyd was killed.

After his death, Francois recalled, "A few nights had passed and I was crying to my mom, 'How can I help? What can I do? What do they need?'"

Originally, Francois started a GoFundMe with a goal of raising $1,000 to help get basic needs for the memorial site at 38th and Chicago (also now known as George Floyd Avenue).

Then, it blew up. Since launching, it has raised more than $21,000. As of late June, more than $13,000 of the donations have gone to shelter needs, security, first aid, sanitation and hygiene, miscellaneous supplies, small business support and food providers.

After launching the GoFundMe, "The Real Minneapolis" was born.

"It started a lot with some photojournalism and just kind of going out and showing what a lot of the media sources weren't showing like the peaceful protesting," Francois said. "We kept saying, 'Well this is the real Minneapolis.' This is what's not being shown. That's how we got our name for our nonprofit, The Real Minneapolis."

Credit: Ben Garvin
The "Hope Beyond the Rubble" project plants flower installations in buildings that were set on fire after George Floyd was killed.

Valerie Quintana, Francois' neighbor, is also behind the nonprofit.

"When we woke up and saw that video of George Floyd crying out for his mama, his deceased mama, we were summoned," Quintana said.

Francois and Quintana were on the ground, finding out what the community wanted.

"100% of the funds go directly to the community and what we we're finding is that people really wanted to help and they didn't know how," Quintana said.

Youth have been helping them with their "Hope Beyond the Rubble" project. Last week, they celebrated the opening of their South Minneapolis Youth Garden at the corner of Lake and Chicago.

Through community grants and donations, The Real Minneapolis was able to provide paid summer jobs for south Minneapolis BIPOC teens.

"R.T. Rybak actually called me personally and wanted to make a personal donation to help some of the boys and girls from the Phelps Park Boys & Girls Club. So with that money, we created paid jobs. It's $14.50 an hour, up to 60 hours this summer," Francois said.

Those teens are tending to the garden and mentoring younger kids. So why a garden?

"Because the importance of growth and kind of building something from the ground up again. Starting fresh, new flowers, veggies. It really teaches the youth the importance of being mindful of what you're putting into your body, as well," Francois said.

Credit: Ben Garvin
Last week, The Real Minneapolis celebrated the opening of the South Minneapolis Youth Garden at the corner of Lake and Chicago.

They have other programs planned, but they need more funding to hire youth and create more programs. They're also developing a mentorship program and looking for corporate sponsors to get involved with the organization.

If you'd like to help, you can donate here. They also have a Facebook fundraiser for the youth summer garden.

Quintana added, "We created The Real Minneapolis to be an umbrella and so that any project could fall under that umbrella that was community-related and demonstrated hope. "Our tagline is "H O P E - the new 4 letter word" and we believe that the spirit of Minneapolis can change the world."