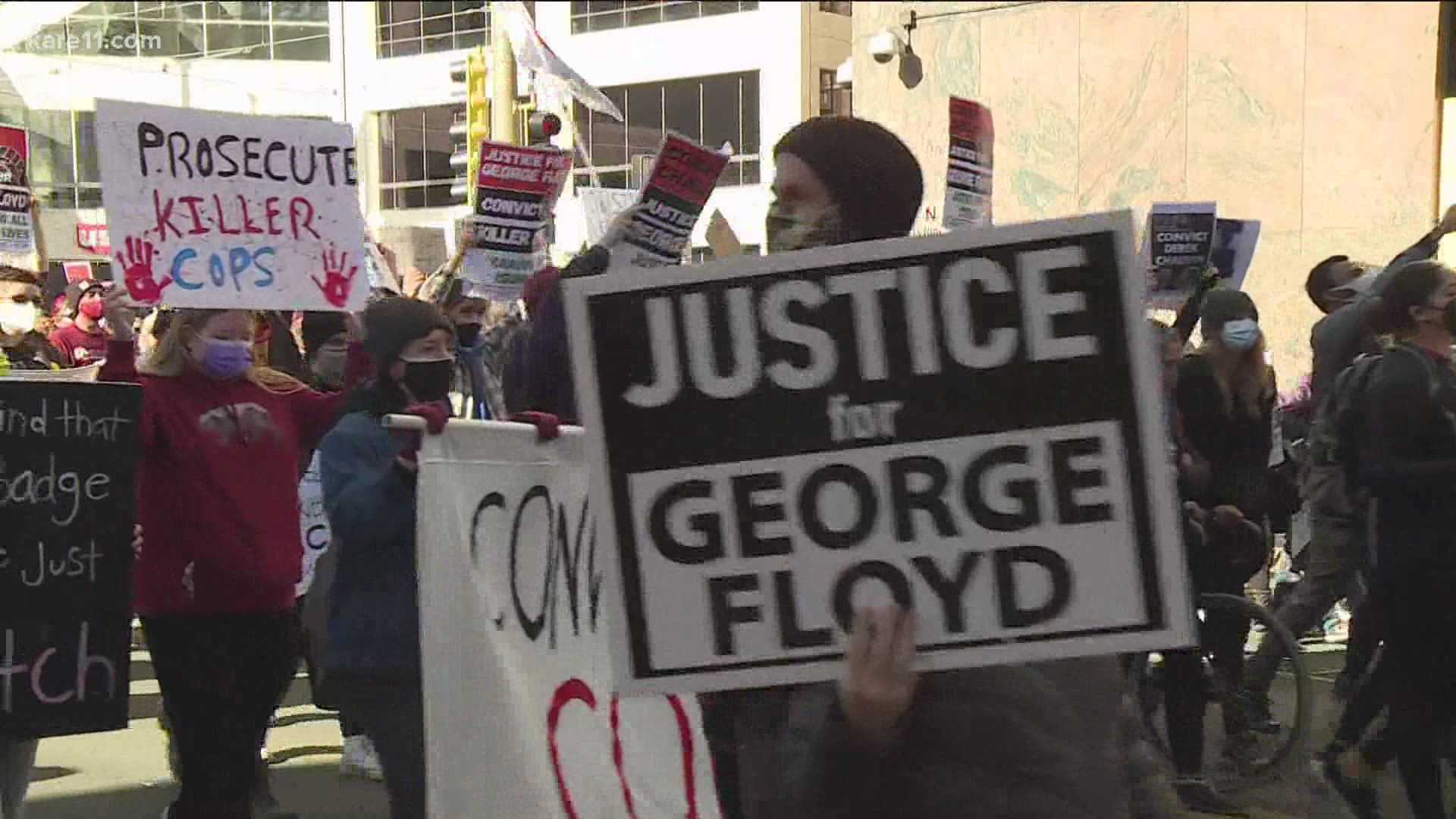 Outside, demonstrators called for justice for George Floyd.

According to Twin Cities Coalition 4 Justice 4 Jamar, the march was organized by more than 20 different groups and will continue to demonstrate during key parts of the trial like opening arguments, closing arguments, and the day a verdict is announced.

"We will not rest until we see all four of George Floyd’s killers taken off the streets, and our communities have the power to decide who polices our communities and how our communities are policed," organizers wrote in the description of a Facebook event for the march.

During the rally, NAACP Vice President Anika Bowie said, "You may be fighting against a system but we have a built a movement."

Demonstrators carried signs and banners with statements including "Justice for George Floyd" and "Black Lives Matter." At the front of the march, a group carried a banner reading "Justice 4 George & all stolen lives; the world is watching."

"It's history, man... Your emotions are up but it's a day to see if we can get justice," said Will Wallace with the group Twin Cities Nonviolent.

In the release, organizers wrote that they don't "realistically" expect justice from the system -- but that they will keep fighting for it.

Jury selection for the trial of Derek Chauvin was set to begin Monday, but by late morning it had officially been delayed until at least Tuesday. Most of the debate centers around a potential third-degree murder charge that could be added to the case, an issue that is now making its way through the higher courts.

"I can say that I'm hopeful. I have faith. And I have power in the people that together we can make changes," said Catina Neal who works for Minneapolis Public Schools and is a part of the Minneapolis Federation of Teachers.

After court proceedings end for the day, George Floyd's sister Bridgett Floyd is set to speak to media about the trial. She is the founder of the George Floyd Memorial Foundation and the Floyd family representative present in court Monday.

According to a release from the foundation, Bridgett Floyd will announce several initiatives in Minneapolis for the next several weeks. The foundation provides scholarships and promotes community service -- something Floyd said her brother would have wanted.

At an afternoon press conference for "Operation Safety Net," law enforcement leaders thanked the demonstrators for exercising their first amendment rights, and doing so in a peaceful manner.

"As we said from the very beginning, we can have large gatherings, and we can do so with them being peaceful. For all of you who participated in your first amendment constitutional rights, we want to thank you for doing that peacefully," said Minneapolis Police Chief Medaria Arrandondo.

"We do need peace for justice, and we need justice for peace," added Hennepin County Sheriff Dave Hutchinson.

State Patrol Col. Matt Langer noted that the large demonstration required no law enforcement response at all, a best-case scenario that operation organizers hope continues for the duration of the trial. "It was a wonderful statement of how this can be done the right way, and in a way that Minnesota sees time and time again."

Currently outside The Armory. @kare11 pic.twitter.com/TLS3KtKfdj

Monday's march follows several weekend events. On Saturday, families of people killed by police gathered outside the Minnesota governor's mansion, and a group of demonstrators marched from 38th and Chicago to the Hennepin County Government Center.

On Sunday, demonstrators held a silent march outside the Government Center. Marchers carried signs, flowers, and a replica coffin.

While trial proceedings began Monday, the judge has said the trial itself won't begin until at least March 29.

Cortez Rice just spoke. Considers himself a nephew of George Floyd’s, not by blood but by loyalty. @kare11 pic.twitter.com/ePcpiuIk6Q