Experts warn of dangers posed by ‘less lethal’ weapons used by police to enforce order and curfews following outrage over the death of George Floyd. 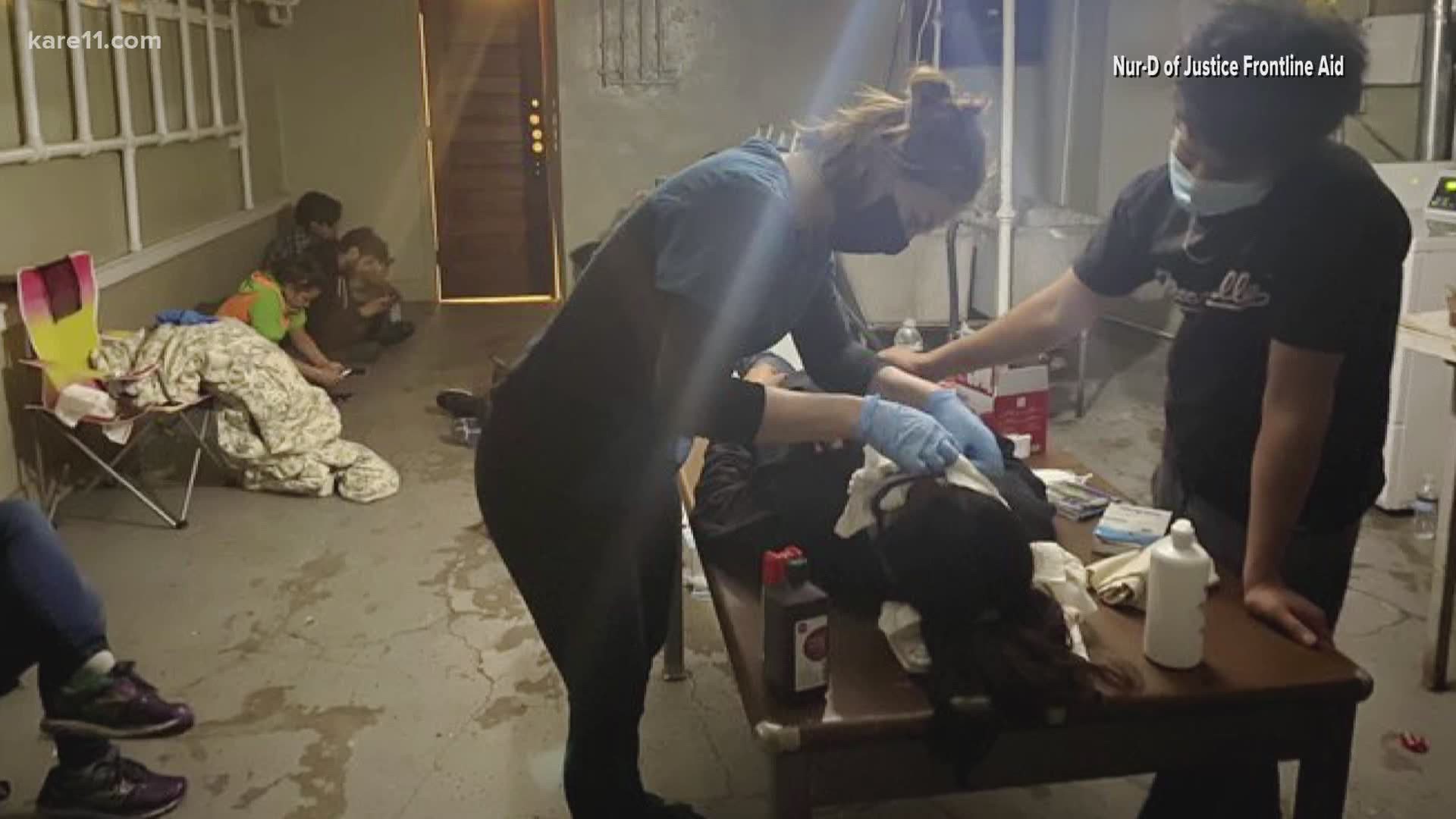 MINNEAPOLIS — As law enforcement officers attempted to curb recent unrest after the death of George Floyd, they fired so-called ‘less lethal’ rounds into crowds, at curfew violators, and at journalists despite well-known evidence that these types of weapons can maim, blind and even kill.

“It felt like I got punched in the face by The Hulk,” said Grace, a 21-year-old woman who was hit right below her left eye while walking back to her car trying to beat the curfew.

Her broken and bloodied face is a painful souvenir for the college student who asked that her last name not be used.

Experts say she was fortunate not to suffer permanent injury from the ‘less lethal’ round known to cause trauma and even death.

Credit: Grace
“I could feel the warm blood roll down my face,” Grace told KARE 11.

“The use of this kind of weapon is incredibly dangerous,” said Dr. Rohini Haar, an emergency medicine physician in Oakland, California. “Especially when they are misused or fired directly at people’s head or face – that’s when you see a lot of permanent disabilities and death.”

To determine if law enforcement was using the less lethal weapons according to safety rules and department policy, KARE 11 asked the agencies what type of rounds they used during the George Floyd protests.

St. Paul and Minneapolis police departments made that information public.

However, the Minnesota State Patrol claims the public doesn’t have the right to know what they fired at citizens.

The streets of Minneapolis and St Paul seethed as demonstrators demanded justice for 46-year-old George Floyd who died beneath the knee of a Minneapolis police officer.

Some peaceful demonstrations were overshadowed by violence as stores were looted and buildings, including the Minneapolis Police Department’s 3rd Precinct, were set on fire.

By Saturday night, May 30, an 8 o’clock curfew was in effect for Minneapolis and St Paul.

That was the evening Grace and her boyfriend, a United States Marine Corps reservist, decided to lend their voice to the demonstration against police brutality.

She says they had attended a peaceful protest outside 5th Precinct and left before the curfew went into effect. However, she says they underestimated how long it would take to walk back to their vehicle.

After the curfew took effect, Grace says the couple was still walking on a side street. They were alone, hoping to avoid the confrontation areas along Lake Street, when police officers suddenly appeared in the intersection in front of them.

Without warning, she says, the officers opened fire and hit her in the face. She doesn’t know exactly what she was hit with, but assumes it was some sort of rubber bullet.

“I could feel the warm blood roll down my face,” Grace told KARE 11. She remembers her boyfriend yelling, “Don’t shoot, you shot her in the face, don’t shoot.”

“Were you rioting, were you committing a crime at the time?” asked KARE 11 investigative reporter A. J. Lagoe.

“No sir,” Grace replied. “We were walking home.”

Blood gushing down her injured face, one eye swollen shut, Grace was carried by her boyfriend to a nearby home where kind-hearted strangers provided medical care and allowed them to stay the night.

“By the grace of God, it just happened to be medics there who helped me stop my bleeding and kept me there until 6 a.m. when it was safe to go out again,” she said.

She is not the only one to accuse law enforcement of firing ‘less lethal’ rounds without warning and at people’s heads.

Freelance photographer Linda Tirado said was blinded in one eye after being hit in the face while covering the protest in Minneapolis.

A federal lawsuit filed by the ACLU claims law enforcement “without any forewarning, deployed less-lethal ballistics and chemical irritants against the demonstrators.”

The lawsuit also states, “Numerous journalists reported injuries sustained as a result of law enforcement’s unforewarned, indiscriminate use of riot control tactics against clearly identifiable members of the news media.”

On Wednesday, lawyers for Tirado filed suit against the city and the state seeking damages.

Minneapolis Star Tribune reporter Ryan Faircloth posted a photo on Twitter of blood running from his head and arm. He said the Minnesota State Patrol twice fired less lethal rounds at his car without warning – blowing out his window.

NBC photographer Ed Ou was himself photographed with blood pouring down his face after being hit in the head with a less lethal projectile.

Known to be deadly

It’s not known just how often police use less lethal rounds or how many people like Grace are injured by them every year, said Dr. Haar who also serves as a medical expert with Physicians for Human Rights.

Many victims don’t go to the hospital, she said.

The study examined cases involving 1,984 people who had sought medical care after being hit. It found 3% died and 15% were permanently injured.

“They can hit really hard and can break bones in the face,” said Dr. Haar. “They can often penetrate the eye and either lodge in the brain or at least cause permanent vision loss. They can break the skull or destroy the neurovascular structures even in your neck or body.”

Because of the known dangers, the United Nations issued protocols this year that state ‘less lethal’ weapons should be a “measure of last resort” and may not be used simply to obtain compliance with an order from a person who is passively resisting.

It also states members of law enforcement “have a duty” to distinguish between those behaving violently and the rest of the assembled crowd.

KARE 11 requested information from local police agencies about the specific types of less lethal weapons being used during the recent protests.

Minnesota State Patrol, which came under heavy criticism after a Twitter video went viral showing officers firing less lethal rounds at residents on their own front porch, has been far less transparent about exactly what they fired at citizens.

The State Patrol refused to list the weapons they used. In an email to KARE 11, Lt. Gordon Shank wrote: “…we do not share tactical strategies that could jeopardize the best interests of public safety.”

KARE 11’s Lagoe retrieved one of the rounds he personally watched State Patrol fire. Lagoe said he saw them often fired without warning at vehicles and people out after curfew. The targets included journalists covering the protests.

The round he recovered is in the same category of munitions St. Paul and Minneapolis use.

A website for the manufacturer describes it as a 40mm crushable foam round.

It comes with a warning that it can expose you to chemicals known to cause cancer, birth defects or other reproductive harm.

When fired it travels at 295 feet per second, the equivalent of 201 miles per hour, according to manufacturer specifications.

The Minneapolis Police Department’s online Use of Force Policy states 40mm launchers are to be used “for the incapacitation of an aggressive, non-compliant subject,” and “unless deadly force is justified, officers should avoid the delivery of 40mm impact projectiles to … the head, neck, throat and chest (in vicinity of the heart).”

Credit: Ben Garvin - KARE 11
Protester hit in the head by less lethal round in Minneapolis.

“I strongly believe that they were aiming for our heads,” Grace said. She has obtained an attorney and is exploring a lawsuit alleging an unjustifiable use of force given that her only legal infraction was being outside past curfew.

There are widespread calls, and lawsuits being filed across the country, demanding law enforcement exercise far more restraint in their use of less lethal projectiles.

Part of that order requires that only the Police Chief or the Chief’s designee at the rank of Deputy Chief may approve the use of crowd control weapons, including chemical agents, rubber bullets, flash-bangs, batons, and marking rounds, during protests and demonstrations.

Similar restrictions are being proposed elsewhere.

Los Angeles Mayor Eric Garcetti ordered police there to “minimize” their use of rubber bullets against protestors after a number of injuries in that city, according to the Los Angeles Times.

Officials in San Francisco are considering a ban on rubber bullets and pepper spray against peaceful protesters. A similar ban has been proposed in Pittsburgh.