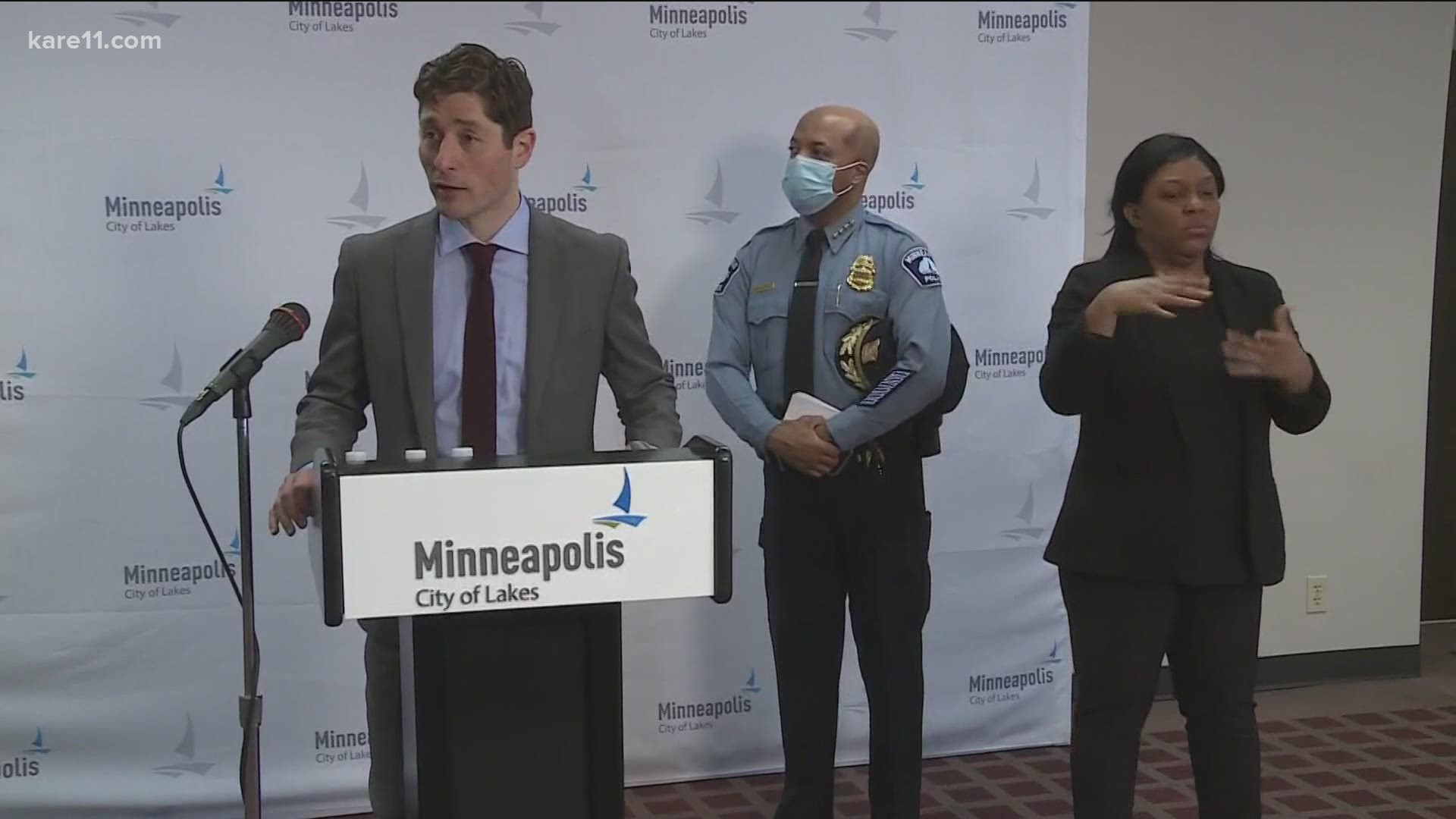 MINNEAPOLIS, Minnesota — The city of Minneapolis has put together resources on its website around trial support and safety.

Chief Arradondo said their main focuses through Operation Safety Net revolve around ensuring that those who gather and protest can do so peacefully, as well as making sure residents, businesses and visitors feel protected and safe.

"In the weeks and months to come, I'm really hopeful that the people of Minneapolis will continue to look out for one another on a daily basis," Mayor Frey said.

The city's Neighborhood & Community Relations Department held its first meeting Wednesday night with neighborhood organizations to share information. They plan to hold these online meetings weekly during the trial.

The city's Office of Violence and Prevention also plans to fund a network of community-based groups that can be activated when tensions are high throughout the rest of the year.

Eric Hansen, the city's director of Economic Policy and Development, is reminding people the importance of shopping local.

"Many of our businesses have been impacted by the pandemic and last year's unrest and are still struggling. We all need to come together and shop local first this year," Hansen said.

The city has also sent out surveys to residents and businesses near 38th and Chicago, also known as George Floyd Square, to determine preferred options for preserving the memorial while reopening the intersection. You can read more about the city's plans, here.

This survey is for those within a six-block radius of the intersection where George Floyd was killed. The city did a previous survey that captured responses on whether and when to reopen the intersection.

RELATED: Minneapolis leaders weigh in on security concerns at 38th and Chicago ahead of Derek Chauvin's trial

"There are certainly times where it is a beautiful community gathering space and I think that needs to be honored and respected, and there are times when it absolutely has been unsafe. Both of those two things are true," Mayor Frey said.

In the past, the city has said they plan on reopening the square after Chauvin's trial. According to the city, the mayor is regularly meeting with the council members who represent the areas, as well as Chief Arradondo and Director Sasha Cotton to assess resources and options for the intersection. Frey and Arradondo are also looking to bolster safety measures in the short term.

"That intersection has received a slew of city services ranging from snow clearance to street maintenance to EMS and 911 response. But what you're referencing is the interference so many officers and EMS responders have experienced, and press by the way, when they go to that intersection and that's accurate," Frey said.

Jeanelle Austin is a community member at 38th and Chicago, as well as a part of the George Floyd Global Memorial.

Regarding a video circulating online of a reporter being denied access to George Floyd Square, Austin said, "People are allowed to come into 38th and Chicago. The last few days we put a pause on that to protect the grieving community out of respect for those who were really suffering in deep grief."

Last Saturday, 30-year-old Imaz Wright was killed near the intersection. During the press conference, Chief Arradondo said two arrests had been made but did not provide further information.

According to Austin, she spent Thursday morning at George Floyd Square with Floyd's eldest aunt. It was her first time visiting the space.

"It was an honor to be able to walk side by side with his family," Austin said.

Austin said the space continues to be a place for healing, community and liberation.

Mayor Frey and Chief Arradondo have both said they want to reopen the intersection while being respectful to the memorial.

Austin said all they're asking for "is for the city to work with us in providing concrete responses to restorative justice, to help us heal, to help us grow together, to help us thrive."

Austin also mentioned that while the city has been talking about different ways to memorialize the area, they have that covered through the George Floyd Global Memorial.

"It's important for us to be able to continue to engage what justice looks like as a part of thriving before reopening the streets," Austin said.

But Chief Arradondo said from a public safety standpoint, they must open up the intersection.

"There's the respect and folks gathering and utilizing that space to pay its respects to Mr. Floyd. At the same time, I'm hearing overwhelmingly from community members who quite frankly are feeling hostage over there at the situation. We cannot allow for that violence to continue," Chief Arradondo said.

The city will be sending out a newsletter that will be available starting next week. You can sign up, here.