Richfield PD says an individual from a separate arrest had falsely used Darrius Strong's name, which resulted in an arrest warrant under his name. 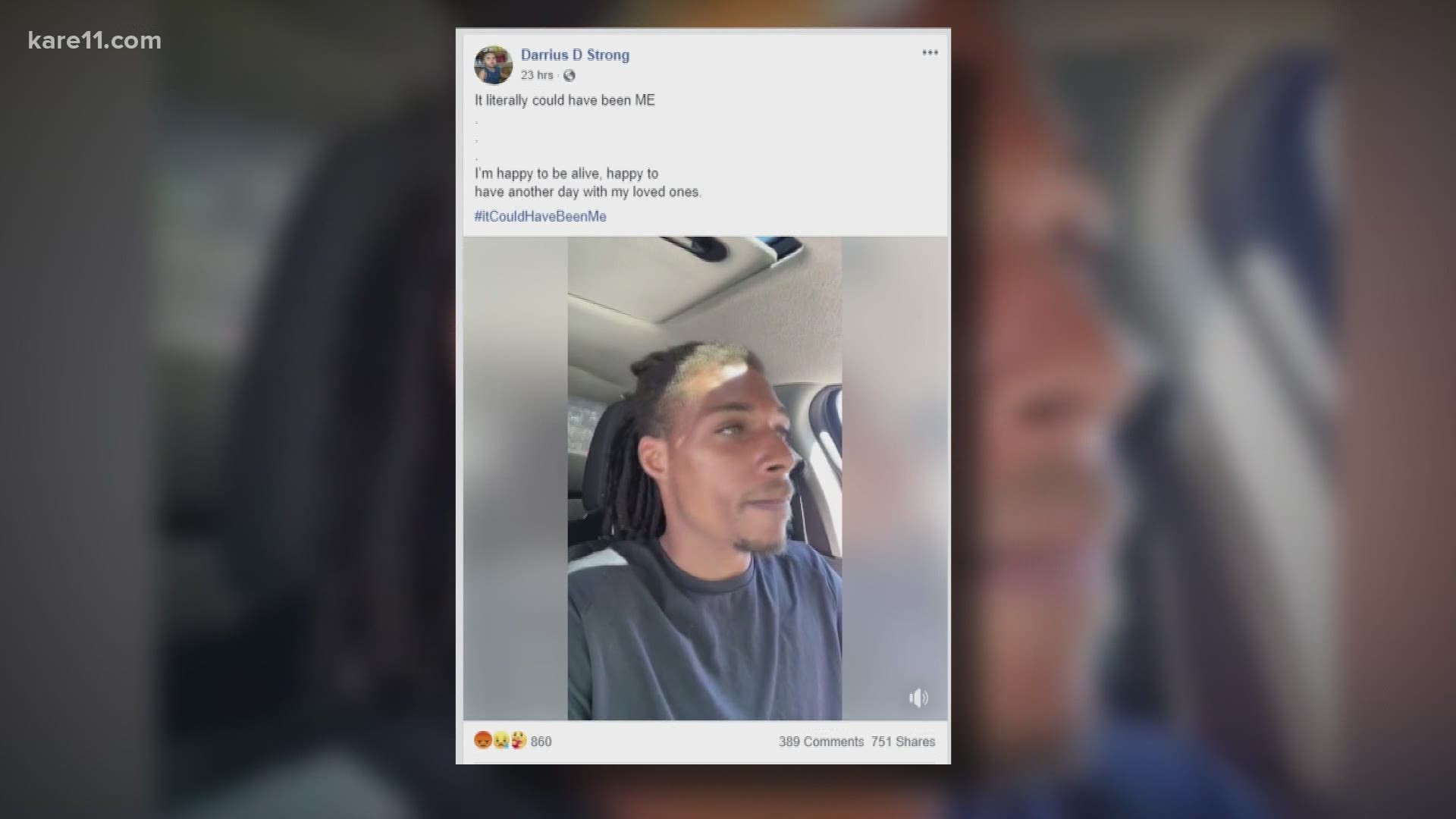 RICHFIELD, Minn. — Police departments for the cities of Bloomington, Edina and Richfield are apologizing for what they call an "unfortunate case of mistaken identity," after wrongfully stopping and detaining a man by the name of Darrius Strong on July 10 in Bloomington.

Strong says he was shaken up after officers detained him for a non-violent warrant issued in his name.

Shortly after, Richfield police say they were able to realize that a suspect from another arrest had fraudulently used Strong's name.

In a Facebook post following the incident, Strong said he wanted everyone who follows him online to know that he "could have been dead today."

"Please-please-please, let me make it back to my fiance, my daughter, my friends," Strong recalls himself thinking.

Strong says he was following the rules and going the correct speed limit at the time he was pulled over.

By his account, officers arrived in multiple squad cars with their weapons drawn, told him to get out of his car, and placed him in the back seat of one of their squad cars.

"George Floyd came into my head ... specifically the clip where they put him in the back and they're doing all kinds of things to him," Strong said in the Facebook post.

The apology went on to state that only one officer approached Strong's vehicle with her weapon at the ready, which the department says was quickly holstered after she determined Strong was being compliant with her commands.

The department says Strong was initially pulled over for a speeding violation.

When the officer ran the plates of Strong's vehicle, she noted he had a felony level warrant out for his arrest, according to Richfield PD.

According to Strong, when asked of the officers why he had a warrant, they said he had a forged check.

"Once again, George Floyd popped in my head," Strong said.

Strong said he doesn't use nor had written any checks. He says the female officer took the time to look into the matter further and ultimately discovered they had the wrong man.

The officer determined that another individual from an entirely separate arrest had falsely used Mr. Strong's name, which resulted in an arrest warrant under Strong's name.

Strong says upon realizing their mistake, officers then uncuffed him on the spot, and took him out of their squad car, which authorities confirm.

Despite the about face, Strong says the situation was ultimately "aggressive" and "non-sympathetic."

"Just remember that ... anything can happen to us, man. Especially black bodies, black people, black men," Strong says near the end of his video. "Make sure you check on your loved ones, your friends that are black, that are traveling in these suburban communities, because it could have gone a whole different route ... and racial profiling's a thing."

"This was no doubt a stressful and emotional experience for Mr. Strong. While they were doing their jobs based on what they knew at the time of the traffic stop, officers regret the stress Mr. Strong felt." The Richfield Police Department said in an online statement. "The three cities will work with the BCA to make sure Mr. Strong’s record is cleared and will continue to have important conversations in our communities regarding police-citizen encounters and how they need to reflect the best of all involved. To promote transparency, the Richfield Police Department anticipates releasing the squad car dash camera footage on Monday."