McMillian, the only bystander to witness nearly the entire interaction between Floyd and police, told the jury, “What I watched was wrong.” 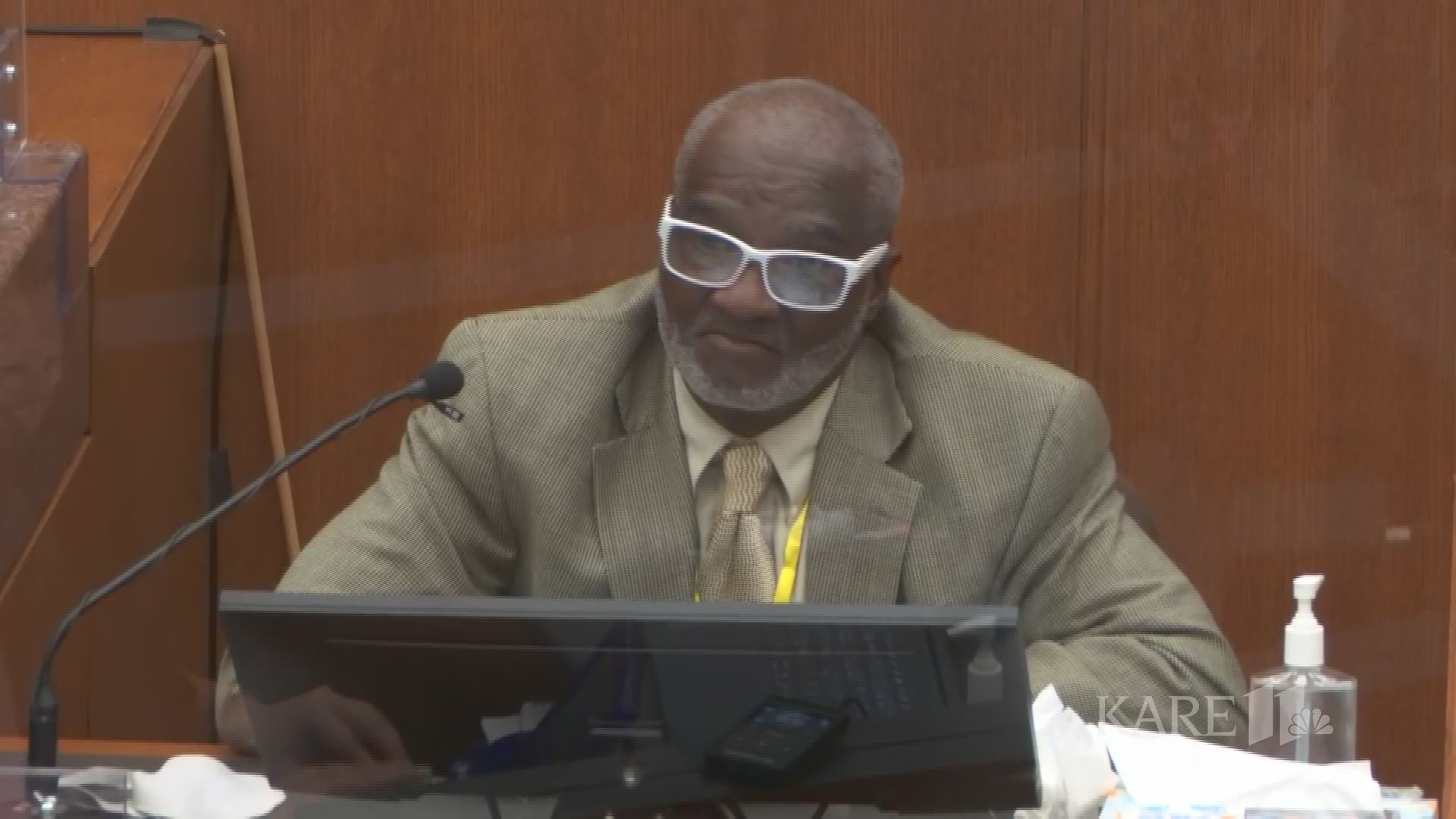 MINNEAPOLIS — Prosecutors in the murder trial of Derek Chauvin showed two never-before-seen video clips in court Wednesday, depicting a conversation Chauvin had with a witness right after George Floyd's death.

Minnesota Assistant Attorney General Erin Eldridge showed the new video during her direct examination of 61-year-old eyewitness Charles McMillian, who was the only bystander to see almost the entire interaction between Floyd and the former Minneapolis police officers.

He can be heard on video urging Floyd to cooperate as Chauvin and the other officers tried to force him into a police vehicle: "You can't win."

However, McMillian revealed in court that this wasn't the first time he'd seen Chauvin -- nor was it the last. The first time he spoke to Chauvin was five days before Floyd's death.

"I pulled up on the squad car somewhere in South Minneapolis and I see Mr. Chauvin and I told him -- like I tell all officers -- 'at the end of the day, you go home to your family safe, and that the next person goes home to their family safe,'" McMillian told the court. He added that he had seen Chauvin around the community before that conversation, too.

After paramedics arrived and left the scene of Floyd's death, McMillian said he had another two interactions with Chauvin.

Eldridge showed videos of those interactions. One, Exhibit 40, appears to be from a security camera. The other, Exhibit 41, is a body camera video from where Chauvin was seated inside a police vehicle. Chauvin's police vehicle changes locations between the two videos. The dialogue in both videos is mostly unintelligible due to a police radio and other noise.

Eldridge, pointing out that the dialogue is hard to hear, asked McMillian what he said to Chauvin. He said he referenced their conversation from five days prior.

"I can't recall but in my mind... I think I said to him, 'five days ago I told you, at the end of the day, you go home to your family safe, and that the next person goes home to their family safe, but today I gotta look at you as a maggot.'" McMillian said on the stand.

"That's one person's opinion," Chauvin seems to say at one point in the body camera video, but the statement he was responding to couldn't be heard in full.

Chauvin also seems to talk to McMillian about Floyd in the video.

"We gotta control this guy, he's a sizeable guy... looks like, looks like he's probably on something," Chauvin can be heard saying.

Eldridge asked McMillian why he spoke to Chauvin after Floyd's death.

"Because what I watched was wrong," McMillian said.

"And did you feel it was important to tell him that?"

Earlier in his testimony, McMillian broke down in tears after watching footage of Floyd's arrest. He told the court that he felt "helpless" watching the footage. Judge Cahill called for a 10-minute break.

Later in the day, the state showed Chauvin's bodycam footage, which had never been shared publicly before. You can read a full summary of Wednesday's events in KARE 11's live blog.

After Eldridge's direct examination of McMillian ended, defense attorney Eric Nelson declined to cross-examine him. Earlier in the trial, Nelson also chose not to cross-examine an unnamed 9-year-old eyewitness.