Outpouring of donations after looting, fires

All across the Twin Cities, donation drop-off sites and pop-up food pantries have been organized to help those impacted by the looting and fires. 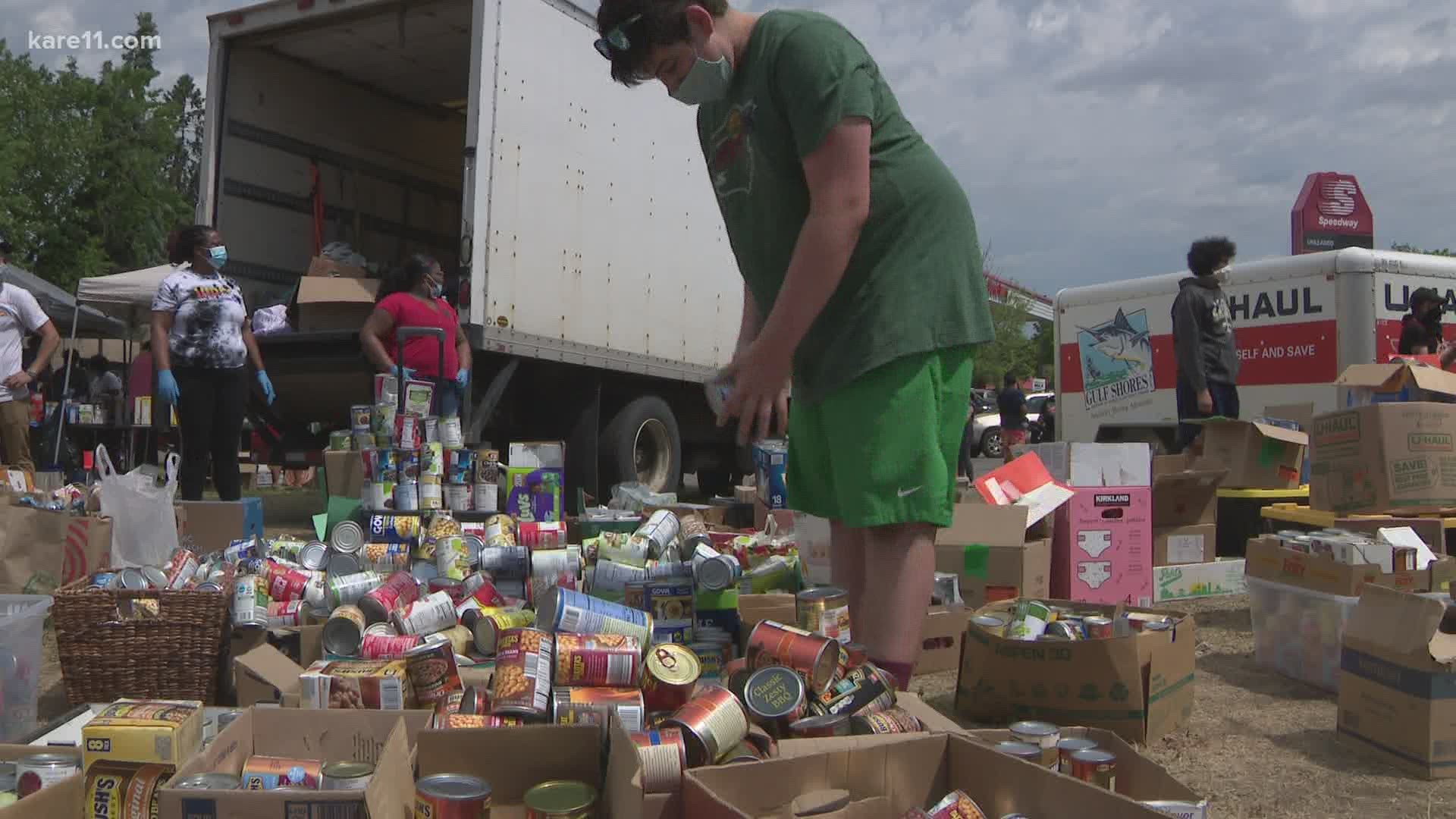 ST PAUL, Minnesota — On Monday morning, a line of people wrapped around the corner of Lexington Pkwy and Central Ave. in St. Paul.

"I'm grateful for this right here," said Kierra Allen, who waited in line with her two kids.

Allen, 27, lives nearby and came out to get some laundry detergent after her neighborhood stores were looted and/or set on fire.

"It's good to do stuff like this. I mean it means a lot to the people too because it means somebody still cares after all the hatred," Allen said.

"Our neighborhoods are torn up right now from the looting and the fires. We have no community stores. Both of my neighborhood corner stores/gas stations have been set on fire and looted," Webbie said.

After helping out at other pop-up food pantries, Webbie decided to start her own on Saturday. She said it's been a comedian and community network.

"One table, two tables, jumped into 40 tables. Maybe 10 tents, truckloads of supplies," Webbie said. "The line this morning started at 9:30. Yesterday the line wrapped around here all the way around this building which was amazing. I just had to have a moment... of crying. I couldn't believe what the community helped me to do through God. So it's just amazing."

All weekend, pictures appeared on social media of large amounts of donations of foods, toiletries and more.

A food drive for kids and their families was held at Sanford Middle School in south Minneapolis and the response was overwhelming.

On Monday, the University of Minnesota's Community-University Health Care Center in Minneapolis held a food and product drive.

"Before COVID, food insecurity was one of the highest challenges that we had and now we're seeing it even worse because of what happened," CEO Colleen McDonald Diouf said.

The center said the best way to help them out at this time is to make a donation through the clinic's website. They'll also be taking more donations of toiletries for kits to hand out to patients and they need more face masks.

"You'll notice we're giving people masks, we're asking them to socially distance whenever possible but we really are worried about the spread of this virus right now as we're seeing the numbers skyrocket in our community," McDonald Diouf said.

She also said they'll continue to see a need for basic items over the next few months.

Webbie also talked about how this crisis will last for some time and she wants to make sure they can keep getting resources to those who need them.

RELATED: Community: why we need to come together right now

"It's still Justice for George through all of this," Webbie said. "We want to see justice but at the same time we gotta make sure our community thrives."

Webbie said they need more places to store donations at night. You can contact Webbie at shaycaresinfo@gmail.com.

You can find more resources through Second Harvest Heartland and Hunger Solutions.

More places to help can also be found, here.