'It's not just a period or moment.' A look at the past, present and future of civil rights in the Twin Cities 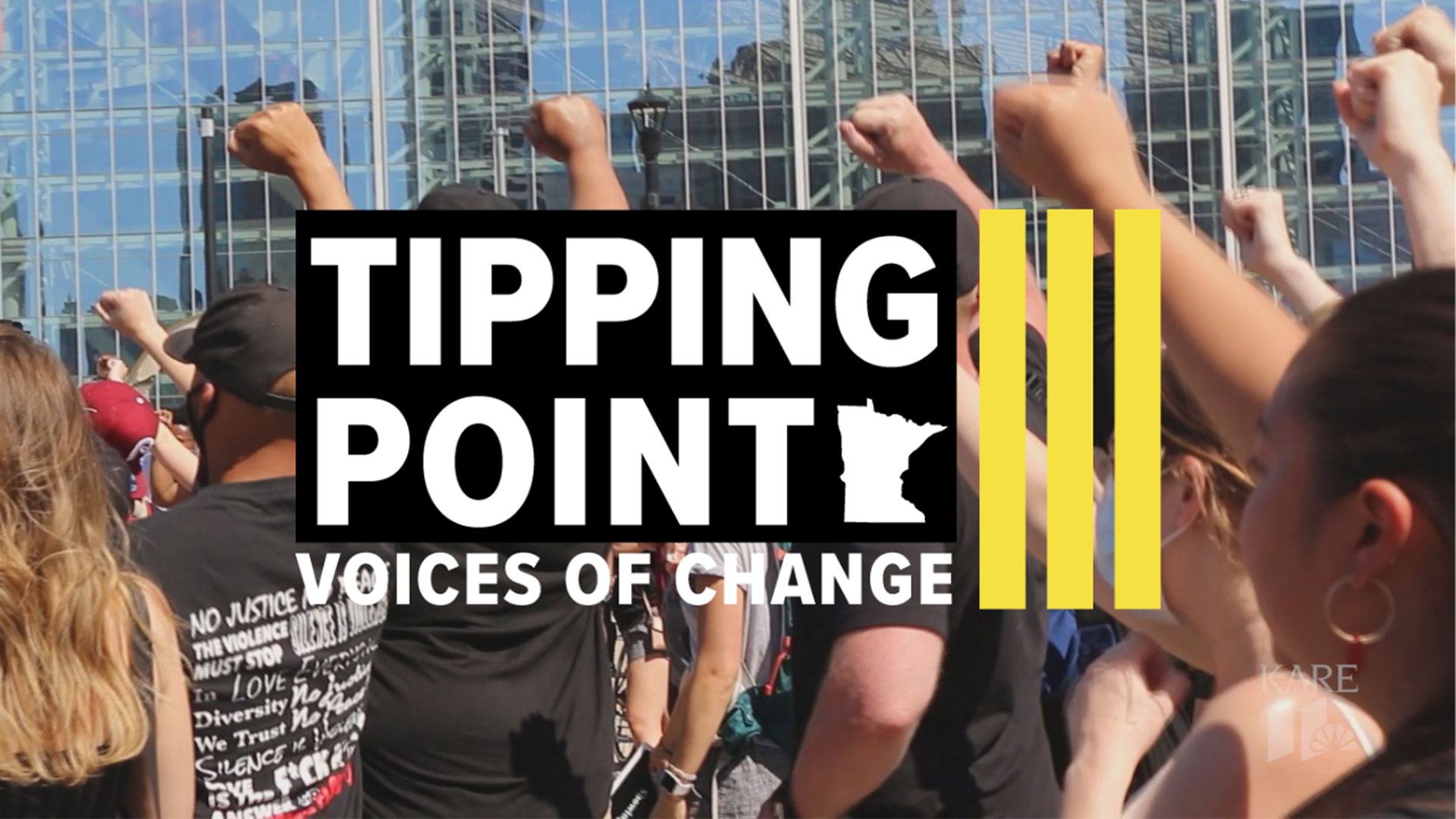 MINNEAPOLIS — There are long withstanding problems facing minority communities in the Twin Cities. Issues like access to affordable housing and equal educational opportunities. Problems that have impacted families for generations.

But for Acooa Ellis, Senior Vice President of Community Impact at the Greater Twin Cities United Way, the biggest systemic issues facing communities of color in the Twin Cities boil down to two things: racism and denial.

"Everything else is a manifestation," she says. Examples of that look like disproportionate discipline for Black and brown children that act out in an educational setting. She says racism in housing looks like different mortgage rates for people of color who have the same credentials as a white borrower. It's job centers being located in areas that don't have consistent access to transit.

"Racism and systemic racism show up in a number of ways. And it's so hard and complicated to explain because it's baked into all of our systems. And our denial of that for years has meant that we haven't had to do something about it," says Ellis.

At the United Way, Ellis leads all grant making, systems change efforts and operations of their statewide resource help line. She's also seen firsthand how George Floyd's death and the following civil unrest has impacted the organizations and communities working with the United Way.

"It's just a really tough time, you know, trying to understand how to navigate [and] flex the work that you're doing to meet changing needs" she says. "They're trying to figure that out while they navigate their own personal grief, trauma and in challenges. It's just an incredibly tough time."

A witness to history

At 90 years old, Dr. Josie Johnson has lived through a lot of ups and downs throughout the history of civil rights in America. She's played a role in much of it, too. Forever an activist, Dr. Johnson started campaigning against poll taxes with her father when she was a teenager in Texas. She's an author and educator, and the first African American to serve on the University of Minnesota's Board of Regents. She also helped create the school's Office of the Associate Vice President for Academic Affairs, focusing on minority affairs and diversity.

Dr. Johnson has worked with the Minneapolis Urban League and co-chaired the African American DFL Caucus in Minnesota. She's been a campaign manager and chief of staff to multiple politicians, and in 2008 served as a delegate at the Democratic National Convention where she cast her vote for America's first Black president, Barack Obama.

Needless to say, she's been a witness to some of the biggest moments in recent history. In May 2020, that included the death of George Floyd.

"It was a very painful, hurtful experience because as a Black community, we have always known that our black men are abused by the police department and often killed," she says. "So to actually see the police officer hold his knee on the neck of an innocent man was the most hurtful thing to see. And yet I thought, thank God for the bravery of the young photographer... who was brave enough to take that picture."

The world saw the video of former Minneapolis police officer Derek Chauvin holding his knee on Floyd's neck for more than nine minutes, and that video set off a chain reaction of protests, both peaceful and violent, across the country.

For Dr. Johnson, the coverage and reaction to Floyd's death falls into a pattern she's seen before.

How to be an ally

To both Acooa Ellis and Dr. Johnson, allyship is a lot more than saying you support Black Lives Matter, or engaging in performative activism. It's real, challenging work.

"It's understanding. It's studying. It's not easy. And it isn't something you can go and have an integrated birthday party or go to the park and walk around holding hands," says Dr. Johnson. "It is an understanding of what the people that you identify as allies need and what you are honestly able to provide."

When asked how white people can be allies to Black and brown communities right now, Ellis says it's complicated to answer, because it's such an individualized question and depends on the person.

"You have a lot of folks who are, you know, tend to be woke or are really working hard to understand critical race theory, for example, and can spout things but have not looked internally," Ellis says. "So they end up smacking people over the head with their understanding or weaponizing that awareness and actually doing more harm than good."

RELATED: 'I can't watch another video': Why the constant stream of Black people harmed or killed on video is creating its own trauma

"For anybody who seeks to be an ally, it requires internal, consistent self-reflection and understanding that this is a journey. That people are dynamic, that we're constantly understanding, deepening our awareness of our identities and how they intersect, and what that means for how we show up in the world and engage with the world."

And for Dr. Johnson, education is key.

"It takes on a commitment that's not just a period or a moment," says Dr. Johnson. "And unless we take that assignment, study, talk, hear and act, it will go on forever."

On protesting and activism

Hundreds of people protested in the streets of Minneapolis over the summer. Calls to defund the police and "justice for George Floyd" remained mostly peaceful. However, in the immediate aftermath of Floyd's death on May 25, multiple businesses and buildings in Minneapolis were burned, looted and destroyed during several nights of riots.

"I believe our young people believe that if it's heard often enough, or if you can feel my anger, and if you can understand how deeply etched racism and supremacy are in the system, in the laws, in the policy, in the behaviors, that if you saw that something other than protesting works, you would try that, too," says Dr. Johnson."

"Our young people, many have grown up in an environment in which nothing really works," she says. "We haven't seen that studying hard, working hard, observing the laws, understanding what works and what doesn't. They haven't seen a positive result of that."

1 / 37
Caroline Garcia
A big message from a little girl. This picture was sent to us by Caroline Garcia of West Saint Paul from Friday's demonstrations near Lake and Hiawatha.

With the exception of a few marches and protests, the Twin Cities have remained mostly quiet since the end of the summer. But just because things seem somewhat back to normal, doesn't mean people have given up on making change.

"When you think about the unrest that is occurring in our community... it really is a protest of the status quo. And the status quo is held in place by power. And until folks are willing to reevaluate where the power exists -- who holds it? And how is leveraged? Which is uncomfortable, which is why it hasn't happened -- it's going to be a lot longer before we see very meaningful, markable progress."

"Keep on keeping on"

You might understand if Dr. Johnson was skeptical about seeing progress come from the current moment in civil rights history. After all, for all the strides we've made as a country, racism and disenfranchisement are still prevalent in modern America.

"I'm always so proud of Black people who continue to keep on keeping on. Because from what we have seen historically, from early days of working in the fields and being beaten and lynched and abused in so many ways for, us to still have the belief that as a collective we have to hang in there and keep at it," Dr. Johnson says.

"We're still here. Still here. And fighting for fairness and justice for all our people."

She's also impressed with the level of engagement she's seen from young white people and the ability for Black and white citizens to talk about important issues. "I just hope that it's heard and that it lasts for a minute," she says.

And for Acooa, now is the time to step up and make an impact for those that are counting on us, but it's also important to take time for ourselves.

"Give yourself time and space to not be OK, and then put in the effort to heal and get back at it," she says.

"We can't take our eye off the ball, but that doesn't mean we can't take a break. To preserve ourselves, our self care is more important now than ever because this work is so incredibly exhausting and it's grueling."