Police union president Bob Kroll says he will not resign

The controversial head of the Minneapolis Police Federation sat down to discuss his reaction to George Floyd's death, police reform, and whether he should resign. 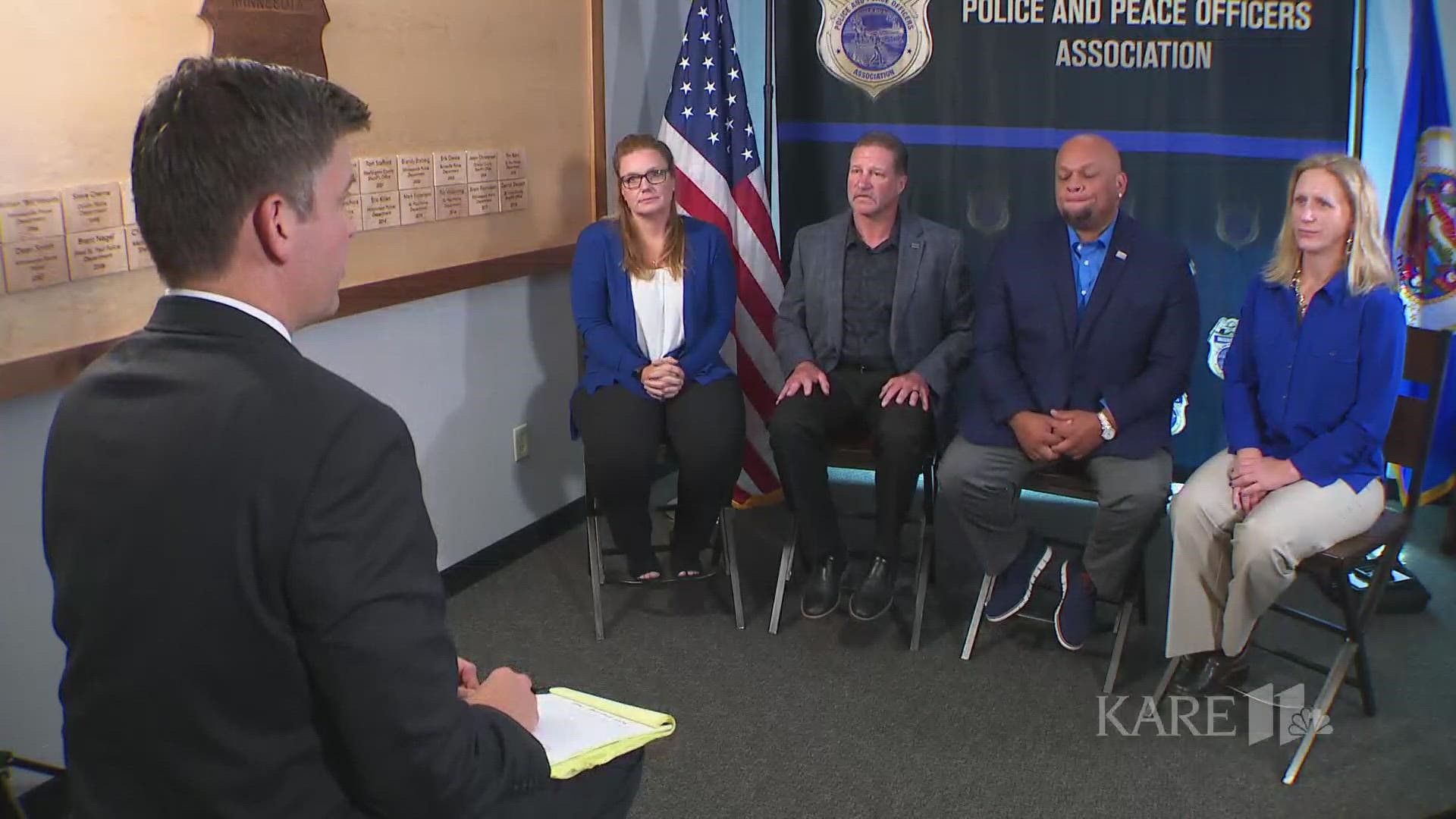 MINNEAPOLIS — Minneapolis Police Federation President Bob Kroll broke four weeks of silence Tuesday, sitting down with reporters to address the officer-involved death of George Floyd, potential police reforms and calls for him to resign his union post and turn in his badge.

KARE 11's Lou Raguse sat down with the embattled union head and opened the conversation with a simple question: Where have you been, and why have you not been talking?

"It was just too chaotic. Our officers and the citizens were in too much jeopardy," Kroll said. "There were riots that occurred for a week afterwards. We had officers getting injured. We had citizens getting injured. It was too chaotic, and to come out, we didn’t want to add to the fire like some of our political leaders have done."

The spark that lit the fuse to all that chaos was the video of George Floyd dying while being restrained by former Minneapolis officer Derek Chauvin. For nearly 8 minutes Chauvin sat with his knee on Floyd's neck, and Kroll insists he is among those who were angered by what he saw.

Kroll: "It was sickening. It’s something that should never have occurred. No officer can condone that. Ourselves included."

Raguse: "Is what Officer Chauvin did legal?"

Kroll: "That’s for the courts decide. In my opinion, no. But that’s certainly for our criminal justice system to decide in the end.

Raguse: "And is what Officer Chauvin did right?"

Kroll: "Again, no. In my mind, no. I don’t think any officer would say that it’s right. Absolutely not."

The union president said he has no qualms about the decision of Mayor Jacob Frey and Police Chief Medaria Arradondo to fire Chauvin almost immediately. He said that dismissal will not be challenged, but that the firings of J. Alexander Kueng, Thomas Lane and Tou Thao are far less clear. 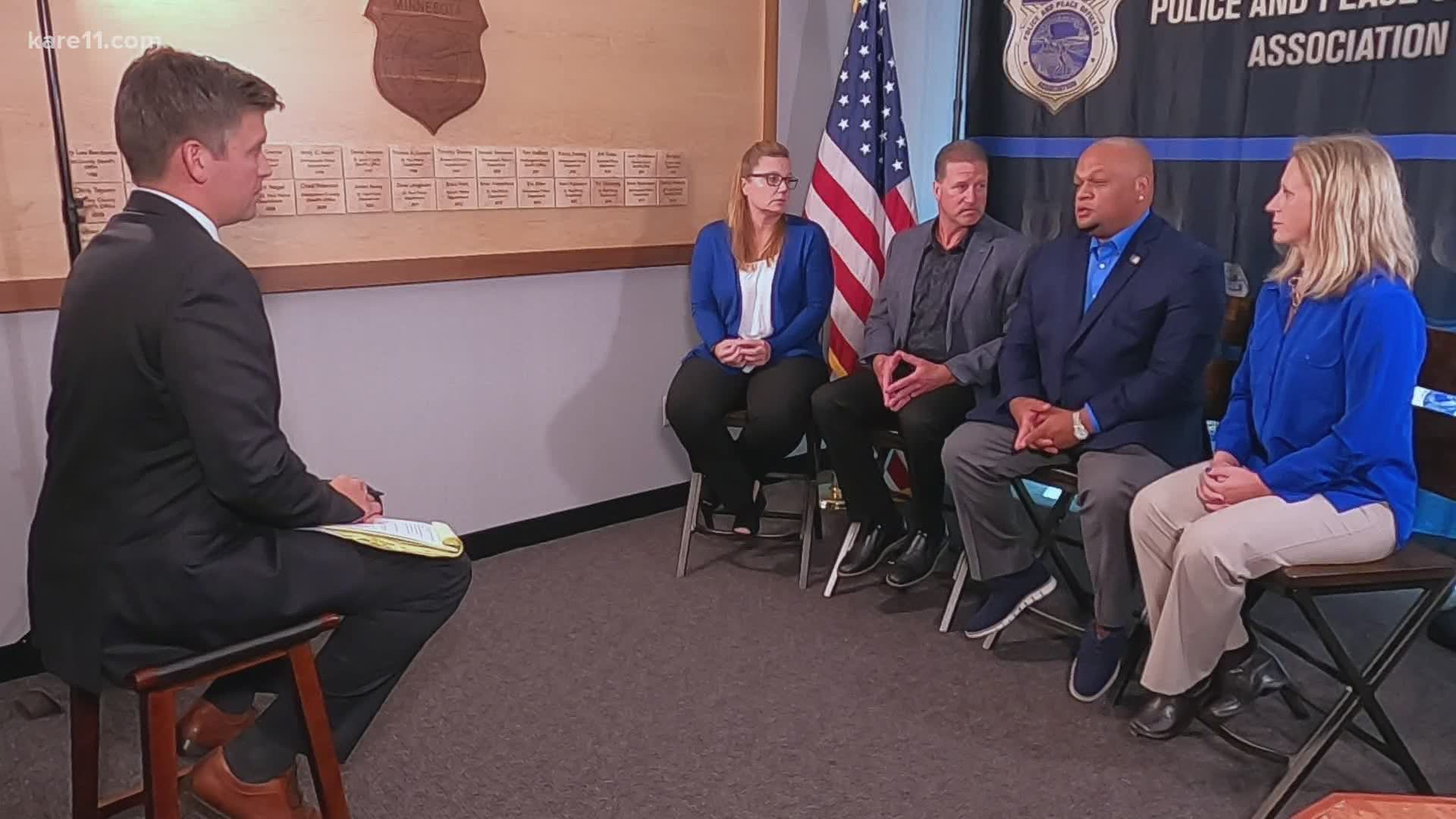 "We’ve got a pretty good picture of what Chauvin did," Kroll said. "It’s easy to form judgment there and terminate, which we were able to make a quick decision that yes, we’re not going to represent his employment. But from the video we saw, we can’t even see two of the other officers in it."

Perhaps the most public outcry in the wake of Floyd's death, besides that the four officers be dismissed and criminally charged, was for Kroll to resign. In early June former Minneapolis Police Chief Janee Harteau posted on social media a letter allegedly written by Kroll to union members, expressing support for the officers involved in Floyd's death.

In the letter, Kroll says the four officers, whom he did not name, were "terminated without due process." Harteau called for Kroll to turn in his badge. "This is the battle that myself and others have been fighting against," she posted on Twitter.

Harteau's call was soon echoed by a number of other organizations, including the AFL-CIO, and a series of public protests targeted the controversial union chief.

Raguse: "There have been calls from the public for you to resign as union president. Do you plan on resigning?"

Kroll: "No, and I’ll tell you why. I’ve got nothing but feedback from the membership and the board, and I actually had discussions with the chief. Would it help if I left? And what I’ve gotten for feedback from the membership is my leadership is needed particularly now. Not that this board isn’t capable of succeeding without me. I’ve been mentoring Sherral (Schmidt, Federation VP) for years and we have a succession plan. But the board and I have decided now is not the time to bail, if you will."

Raguse: "Has Chief Arradondo asked you to resign?"

Kroll: "No... The chief and I have always had a very good working relationship. Better than any of his (predecessors). He’s an honest, truly nice man. I consider him a friend... I’ve socialized with him more than any other chief. I don't agree with lack of leadership in current times since this incident. We have a different opinion there. But I did say if leaving would help, and he concurred, he said yes, I think it would, but you need to leave on your terms. So that’s where we left it."

Raguse: "Did he ask you, are you going to leave?"

Kroll and his union associates who sat in on the interview take exception to the suggestion that the Minneapolis Police Federation is the biggest impediment to real change in the department and the modernizing of the city's police force. Federation Director Rich Walker Senior called the assertion "ridiculous."

"For that to break down and for public outcry to happen, then for those same people to turn around and say it’s our fault when we’re not the only ones sitting at that table (negotiating)," Walker said. "We don't make decisions for the city. The only decision we make is whether we’re going to defend our members of our union who pay dues to be a part of our union."

Walker also went out of his way to emphasize that while Kroll is union president, he believes he takes more blame from the public than he should.

"I also want it to be known that a lot of people think President Kroll is acting on his own and making his own decisions and that’s absolutely not true," Walker said. "We have a board of 10. We discuss as a board. Absolutely he’s our president, he’s in the public eye, but he is mimicking what our board is telling him, from what our members are telling us. So he doesn’t act alone. It’s an absolute group decision."

"Across the country right now there is a push for police reform, do you believe that MPD needs reform?" Raguse asked.

"We’re willing to be a part of it," Kroll said.

The death of George Floyd sparked protests across the globe that continue a month later.

Raguse: "What can be done to stop people, often Black men, from getting killed by police in manners such as seen on the George Floyd video?"

Sgt. Sherral Schmidt, Federation VP: "If we could solve that, we’d be heroes. But it’s such a complex thing. We don’t have the magic answer for that, and I wish we did."

Kroll joined the Minneapolis Police Department in 1989, and became union president in 2015. He has been a vocal critic of both city leaders and police administration, and has butted heads with his bosses on a number of occasions. In April of 2019 Kroll and Minneapolis Mayor Jacob Frey engaged in a public battle over so-called "warrior training," which Frey labeled "fear-based." Kroll told the mayor the union would fund that training themselves.

In October of that year, then-chief Harteau banned officers from wearing their department-issued uniforms to a rally for President Donald Trump at Target Center. Kroll responded by printing up "Cops for Trump" T-shirts that union members wore to the rally. The president called Kroll up onstage during the rally.