Derek Chauvin trial to be separate, now set for March 8

Legal documents filed Tuesday by Judge Peter Cahill say the COVID-19 pandemic and courtroom space limitations are the reason for separating the trials. 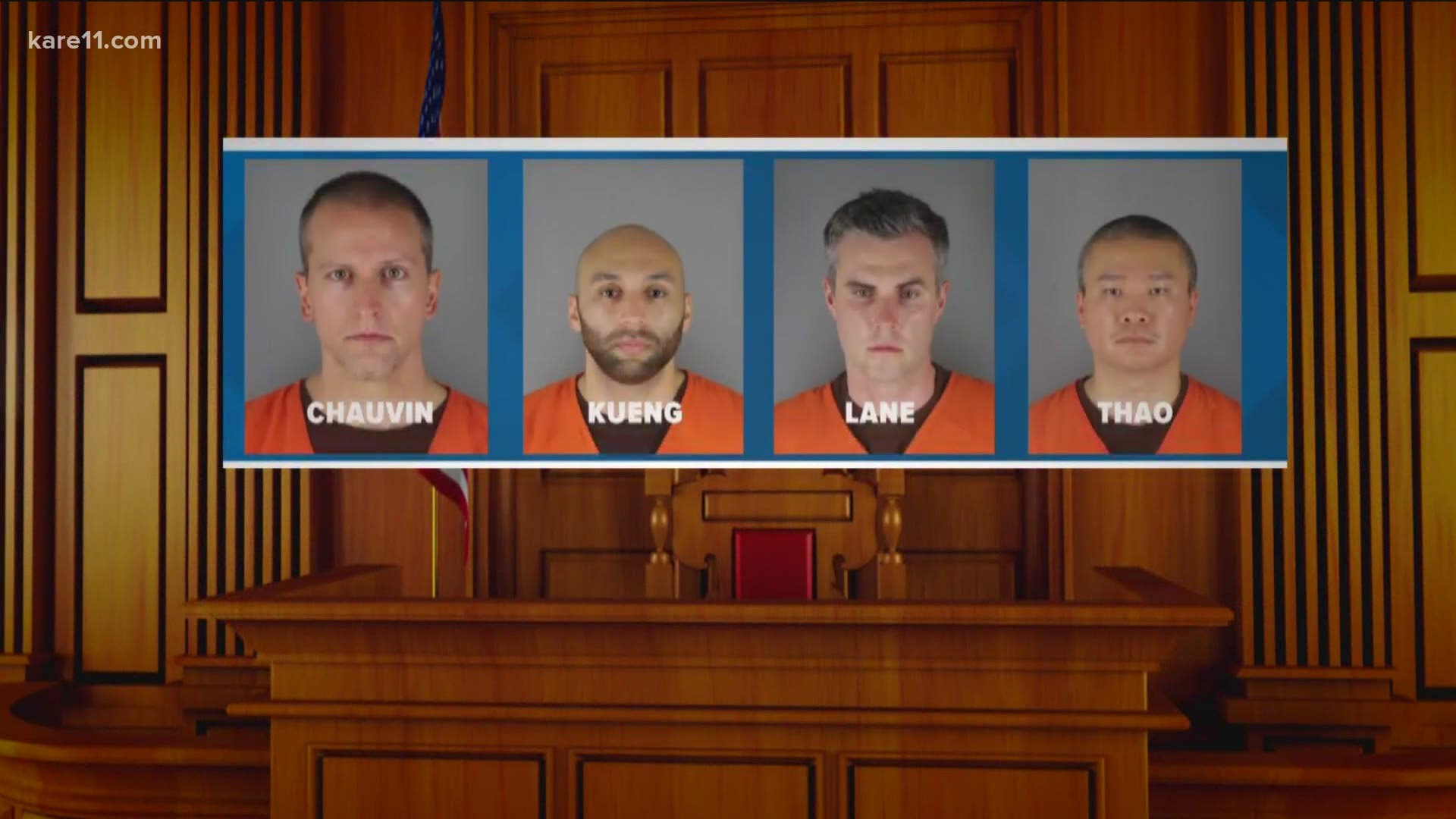 KARE 11's Lou Raguse first reported Monday that Chauvin's trial will begin March 8, while Tou Thao, J. Alexander Kueng and Thomas Lane will be tried together in a proceeding set to begin Aug. 23.

That report was backed up by legal documents filed by the office of Hennepin County Judge Peter Cahill Tuesday morning.

I have also confirmed the trial of Derek Chauvin will be held separately, on March 8 as planned -- while the trial of the other three former officers in the George Floyd case will be rescheduled for August 23. The judge will file his order in the morning, according to my sources

Cahill's latest legal order makes it clear that the ongoing COVID-19 pandemic and space limitations, even in Hennepin County's largest courtroom, make it impossible to hold a trial for four defendants while complying with existing safety guidelines.

"The physical limitations of courtroom C-1856, the largest courtroom in the Hennepin County Government Center, make it impossible to comply with COVID-19 physical restrictions in a joint trial involving all four defendants beginning March 8, 2021, given the number of lawyers and support personnel the parties have now advised the Court are expected to be present during trial," Judge Cahill wrote.

Judge Cahill lays out some jury selection rules in the order. Very notable is that although the Chauvin case begins March 8, jury selection could take three weeks and testimony might not begin until March 29. pic.twitter.com/7qH642ZZek

The judge also stated that while the State believes that the COVID situation will be much improved by June due to vaccinations, the Court is not as optimistic given news reports detailing problems with the vaccine rollout.

Minnesota Attorney General Keith Ellison, who is leading the prosecution, released a statement disagreeing with the court's decision to separate the trials.

"We respectfully disagree with the Court’s decision to sever three of the defendants from the other and its ruling on the timing of the trials," Ellison said in his statement. "As we argued several months ago, and as the judge agreed in his November ruling, we believe all four defendants should be tried jointly. The evidence against each defendant is similar and multiple trials may retraumatize eyewitnesses and family members and unnecessarily burden the State and the Court while also running the risk of prejudicing subsequent jury pools."

Ellison also disagreed with the court's reasoning of COVID-19 restrictions for separating the trials.

"It is also clear that COVID-19 will still be a serious threat to public health in 8 weeks’ time," Ellison said. While we are confident that the Court has established protocols to reduce the risk of COVID-19 transmission during trial, we believe, and independent public health experts agree, that with the advent of the vaccine the threat will be significantly abated by mid-year for everyone participating in or with an interest in this case. Nevertheless, we are fully prepared and look forward to presenting our case to a jury whenever the Court deems fit."

"The State did not engage in any intentional violations of discovery rules," the order states. "The State has not acted in bad faith."

In his order, Cahill also denied Chauvin's request to move his trial to later in the summer, granted Chauvin's team up to 15 peremptory challenges during jury selection, and ordered that the identities of jurors in both trials will remain confidential until the Court specifies.

Last week, Judge Cahill heard separate motions to delay the trial to the summer and said he would take the motions under advisement.

In early December, defense attorneys for former officers Derek Chauvin and Tou Thao filed motions asking the court to delay the trial until July 5, accusing prosecutors of violating a court order to share discovery material with the defense.

Then in late December, prosecutors filed a motion to delay the trial until June 7 due to the uncertainty surrounding the COVID-19 pandemic. In their motion, prosecutors said the coronavirus vaccine will be more widely available in early July rather than in March.