Hair so high, he could touch the sky

The 'Mohawk King,' who holds the world record for the tallest spike mohawk, lives in Minnesota, don'tcha know? 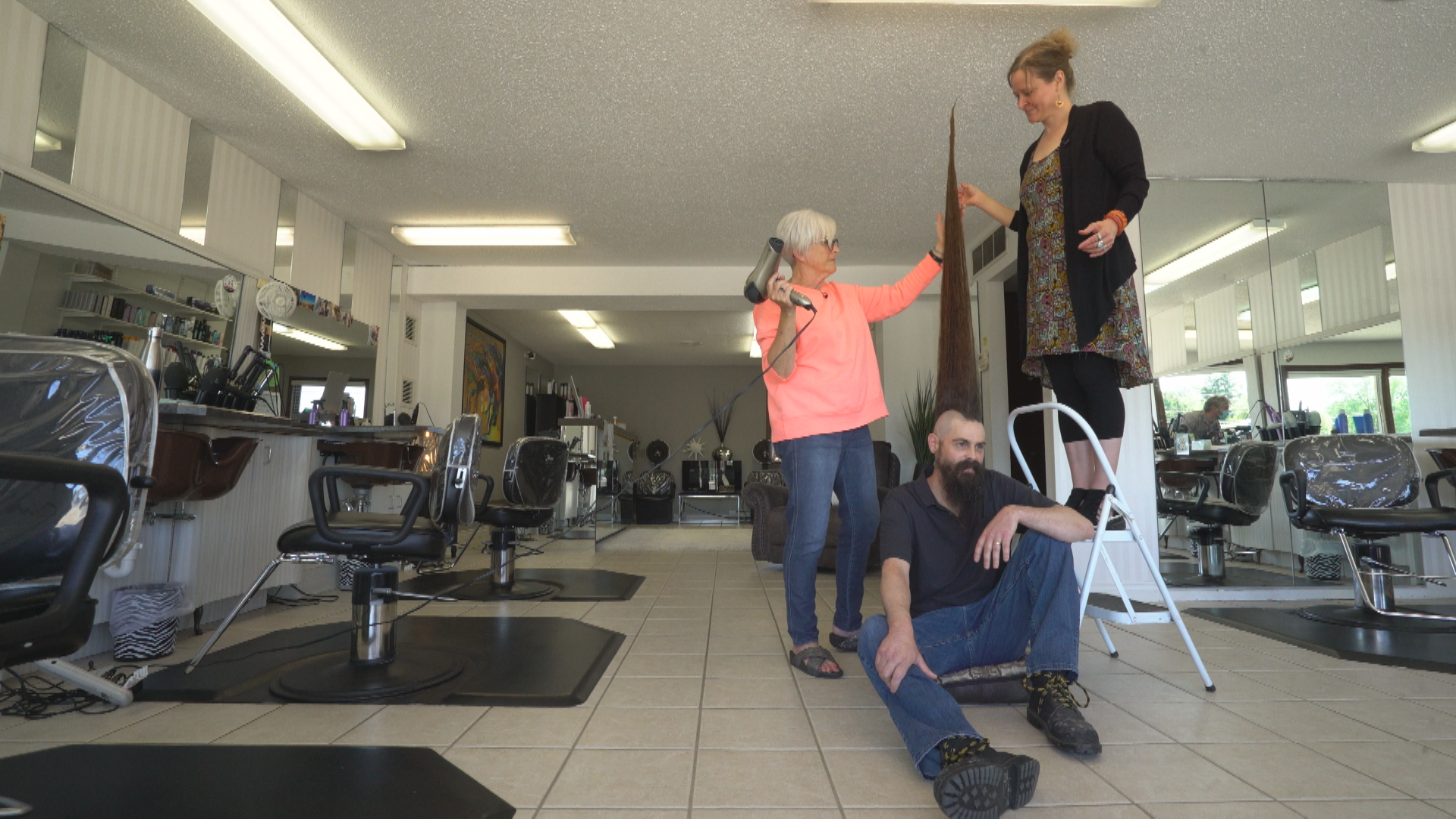 PARK RAPIDS, Minn. — When you come to the Family Hair Affair and Day Spa in Park Rapids, you might expect hours of soothing self care. Maybe a hair cut, maybe a manicure or a pedicure.

That's not what Joe Grisamore comes to do though. Instead of all that, he comes to see Kay Jettmann for one thing – to get his hair as high as possible.

"Kay and I had worked for a long time, as far as how to make this all happen," Grisamore said. "We just [did] it without ratting it, laying on the floor – different hair sprays – I don't know, it was a big trial and error."

As the world record holder for the tallest Mohican or the 'fan mohawk,' Grisamore thought why not try to hold the record for the tallest spike mohawk. He had the long hair, of over 50 inches long to make it happen.

So he recruited Jettmann to help in his endeavor, which also involves his wife Laura Grisamore holding his hair taut while Jettmann works on it from all angles. On Monday, they officially got word that he indeed has the tallest spike mohawk in the world, beating former record holder Kazuhiro Watanabe from Japan.

"I've been awarded the Guinness world record title for the tallest spike mohawk is the official title," Grisamore explained. "That was measuring in at a whopping 50.9 inches."

"Of the two titles that exist, I now hold them both!" Grisamore said with a shy smile on his face. "Laura wanted me to be humble and not do the second one. I figured if it's out there and it exists!"

"Hey!" Jettmann butted in. "It's there. Someone else would take it."

Getting there, takes a little bit of patience, a lot of hair spray, and a lot of pulling. Laura is already a pro. While Grisamore sits on the ground, Laura steps onto a step ladder and holds the pieces that Jettmann sprays and passes to her, taut. Tight enough to maybe cause some discomfort.

After all, they say pain is beauty and beauty is pain. All throughout the process, Grisamore grimaces and groans. He said his scalp is sensitive.

So why would anyone want to go through this? Well, Grisamore said, a little bit of levity in a time like this couldn't hurt – at least for the others.

Now with small town Minnesota on the global map, getting his hair to graze the clouds...is all just for funsies.

Even if the Mohawk King only reigns as long as mother nature wants him to. With the mohawk so tall, Grisamore can't do much outside, especially on a windy or humid day.

However, he said in the end, as long as he can provide some smiles, it's all worth it. He has to fold his mohawk to fit in his truck anyway.