Jake Patterson says he will plead guilty in a letter written to KARE 11 reporter Lou Raguse. 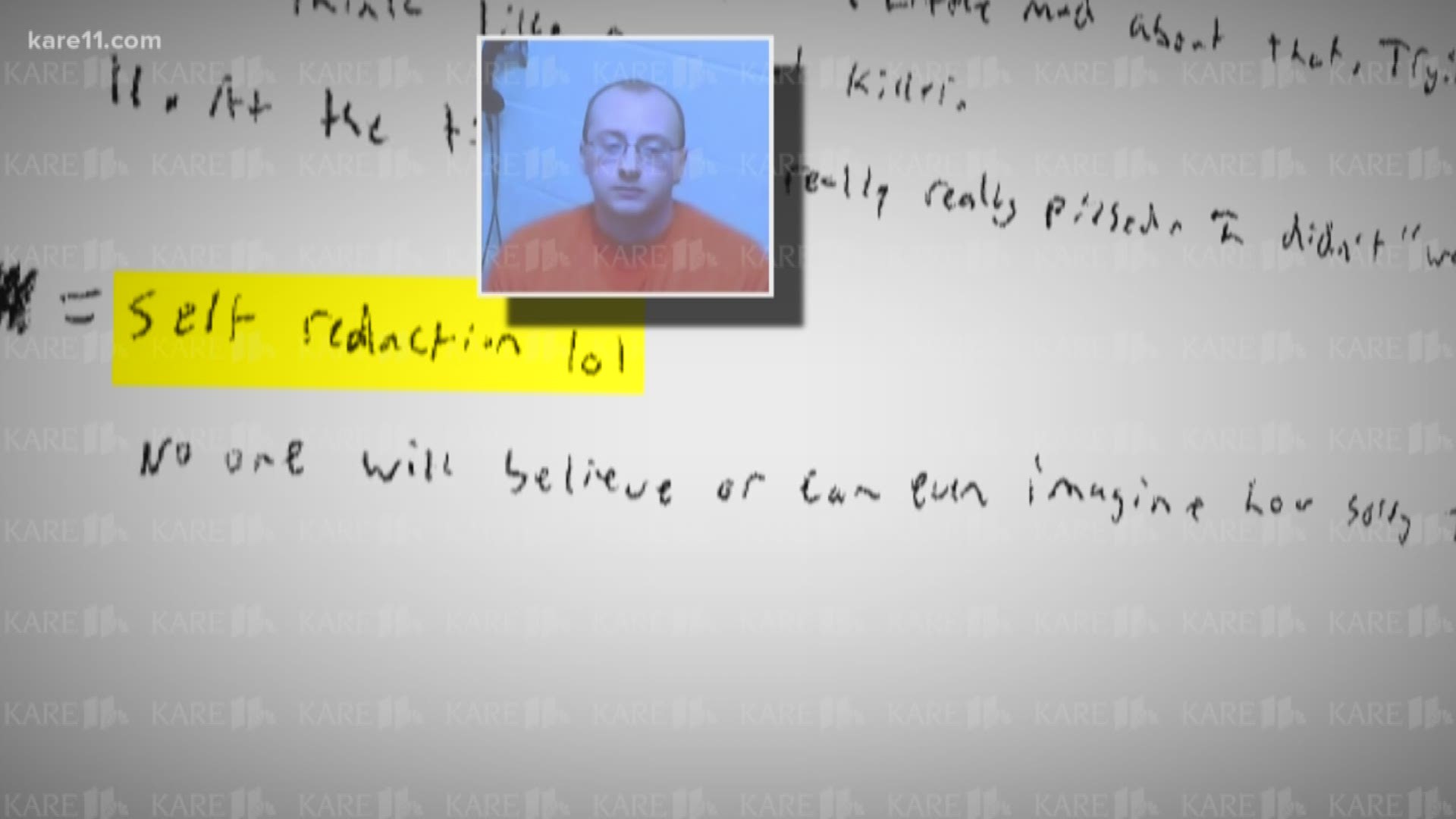 MINNEAPOLIS — The letter arrived in a simple white envelope and featured small handwritten addresses. Two red stamps appeared on the front and back of the envelope to indicate this letter was sent from the Polk County jail. The recipient is KARE 11 reporter, Lou Raguse. The name of the sender is Jake Patterson.

The letter itself is a torn portion of a sheet of paper. The writing is small and disjointed. Abbreviations like IDK are used in a conversational, text-like tone. The letter appears to be folded like a paper airplane and begins with, "Hi, IDK if I'll actually send this."

Jake Patterson is jailed while awaiting trial in Barron County on charges of kidnapping Jayme Closs and murdering her parents. In the letter, the man accused of kidnapping Jayme Closs says he plans to plead guilty and says he doesn’t want her family to worry about a trial. He writes that he never returned to Barron after the kidnapping, and that he only followed the news of Jayme’s disappearance through news updates on his phone. When asked when he realized he was capable of doing something like this, he replied, “This was mostly on impulse. I don’t think like a serial killer.”

(Read the full transcript of the letter below)

Raguse sent a letter to Patterson on Jan. 17 with questions about the case which were not included in the court file, questions many in our community wanted to know the answers to, including whether Patterson plans to plead guilty. Patterson did not respond to that letter.

Raguse sent a second letter on Feb. 19 that included additional questions and began by saying, “I’m a reporter for KARE 11 News in Minneapolis and have been covering the case since Jayme disappeared. I have many questions that have not yet been answered through the court filings. Please write back if you can.” 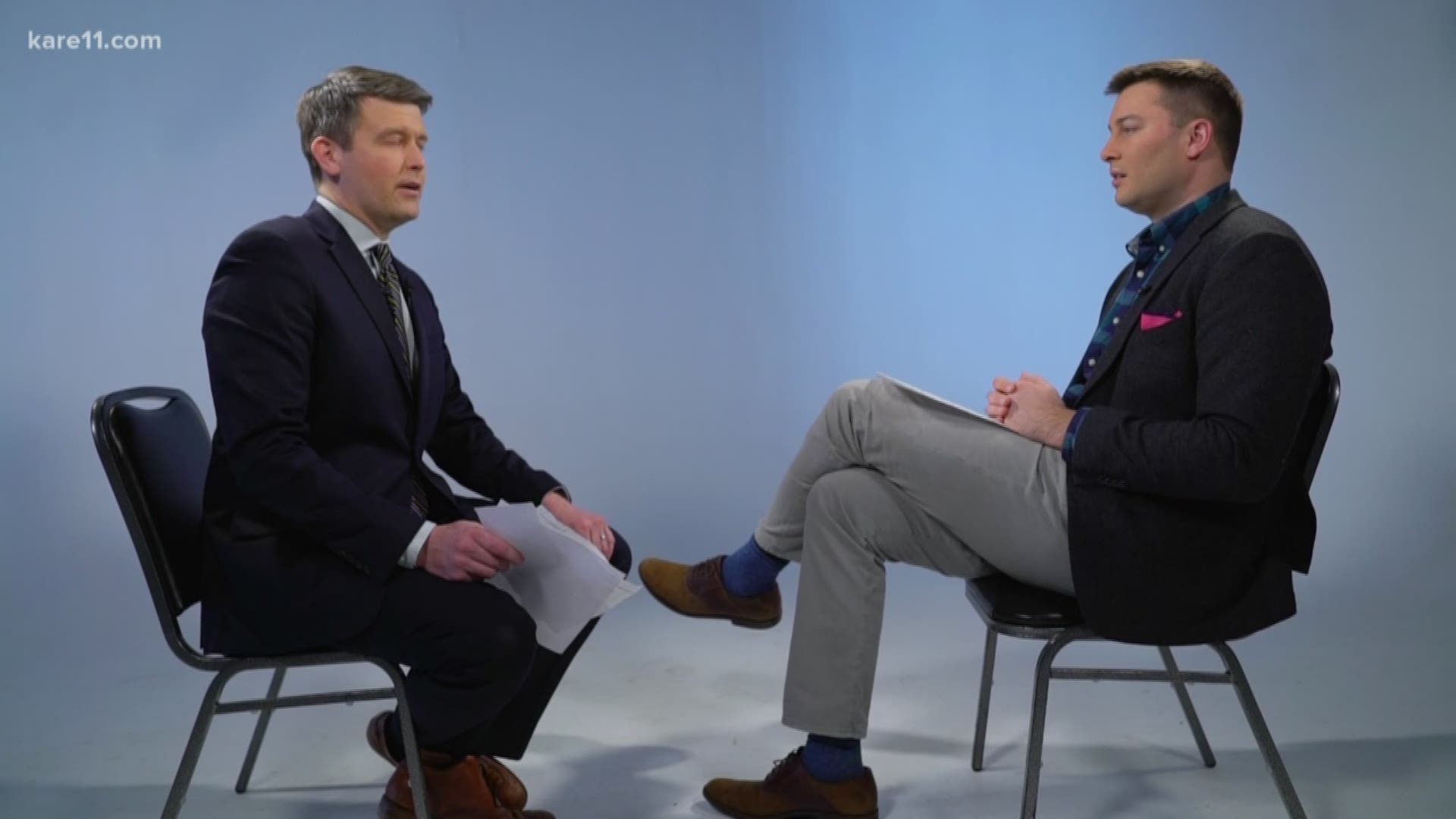 The letter received from the jail included answers to each question, with the numbers corresponding with Raguse’s questions.

KARE 11 reached out to Patterson’s attorneys, prosecutors, the Polk County Sheriff, the Barron County Sheriff and the Wisconsin Department of Justice to confirm that this letter did in fact come from Patterson

Barron County Sheriff Chris Fitzgerald said letters are only given to the inmates they are addressed to after they have been opened and read by jail staff. Outgoing correspondence is reviewed before it is mailed.

Fitzgerald said he was aware Patterson had sent a letter to Raguse. It was postmarked Feb. 28.

Wisconsin Department of Justice communications director Gillian Drummond said, “Inmates have a right to send mail, communicate that way. I don’t know I would have a reason to assume it is not (authentic).”

Patterson’s attorney Charles Glynn said he could not confirm or deny the letter. He said he heard about it but has not talked with Patterson directly.

Out of respect to the Closs family we notified Jennifer Smith, Jayme’s aunt and guardian. She let us know police already let her know about the letter. The family doesn’t want to talk on camera about it.

This transcript includes Raguse’s questions in bold and Patterson’s responses to each question.

Hi, IDK if I’ll actually send this. I’ll answer some of your questions, some I can’t(?) [PEN SCRIBBLE REDACTION] I won’t put a lot of details anyways.

1. I knew when I was caught (which I thought would happen a lot sooner) I wouldn’t fight anything. I tried to give them everything, [PEN SCRIBBLE REDACTION] (wasn’t completely honest) so they didn’t have to interview Jayme. They did anyways and hurt her more for no reason.

Question 2: What is your plan now? Plead guilty or take the case all the way to trial?

2. Plead guilty. I want Jayme and her relatives to know that. Don’t want them to worry about a trial. Was actually going to on the 6th, but in a case like this it’s not really allowed? So the judge moved it to the 27th of March.

Question 3: What led you to want to kidnap a girl in the first place?

Question 4: Do you have any remorse or regrets for the things that you did?

4. Huge amounts. [PEN SCRIBBLE REDACTION] I can’t believe I did this.

Question 5: What was your long-term plan if Jayme had not escaped that day?

5. Won’t say. [PEN SCRIBBLE REDACTION] It was really stupid though looking back.

Question 6: Did you confide in anyone or leave any hints that people failed to pick up on.

Question 7: Did your family really have no clue? How often were family members in your cabin, and how close did they come to discovering Jayme under the bed?

7. No one knew. My dad only came on Saturdays, the same time every day. So it was a routine. Jayme hides on Sat. [PEN SCRIBBLE REDACTION] My family respects privacy so no one even went in my room.

Question 8: Did you ever return to Barron after the crime or insert yourself in any of the vigils or anything being held in Jayme’s honor? Did you ever get close to her family following the shootings/kidnapping?

8. I stayed away from Barron.

Question 10: When in your life did you realize you were capable of doing something like this? I just watched a 20/20 Special on BTK killer, and he told a reporter he knew as a teen that he wanted to do something like this one day, and he was jealous over attention other killers like Ted Bundy were receiving. Did you feel any of those same thoughts?

10. The cops say I planned this thoroughly, and that I said that. They’re really good at twisting your words around, put them in different spots, straight up lie. Little mad about that. Trying to cover up their mistakes I guess. This was mostly on impulse. I don’t think like a serial killer.

Question 11: What goes through the mind of someone who wants to carry out something like this?

11. At the time I was really pissed. I didn’t “want” to. [PEN SCRIBBLE REDACTION] The reason I did this is complicated.

No one will believe or can even imagine how sorry I am for hurting Jayme this much. Can’t express it.

I’m Sorry Jayme! For everything. I know it doesn’t mean much.

Jake Patterson is accused of killing James and Denise Closs on Oct. 15 and kidnapping Jayme from their Barron home. Jayme escaped on Jan. 10.

Patterson’s arraignment is set for March 27 in Barron County.

Complaint: Patterson chose Jayme Closs at random after seeing her get on bus