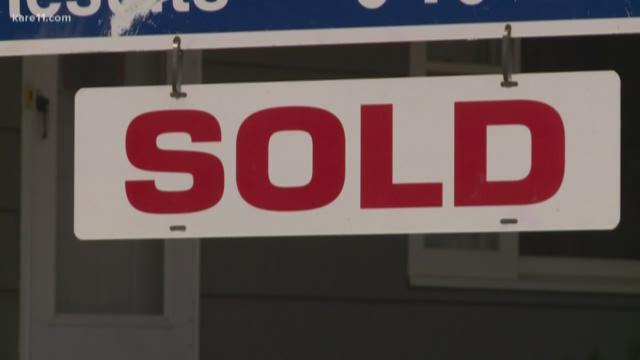 OAKDALE, Minn — When Edna Bart decided to sell her central Minnesota home to move to the Twin Cities, she thought the hardest part would be the actual move.

"Unpacking is a pain," Bart, who moved to be closer to her adult daughter, said.

The bigger pain, however, turned out to be trying to buy a new home in the metro. Bart sold her old home in just 24 hours.

"[Finding a home] under $300,000 is just really, really difficult to find," said Godzala, who helped Bart find her new home in Oakdale.

Bart's story is an example of how a tight Twin Cities housing market is leaving buyers struggling to find a home and pitting different generations of home buyers against each other.

Godzala says inventory is low, especially for homes under $300,000, because building hasn't gone back to pre-recession levels. He says not only aren't there enough homes, the ones out there typically aren't affordable.

The result: Both first-time home buyers and older buyers looking to downsize are seeking the homes in the biggest shortage.

"Those twenty-something home buyers... they're looking to get that two bed, two bath...maybe 1,800 square foot home, under $300,000," Godzala said, "They're trying to find that, and then you have Edna [Bart] with the larger home, the family's gone, and it's kind of funny, because it's almost like she's competing against her kids."

Bart jumped on the first home she saw in her price range. She put in an offer immediately and dropped the inspection to increase her odds of getting it.

"I never thought it would be that hard," she said.

Unfortunately for first-time buyers, when they compete against baby boomers, they usually lose.

That's because people downsizing, who have just sold their home, can typically put a lot more cash down in their offer.

Godzala has advice for anyone hoping to buy a home. He says you need to get your finances in order. If you're taking out a loan, get pre-approved.

He says if you see something you like, write a competitive offer as soon as possible.