Irwin Jacobs and his wife both died five months ago. 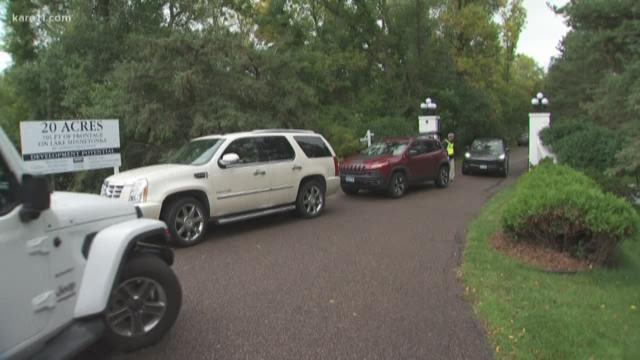 ORONO, Minn. — All throughout the morning, dozens of people have been going in and out of Irwin Jacobs' estate for the first day of the estate sale.

"I was just driving by right now and I was like oh my gosh, I gotta go in there," Andrew Iversen said. "I know Irwin Jacobs, not personally, but I've seen him around town."

RELATED: Minnesota businessman suspected of killing wife, then self

With car after car lining Shoreline Drive, the estate sale was hard to miss. From people wanting to peek inside to others looking for treasures, the sale had a wide variety of interests.

"It's a museum full of stuff in there," Iversen said. "I got a T. Boone Pickens book right here that was signed to Irwin Jacobs. T. Boone is a billionaire that just died yesterday and so it's got all his info in there and I was like, wow."

The macabre nature of an estate sale knowing that Jacobs killed his wife and himself five months ago are hard to ignore.

"I walked in there. I know the history of what happened," Iversen added. "Everybody does, I feel, in Minnesota. And I was like is this going to be an eerie feeling? One of the biggest things I noticed when I was in there was there's a sadness in that house."

For those who know, they say it's an honor to own a piece of 1700 Shoreline Dr. And for those who don't, ignorance is bliss.

As of Saturday, the estate sale has been postponed due to unforeseen family circumstances, according to H & B Gallery.