“I think Minnesota is going to be very different in the future." 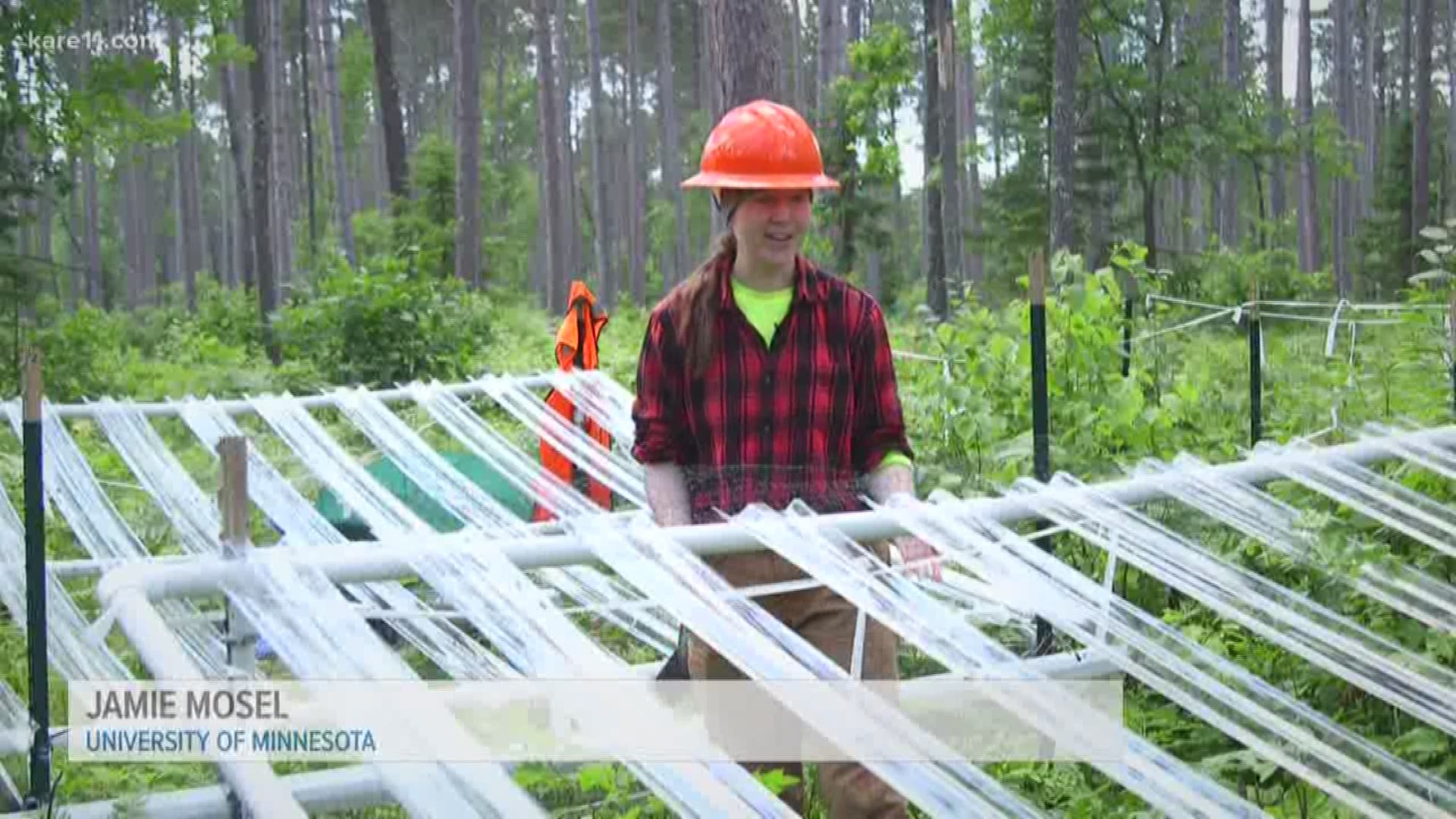 ITASCA COUNTY, Minn. — Deep in the Chippewa National Forest northwest of Grand Rapids and far from any visible trail, where pines are the iconic tree, researchers have built a lean-to of sorts to create, of all things, a mini-drought in the woods.

At a glance, the contraption’s roof looks a bit like a bunch of parallel toy car race tracks, which are made out of greenhouse material strips, with gaps in between.

“It’s supposed to divert about 50 percent of the precipitation,” said Jamie Mosel, research assistant, University of Minnesota, who works at the so-called 'rain-out shelter.'

If there is a race here in Minnesota’s north woods, it is against the climate, and the drought-making lean-to is one way researchers are trying to determine what trees will best tolerate a warmer, drier tomorrow.

“I think Minnesota is going to be very different in the future,” Mosel said.

“The projections are for increased frequency and severity of drought, and that’s the issue that we need trees that are adapted to those kinds of projected conditions,” said Brian Palik, lead investigator with the Northern Research Station of the U.S. Forest Service.

Palik oversees the Adaptive Silviculture for Climate Change experiment on some 500 acres of the north woods – the largest study of its kind in the country. Ultimately, Palik is seeking the best way to manage the current pine forests for the future.

”The idea is to maintain forest where there is forest here, and what that forest may look like in the future could potentially be quite different than what it looks like today,” Palik said.

As in most experiments, the ASCC study has a control – in this case, the dense woods as they exist today. Palik says the do-nothing plots would struggle in a drier tomorrow.

“Too much competition for moisture,” Palik said.

Beyond the control, the ASCC study includes three other approaches, ranging from thinning the woods to the most aggressive approach that is called “transition.”

In this portion of the experiment, non-native trees from southeastern Minnesota have been planted in the north woods, including bitternut hickory, black cherry and white oak.

“We’re showing through the performance of these tree seedlings that there has been climate change already that favors their habitat in this part of the world, whereas 20, 30 years ago, that wouldn’t have been the case,” Palik noted.

“Really what’s doing the best in the long term is hard to say yet; we haven’t determined that,” Palik said.

Not your grandparents’ forest

If warmer, drier weather is the future, Palik worries portions of the north woods could become prairielike. His goal – preserve some form of the woods.

“There is a sense of loss … ,” Palik said. “The forest of the future that we’re exploring here aren’t going to be your grandfather’s forest, but they’re likely to be your grandchildren’s forest.”