50 years ago Tom, Steve and Bill were young sailors aboard the USS Hornet, when they learned they'd be part of the historic Apollo 11 mission 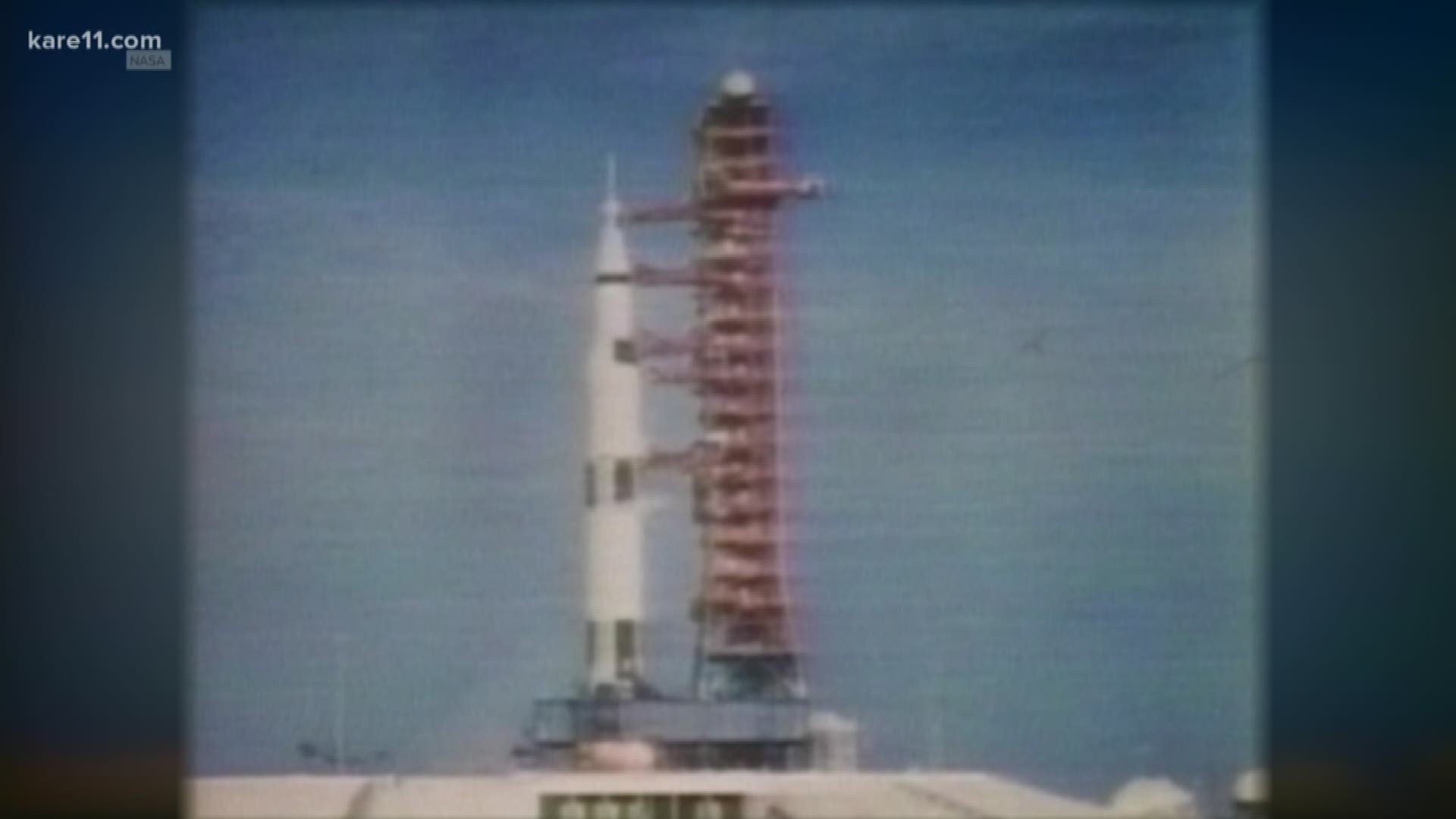 MINNEAPOLIS — It took technology and teamwork to put Americans on the moon back in July of 1969, in what was the culmination of a space race that had transfixed the nation for a decade.

It would also take some teamwork to get those history-making astronauts home safely. That's where the crew of the USS Hornet came into play.

"Word came out we were going to Hawaii and then to the South Pacific for recovery for Apollo," Tom Keyes of Andover recalled.

Keyes was a 19-year-old sailor aboard the Hornet that summer, when he learned the aircraft carrier would be diverted from Vietnam to serve as the recovery ship for the historic Apollo 11 mission.

"We'd been parking helicopters one foot apart for seven months in a row, so we figured we could handle one helicopter," Keyes explained, referencing the chopper that would fetch the astronauts from their life raft after splashdown.

Hornet shipmate Steve Culpepper of Jordan said most of the guys on the Hornet were just relieved to get away from the Gulf of Tonkin off the coast of Vietnam.

"When we got back to base the squadrons we had carried took off, and suddenly the ship was empty!" Culpepper remarked, brandishing a big smile.

"From that point it was no sweat, pretty cool."

The Apollo command module splashed down July 24 in the middle of the Pacific Ocean, some 12 miles from the Hornet. The ship closed the gap quickly, and in the meantime the big Sikorsky helicopter reached the capsule.

Navy UDT divers, now known as Seals, jumped into the water to install a flotation hoop to stabilize the capsule so the astronauts -- Neil Armstrong, Buzz Aldrin and Michael Collins -- could crawl into the life raft.

They chopper crew lifted them up to safety in cages one by one. By then, it was almost go time for Tom.

As an aircraft director it was Tom's job to make sure the chopper -- "Precious 66" -- got from the flight deck to the right hangar in the correct spot.

"I had to be careful not to bang it against the back bulkhead!" he recalled.

"We just had to get it in there without damaging it. And, you know, as a 19-year-old aircraft director in charge of stuff like this is hard to believe, but it's what we did."

One it was parked, it was time for the big reveal for the crowd that had gathered inside Hangar Number 3 on the Hornet.

Culpepper had spent many days before the Apollo crew's arrival making sure that the hangar floor shined for the dignitaries and national media expect to board the ship. Even the padeyes -- slots in the floor that aircraft are anchored to -- had to sparkle for the big day.

"This door slid open, and out they came. People were clapping, they were waving, it was perfect!"

The astronauts -- Armstrong, Aldrin and Collins -- emerged from the chopper wearing biological isolation garments, a.k.a. hazmat suits, and quickly made their way into a modified Airstream trailer where they'd spend 30 days in quarantine.

The worry was that they'd brought back some kind of exotic space germs that would spread to others.

"If there was such a thing we'd probably still be out there because they couldn't let us come back," Keyes quipped.

With the chopper properly parked and the astronauts in quarantine, Keyes grabbed his trusty Minolta 35mm camera and grabbed snapshots of history in the making.

He grabbed several shots of President Nixon and his entourage of Navy brass and NASA officials walking to greet the new heroes. The space travelers had to use a PA system to speak to the president, who was on the other side of the glass.

And when it was time for the traditional post-flight cake-cutting, the astronauts could only imagine how it must taste as they watched it through the glass.

"The head mess chief cooked them a big cake, which they couldn't eat!" Keyes said. "Here's your cake!"

The astronauts weren't the only precious cargo on the Hornet's to-do list. That command module still needed to be fished from the ocean.

That's where Bill Stiene of Lake City came into the picture. He was also a young aircraft director on the Hornet, but his job that day was operating the key elevator use to hoist the capsule into place.

"I was so excited I just couldn't put a word on it!" Stiene said, describing his emotions.

It's something Stiene had rehearsed several times before July 24, in all kinds of weather conditions and all times of the day and night. The Navy and NASA wanted Stiene, who went by the nickname "Teddy Bear" among his fellow sailors, to be ready.

"They picked me as elevator operator to do this, and I had to go through Secret Service clearance.  And I had Marines guarding my elevator every time I ran it."

Stiene said he had been more focused on Vietnam during his tours of duty. He didn't fully grasp the full significance of the recovery missions at the time.

"After Vietnam I kind of buried my memories of the war years, but then my daughters started telling me I was part of history."

Now he cherishes the memories and memorabilia and looks forward to an upcoming 50th reunion aboard the Hornet, which is now a museum docked in Alameda, California.

"It's amazing stuff, and I just enjoy it to this day that I was part of that."

Like most veterans, Tom Keyes and Steve Culpepper downplay the roles they played in Apollo 11.

"The work we did was pretty routine, but I was fortunate to have been a participant," Keyes said.

Culpepper said he was so focused on the war in southeast Asia at the time, he had no real concept at the time of how the entire world was obsessed with the moon landing. An Apollo 50th anniversary documentary gave him a different perspective.

"The big thing with us was Vietnam, but the entire world was focused on this event," he said.

"I really appreciate the fact I was able to see it because it provided me some background to an event I was right in the middle of then."

The three Minnesotans were all still aboard the Hornet in November of that year for the recovery mission for Apollo 12.