Historian's interest in Asian America sparked by her family's history

Dr. Erika Lee is one of the foremost historians on Asian Americans in the U.S. She said the Chinese Exclusion Act had a direct impact on her family. 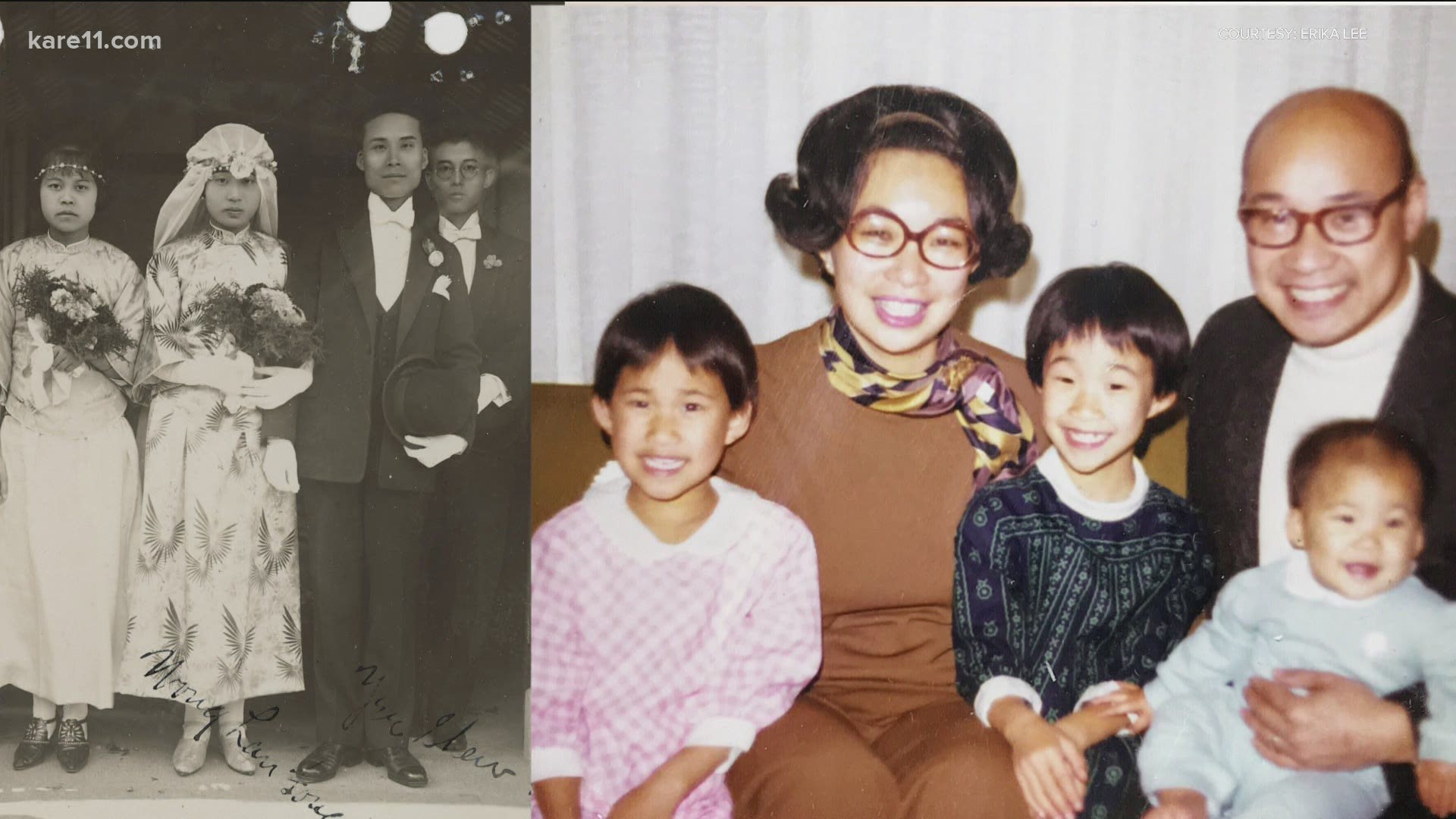 MINNEAPOLIS — She hadn't thought about becoming a professor. But now Dr. Erika Lee is one of the foremost scholars on Asian America history in the country and she calls the Twin Cities home.

The University of Minnesota Regents Professor of History and Asian American Studies is often sharing research to help others learn about the Asian American experience in the U.S.

Lee did that virtually during a historic congressional hearing on Anti-Asian racism in March, touching on the lengthy history of targeted attacks against Asian Americans and Pacific Islanders. Lee also does that as an author of four books including "America for Americans" and "The Making of Asian America."

Lee said her passion for history began with her own curiosity over her family history.

"I did not know their stories," Lee said. "I think for so many kids too, they’re not so much interested in asking about the past," she said. "I later learned that for many of the generation of Asian immigrants that my grandparents belonged to their journeys to the United States, their early years in the United States, were ones of trauma," she said. Lee said she began gently prodding her grandparents over meals or family gatherings.

Lee said depending on how you count from each the sides of her parent's families, she is either third generation or sixth generation in the U.S. Both Lee’s grandparents immigrated from China.

The first person from her family to arrive in the states sought the riches of gold.

"The first guy in our family to come actually came as part of the California gold rush, so in 1854," Lee said.

On the other coast, her grandparents opened a Chinese restaurant in Brooklyn. A couple of generations later, Lee was born in Syracuse.

Lee's parents moved to California's Bay Area later where she was raised. She said she grew up close to historic Chinatown in San Francisco.  She returned to the east coast to go to college where she would experience a pivotal moment in her life.

"I remember almost the exact day when I was sitting in a classroom as a college student and the professor was talking about this thing called the Chinese Exclusion Act," Lee said. "I think if you had taken a picture, my jaw would’ve dropped because I had never heard of these things," she said. She said she was surprised, angry, and frustrated that such an important part of her own family history and the country's history hadn't been taught.

"The Chinese Exclusion Act was the first federal immigration law to single out an immigrant group for exclusion based on race and then we went on to do that many, many other times," Lee said.

It was intricately woven with her family history. Lee said one grandmother on her mother’s side was left behind by her grandparents who came to the United States and brought a male cousin instead.

"One of the things that Asian exclusion did was it created a scarcity of immigration, not everyone could come," Lee said. "My great-grandparents, for whatever reason, decided that the chance, the opportunity to come to the United States was perhaps better given to a male rather than to their own daughter, and so that was just traumatic for her," Lee said.

By the time Lee graduated, she had figured out that studying Asian American history in the U.S. was what she wanted to do.

"It was important, not just for filling in the gaps of American history, but also as a form of anti-racist work," Lee said. "Luckily for me was hired here at the University of Minnesota right out of grad school and I have been here ever since," she said.

Lee talks about a particular way of thinking of Asian America as west or east coast phenomenon. That is, until she got to Minnesota.

"One of the things I so appreciated about coming here was to have my students, to learn from my students about the multiple ways in which Asian America is formed," Lee said. "I have now taught multiple generations of Hmong American University of Minnesota undergrads all from the same family, I also have been privileged to help scholars who are Korean adoptees research their communities and write about their communities to publish pathbreaking books," she said. Lee adds that these diverse communities hadn’t been represented in scholarship, literature, our popular culture until recently. "It allowed me to see and appreciate a much wider diverse richer Asian America then I think I would have been able to learn about appreciate learn from had I just stayed in California," she said.

Ever the historian, she uses history as a way to teach her children about part of their identity. She said she tries hard to make sure the books they read reflect a diversity of Asian American or Black characters.  She also keeps history around in their every day life.

"We’ve got the photographs, we have we have the menu from my grandparents Chinese restaurant in Brooklyn up in our kitchen," Lee said. "We look at it every day," she said.

There’s a push to teach Asian American history in schools. Lee said that should happen, and happen early in K through 12. She said the country shouldn't be waiting until college to teach students about the history.

"It can’t just be the 'when we have time' or 'if we have time' in the quarter that we’ll add on this extra thing about a group because then it becomes tangential," Lee said. "It has to be fully integrated in whatever subject we’re talking about," she said.

Lee said frankly, she thinks there has never been a more important time to bring history into the conversation not just for what’s happening within the Asian American community, but the Black community as well.

"Our understanding of how race works in the United States has to be understood through our long history of institutionalizing racism and discrimination," she said.

Lee also said these conversations need to happen beyond schools.