Kirsten Freiborg had been having symptoms for a few years. But doctors never tested her for colon cancer. 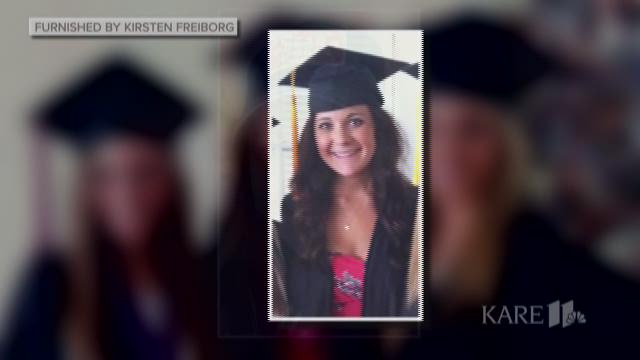 While efforts to screen people over age 50 seem to be working, colon cancer is on the rise among younger Americans.

One Minnesota woman learned that she had stage 3 colon cancer at age 22 after being misdiagnosed. Now, she's sharing her story to raise awareness.

Just weeks before her college graduation, Kirsten Freiborg had her whole life ahead of her.

But unexpectedly, she was diagnosed with colon cancer.

Doctors found the stage 3 colon cancer in the form of a tumor while performing a colonoscopy.

She'd been having symptoms for a few years.  But doctors had never tested her for colon cancer.

"They kept saying it was internal hemorrhoids and to not worry about it," Freiborg said. "That I was too young for anything...so I was misdiagnosed for about two years."

Suddenly, instead of starting her adult life – she was fighting for it.

"I finished finals while I was in the hospital, and then was able to graduate on time with my degree," Freiborg said. "Then, I started intensive chemotherapy right after."

Freiborg is one of a growing number of young adults facing colon cancer.

It's now the third-leading cause of cancer death in young adults, and misdiagnosis can lead to delayed treatment

"No one even thought about doing a colonoscopy just to see what was going on," Freiborg said. "So looking back, it's really frustrating because it worries me how many people now have gone misdiagnosed and continue to get misdiagnosed."

So, she's raising awareness by sharing her story. Freiborg even appeared on a billboard in Times Square and lobbied in Washington DC.

She's urging people to be aware of the symptoms of colon cancer no matter their age.

"I think the main thing is to trust your body and if something feels wrong to keep going back until you really have an answer for your symptoms." Freiborg said.

Today, Freiborg has a house, a dog and a dream job.  All because she got tested and treated in time.

"I feel very lucky to have caught it when I did," Freiborg said. "I feel like I sort of have this whole second chance at life."

Some key symptoms of colon cancer are blood in your stool, anemia, unexplained weight loss and persistent cramps or low back pain.

Be sure to ask your doctor about colon cancer.