May 14 is Hmong American Day in Minnesota. An integral tradition of that culture is “paj ntaub” or needlework. 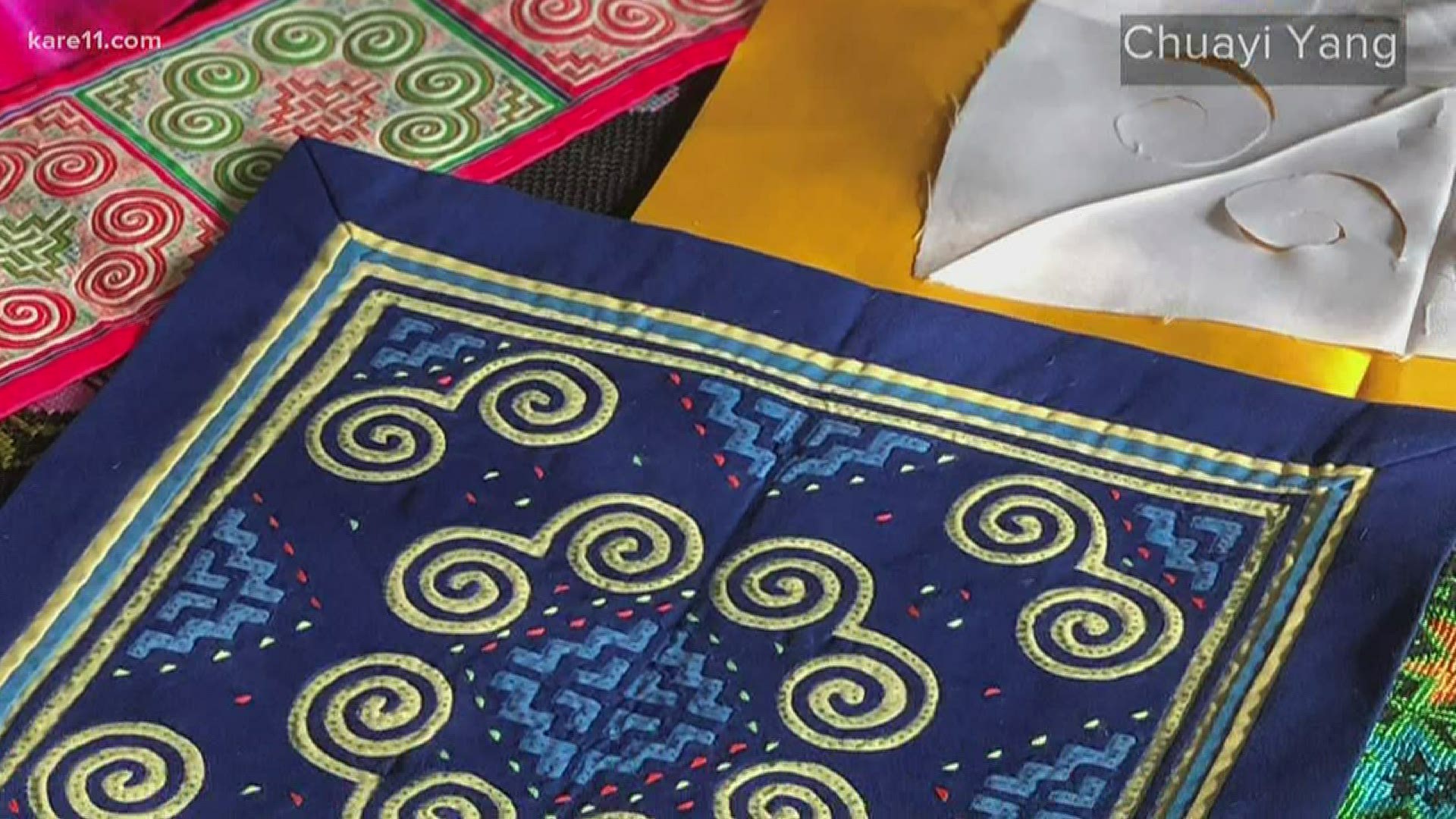 ST PAUL, Minn. — May 14 is Hmong American Day in Minnesota. But this year, it looks different because of the COVID-19 pandemic. It’s usually a day to celebrate and share with others the rich culture.

An integral tradition of that culture is “paj ntaub” or needlework.

Suzanne Thao is an instructor with of Project Paj Ntaub at the Hmong Museum in Saint Paul. She said the art is in danger of disappearing.

Thao interviewed with KARE11 through Zoom. She said her first introduction to the art was through her grandmother. Today, she is working on a special piece inspired by a piece she made in a refugee camp. She holds up the cloth and there are shades of blues, yellows, reds and greens.

“They are mixed and match with really no pattern,” Thao said.

While it might appear there’s no sense of direction with the cloth, the story behind it, is clear.

“Best, best friend,” Thao said. She said she made this with her best friend in a refugee camp. The thread was collected from scraps or whatever strangers could spare.

It’s often said that the Hmong story is woven into this type of sewing called paj ntaub.

Chuayi Yang is Suzanne’s daughter and also works with the Hmong Museum.

Except, it’s an art people are doing less and less of.

“You see a lot of Hmong clothing that is not made, they’re printed, they’re machine made,” Yang said. “They’re not made through hands and the stitches that we’ve learned through generations,” she said.

“We don’t have books and papers for you to read at the library at our age when it comes to this,” Suzanna said. “So when my mind fades, so will this skill with it and that’s what worries me enough to bring tears to my eyes,” Thao said.

That’s partly why Thao decided to teach paj ntaub at the museum.

“It’s a place where these traditions will be held for safekeeping, from disappearing,” Thao said.

Yang said there’s no other classes like this in the Twin Cities. She said they were trying to make learning the skill intentional so they created classes in hopes that people would show up. She said it’s not about learning how to make a full blown Hmong outfit, as it is just knowing how to do this art even for something like a patch on a backpack.

“This is an art that’s been carried through many, many years and generations and through a lot of wars and struggles but it still survived,” Yang said. “I think that’s speaks to the spirit of Hmong people being warriors and carriers of this history and I think it’s really important for us to remember that,” she said.

Thao doesn’t forget. She’s helping others to do the same.

“Life is busy, but if you learn how to sew you’ll know this skill forever that’ll color your life in ways you didn’t know,” Thao said.

The Hmong Museum has cancelled all live programs for the summer because of COVID-19. It is trying to take Project Paj Ntaub classes virtual.

The Hmong Museum became a non-profit in 2015. It offers educational programming in collaboration with artists and community members. Most programs are aimed at preserving Hmong history and experiences and sharing those resources through educational programming and social media. Hmong Museum is funded through donations, grants, and gift items for sale. If you want to give, visit the website.

Hmong American Day was proclaimed by Governor Mark Dayton in 2013. May 14 was chosen because it was the last day of airlift evacuations of officers and their families from the covert headquarters in Laos to a refugee camp in Thailand.

RELATED: With a little help, a vulnerable community stays connected

RELATED: Surgeon and seamstress team up to sew masks