Soobleej Kaub Hawj was killed in late June. Now a man named Zurg Xiong is on hunger strike to protest the shooting and alleged injustices in Siskiyou County. 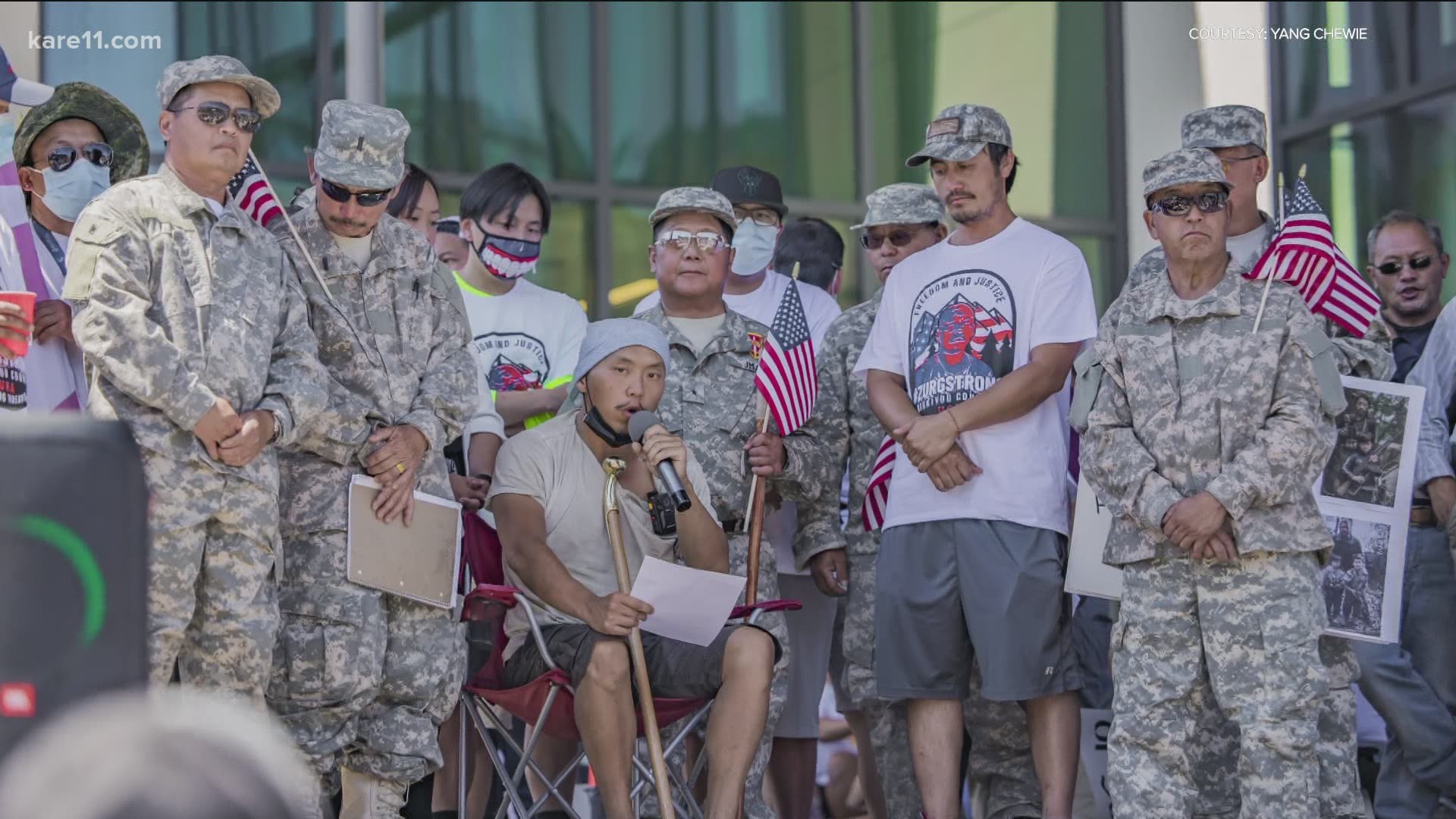 SISKIYOU COUNTY, Calif. — The recent killing of a man by law enforcement almost 2,000 miles away in California has prompted another man to go on a hunger strike for more than two weeks now. Those events have galvanized some people from Minnesota's Hmong community and more to travel to the California and Oregon border to bring attention to what they're calling the injustices happening in Siskiyou County.

Zurg Xiong, 33, says he had no other choice but to go on a hunger strike.

"My health physically is deteriorating," he said.  Zurg Xiong has been on his hunger strike for 17 days now on the steps of the courthouse in Yreka.

"I'm giving a voice because we've been denied a voice," Zurg Xiong said. "Because we are the ones who speak the truth.  We lost a brother," Xiong told viewers through a Facebook video in the first days of his strike.

A man was shot and killed by four officers from different agencies, including the Siskiyou County Sheriff's Office on June 28th. One witness told a newspaper he heard around 60 shots. The Siskiyou County Sheriff's Office said 35-year-old Soobleej Kaub Hawj (Shong Leng Kao Her) from Kansas City, Kansas was in his truck near evacuation zones during Lava Fire. The sheriff's office said Hawj attempted to drive back into an evacuation zone after repeated directions not to. The office said Hawj pointed a gun at officers and that's when they fired.

But those claims are being refuted by Zurg Xiong and hundreds of supporters who attended a Saturday rally at the steps of the courthouse in support of Hawj and justice in the investigation into his death.

That group of supporters include Minnesota-based activists like Tony Parrish and Tou Ger Xiong, who travelled to Siskiyou County for the rally.

"He was in his car running from a wildfire with his wife and three kids behind him so why did he end up dead?" Tou Ger Xiong said.

"Some of these people I grew up with in St. Paul who moved down there and said, 'Hey Tou Ger, we need your help,'" he said. Tou Ger Xiong said the Hmong community who live in Siskiyou County are from the Midwest, including Minnesota and Wisconsin. "So these are our cousins who still keep in touch."

According to Zurg Xiong, Hawj's death was a culmination of escalation by the county over allegations of racial discrimination and marijuana grows. He said the sheriff's office began aggressively enforcing ordinances to prohibit water trucks from delivering to a specific grow sites in neighborhoods primarily populated by Hmong people. Those were ordinances put in place by the Siskiyou County Board of Supervisors.

Sheriff Jeremiah LaRue said most of these grows are illegal. He also disputes the group's claims of racism. LaRue met with Zurg Xiong Sunday after the rally, saying water became an issue with the influx of people moving to the area over time. LaRue said it comes down to what's lawful and what's not.

"It's really about us all equally complying with the law," LaRue said.

But Zurg Xiong said it's those exact laws he and the county are enforcing that are targeting the Hmong community there.

"We just want everybody to abide by the laws but we also want them to make fair laws," Zurg Xiong said.

The water issue is a part of the larger issue for Zurg Xiong and his supporters. They have a list of demands including releasing any body worn camera or dash camera from Hawj's shooting incident and a third party investigation. They have demanded a different agency investigate, suggesting the California Attorney General or federal agencies like the Federal Bureau of Investigations, or the FBI. Zurg Xiong said until then, he is holding steadfast in his hunger strike.

"Once I get the confirmation that they're coming and they're taking over the investigation, then I'll end the hunger strike," a tired and weakened Zurg said in another Facebook video.

The investigation is still being handled by the Siskiyou County District Attorney's office. District Attorney Kirk Andrus is adamant, there is no reason to hand this investigation over to a different agency. KARE 11 talked to him over the phone Wednesday, and asked about Zurg Xiong's hunger strike. Andrus said he didn't know who he was but that he "had heard" there was a hunger strike going on in the community.

"The fact that he chooses to go without food, will not have us call the FBI," Andrus said. “My investigators are very diligently and with complete integrity looking into these officers’ actions. There’s nothing about that, that is going to be covered up or slanted.” He added he doesn't see the racism allegations protestors are claiming, but says they are entitled to their opinions.

"What they’re also entitled to is a D.A. who doesn’t pay attention to race and that’s what they have here,” Andrus said. “The fact that this individual was shot is extremely unfortunate."

When asked about the relationship between the Siskiyou County Sheriff’s Office and the his office, Andrus said “They do their job and then send us cases and we do ours."

Andrus said while it's important the investigation is done quickly, this can't be rushed. He said there are “dozens” of witnesses his investigators are interviewing, he believes they have around five interviews scheduled Thursday.

Andrus said he believes there is footage of the shooting but he’s not sure which officers or vehicles it comes from. He said he's sure his investigators have collected every piece of video involved with this shooting, and he will assess if he will release that to the public when the investigation is completed and a determination of charges is final.

When asked about the pubic records requests from different media outlets in the area and state, he said those requests may or may not be successful.

LaRue is asking for patience as the investigation continues.

"I hope that you and other people will come to a pace to see the truth and understand the steps that investigators took," LaRue said. "I just ask for obviously time of reasonableness."

St. Paul City Councilmembers Nelsie Yang and Dai Thao have also weighed in on what is happening in Siskiyou County. In a statement released last Thursday, both stand with Zurg Xiong and his supporters. They're calling for a federal investigation into the sheriff’s office for racial discrimination toward the Hmong community there, as well as the release of any footage of the shooting, and rescinding the water limit ordinance.

Another issue brought up by protestors is the release of Hawj's family dog, Silk. They say Silk was in the truck with Hawj when he was shot. But it's unclear why the dog has not been released to the family or if the dog is still alive.

Supporters of Zurg Xiong have started a petition seeking justice for the Hmong Americans in Siskiyou County. You can find that here.