It's no drive-thru town! Lindstrom offers charm, lakes, and a bakery with Minnesota's best donut

Our That’s So Minnesota Road Trip series takes us about 50 minutes northeast of the Twin Cities to Lindstrom. 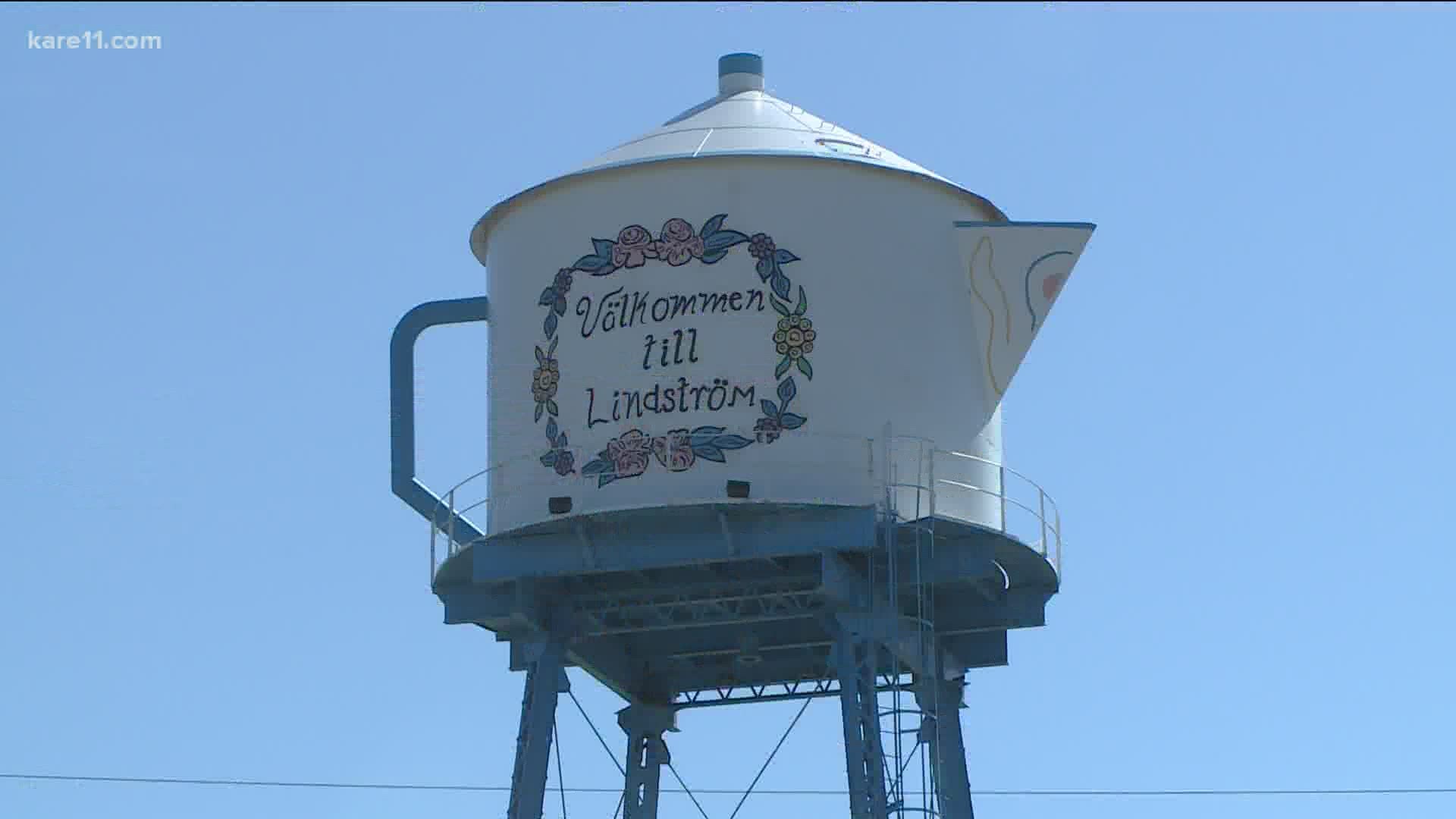 LINDSTROM, Minn. — The next stop on our That’s So Minnesota Road Trip series takes us about 50 minutes northeast of the Twin Cities to a place that might be as Swedish as it gets: Lindstrom.

You might have passed through on the town Highway 8, but choose to stop in Lindstrom and you'll find it has a lot to offer.

Author Vilhelm Moberg came to the area and wrote the novel "The Emigrants" in the 1950's. His fictional heroes Karl Oskar and Kristina Nilsson stand at the west end of town as a tribute to the Swedish Immigrants who settled there.

"We very much celebrate the fact that we have that Swedish heritage but we don't want to do it in kind of a kitsch way," Malchow said. "We want to do it in a way that makes people intrigued about that Scandinavian heritage."

That Scandinavian heritage intrigue inspired Moberg to find a farmhouse in the area and relocate it to Lindstrom. It's now known as the Karl Oskar House and worth a stop to check out.

"I think the other thing that gets a little overlooked is the fact that we were settled early on by Native Americans, and a lot of our names of our parks for festivals are immortalized and recognize that piece of our culture as well," Malchow said.

Lindstrom is a part of the Chisago Lakes Area, so there are plenty of connected lakes to enjoy.

You can wander in and out of shops when you're not on the water and grab a bite to eat at one of the local restaurants.

But definitely pop in to Lindstrom Bakery.

Bernetta Coulombe is the owner. "Bernie," as regular customers call her, has been the owner for 48 years. The bakery claims the title home of the Scandinavian donut! So what is it?

Bernie's donuts are so tasty Food and Wine magazine recently crowned it Minnesota's best donut! By the way, she also has something called "Cinnamon Crisp," which is a kind of Scandinavian rusks. It's so popular she typically sells out.

"It just boggles my mind," Bernie said. "The good lord has blessed me, unbelievable," she said.

A short drive away, rural Lindstrom opens up to Panola Valley Gardens. Husband and wife Gary and Mary Ann Norton are the caretakers and mad creators of the eight acres where all types of flowers grace the landscape.

"That's a big job," Gary Norton said. "Of course we mow every week it takes a day to do that."

"It evolves because you put the pavilion up, but then you got to landscape it, well then we started doing lunches and teas so we added a kitchen onto that," Mary Ann Norton said. "I think I'm crazy!" she said.

But crazy makes for beautiful wedding ceremonies, and now their booming luncheons and afternoon tea in the garden. The buildings in the gardens, were all built by Gary.

"Mom and I, particularly in the spring when we're getting started, we look at the infrastructure that's here and we wonder how we ever did it?" Gary Norton said.

Check out these 11 others things to do in Lindstrom:

One piece of the Chisago Lakes Water Trail. It also offers a sub-zero winter hike.

It is located in downtown Lindstrom and is a resource for anyone seeking historical or ancestral information.

Glader cemetery is the oldest Lutheran cemetery in Chisago County and was affiliated with the Chisago Lake Lutheran Church.

This old farmhouse was relocated to Lindstrom when author Vilhelm Moberg saw it and was inspired to use it as the house for his fictional characters Karl Oskar and Kristina. He wrote the first of his Emigrants series in 1954 and it’s a fictional account of Swedish immigration to Chisago County and, ultimately, Lindstrom.

One of the features is Lindstrom Band Shell which hosts the annual summer concert series, “Harmony in the Park”.

Food and Wine voted in the winter that Lindstrom Bakery has the best donut in Minnesota!

Northwoods Roasterie is the home town coffee shop. The company said it strives to bring coffee as close to it's origin as possible.

The organization dedicated to tourism in the Chisago Lakes area. Lindstrom is a vital part of the collective community, but there’s are more cities with things to do outside of town

These were created by artist Ian Dudley to commemorate Lindstrom's founding fathers.

It is located just south of town. It is a garden oasis for wedding ceremonies and also for garden tea.