Booth launched Good Karma Animal Rescue in her own home and has since saved 1,000 dogs. 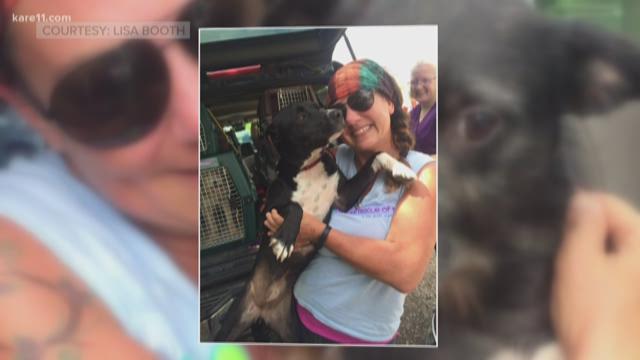 BLAINE, Minn. — Lisa Booth decided to give up the stability of a corporate job to help find homes for our four-legged friends.

"It was just something that sparked inside me that instantly I knew this was where I belonged," Booth said. "I knew this was the work I needed to do."

Booth launched Good Karma Animal Rescue six years ago. The first four and a half years the rescue was open, she ran it out of her home and a storage unit.

Good Karma is now based out of an office inside Northtown Mall in Blaine.

"My purpose is bigger than me," Booth said.

Good Karma is a foster home-based rescue that saves dogs from high-kill shelters and other high-risk situations. Since the rescue began, Booth said they've saved 1,000 dogs.

Good Karma has even traveled to places like Houston after Hurricane Harvey and Louisiana after flooding.

"Dogs are just so pure and they’re so in the moment and they’re so easy to shed their baggage," Booth said. "They don’t know what’s going to happen tomorrow. They’re just right now."

Booth said they are currently looking for people interested in fostering dogs.

You can learn more about volunteering on their website.

More from Women Crushing it Wednesday: