The founder of Spoonful Apparel talks about her mission to sell product with a positive message to help curb childhood hunger. 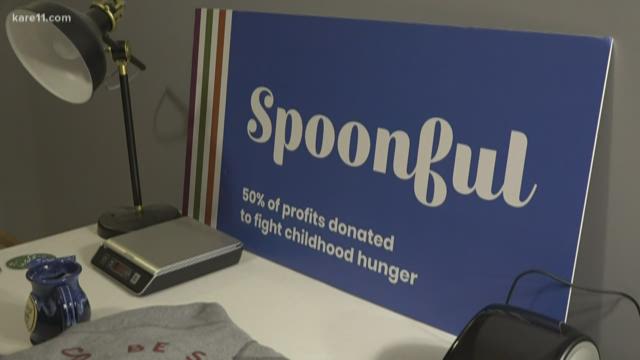 MAPLE GROVE, Minn. — This isn't exactly where Susan Elwer expected to be.

"I never in my wildest dreams would have thought I would start a company," she says.

And yet - here she is - running Spoonful Apparel, which creates apparel with positive messages on it and then donates 50% of their profits to organizations working to fight child hunger in the United States.

"Hunger isn’t something that you can necessarily see but it’s prevalent in every community," she says.

Why does Susan feel so passionate about child hunger? She says an experience she had in 2016 as an assistant in a preschool classroom played a role in it. "Found out in November of that year that one of our students had gone the first half of the year without a school lunch and it broke my heart," she says. "It brought back memories of my own childhood. I grew up on welfare, single parent family - so I could relate to what he was going through."

In August of 2017 she launched Spoonful Apparel.

Today they sell a number of products, including t-shirts, sweatshirts, mugs, socks, stickers and hats. The business is run out of her basement in Maple Grove.

You can buy Spoonful Apparel on their website and also check out their pop up shop December 19-22 at the Shops at Arbor Lakes in Maple Grove.

OTHER NEWS: Survey says MN is most charitable state in U.S.