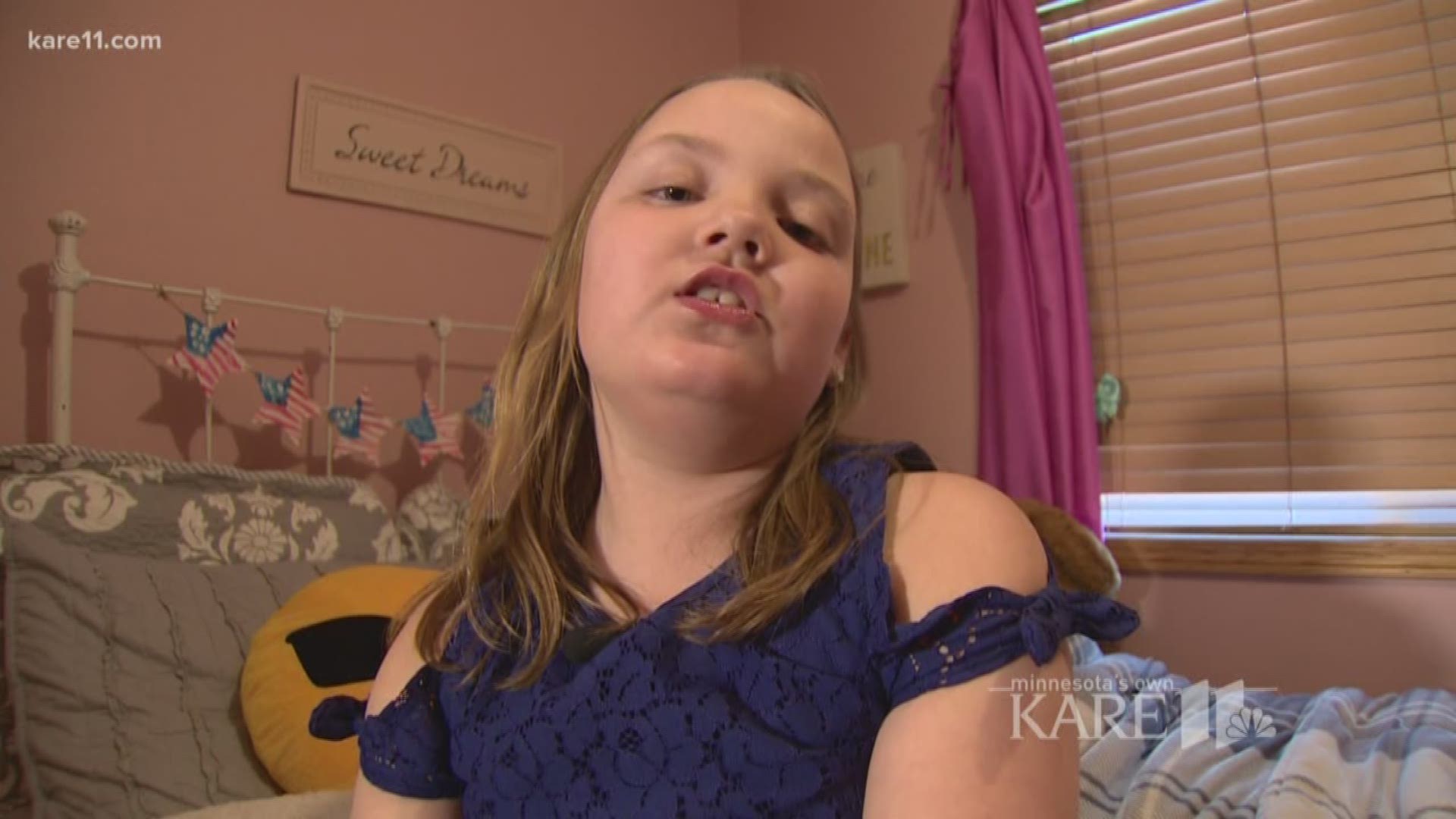 MONTICELLO, Minn. – Give Ruby Minder credit for gumption. The self-described shy 10-year-old sent a letter to KARE TV that netted Ruby her own Land of 10,000 Stories segment.

“I alway’s wanted to be an actor, but I could never figer how,” Ruby revealed in her handwritten letter. “I think I could become famas if you guy’s at kare 11 help out.”

A few days later Ruby sat on her bed, mustered her courage, and stared down the lens of a KARE 11 news camera as she sang her way through several verses of “Scars to your Beautiful,” the pop song she’d been practicing.

“She wanted to stay home today to practice, she wanted to be ready,” Ruby’s mother, Dana Minder, said.

Ruby wrote the letter on her own, then asked her mother to mail it, but not read it.

“Before I slipped it into that slot at the post office, I thought, 'Man, I really should look,'” Dana said. But not wanting to violate her daughter’s trust, Ruby’s mother resisted the temptation.

Within a few days, Dana received a voicemail from KARE 11. Still clueless over the contents of the letter, she decided to talk to Ruby before returning the call.

“‘You would not believe who called me today and left me a message,’” Dana told her daughter.

Ruby’s surprise quickly turned to excitement. “She's like, ‘Oh this is great news. It worked!’” her mother said.

In her letter to KARE 11, Ruby wrote that she had told her parents of her plans to be an actor and singer. “They said it was hard and I told them I could do it,” Ruby wrote. She continued, “I want to be on you segment the land of 10,000 Story’s.”

Dana Minder is not surprised by her daughter’s determination. “She has a very clear idea of what she wants to do,” Dana said.

Seated on her bed, Ruby shared her goals with KARE 11.

“I think about the future a lot,” the 10-year-old said. “In my piggy bank I save money for college when I'm older.”

Ruby said she’s already studying hard. “I think about doing good grades in high school so I get into a good college.”

In college, Ruby plans to study music and acting.

She’s already studying every move of her favorite singer and actor, Dove Cameron from the Disney Channel.

Ruby points to a small desk in the corner of her bedroom occupied by her collection of Eifel Tower models. “If I become an actor I'm going to save a bunch of money and fly me, mommy and daddy to Paris,” she said.

Dana Minder tears up, thinking about her daughter’s big dreams and the long odds she faces to reach them.

“My biggest fear would be she would get her heart broken and that drive that she has would go away,” Dana said. “I don’t want to see that happen.”

Yet Ruby’s mom said she can’t help but be impressed by her she daughter’s resolve – the determination it took to send the letter and the courage it took to sing into that big camera.