More than 450 people were killed, many of them burned to death in their cars as they tried to outrun the racing wildfire. 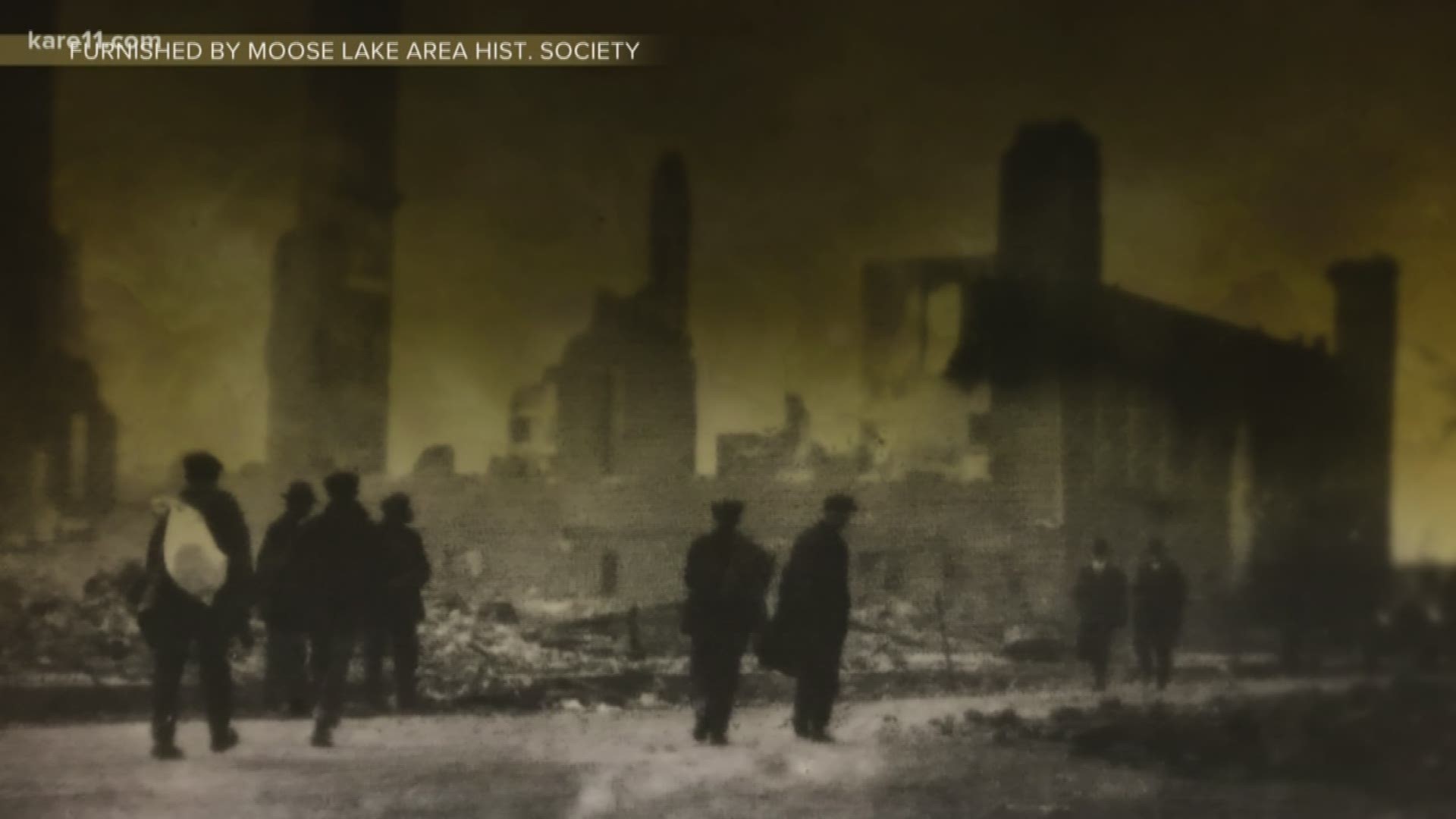 MOOSE LAKE, Minn. – It's not a place one enters easily. Yet, it's not the required stooping or uneven footing that can easily turn back a visitor. It's shaking what happened 100 years ago this week within this dark, musty root cellar.

On Oct. 12, 1918, as a massive wildfire descended on their farm, members of the Soderberg family - adults and children - huddled within the root cellar’s field-stone-lined walls.

Fourteen Soderbergs went in. None came out alive.

“They decided they were going to survive in the root cellar,” local historian Dan Reed said as he stood near the cellar’s opening. “And, of course, they made the wrong choice.”

The Soderbergs were among more than 450 people who perished on Oct. 12, 1918, in the deadliest natural disaster in Minnesota history.

Not a single fire, but several – likely started by embers from passing trains – were whipped up by fierce winds and desert-like humidity as northeastern Minnesota was enduring its worst drought in half a century. It was, in other words, the perfect storm.

More than 450 people were killed, many of them burned to death in their cars as they tried to outrun the racing wildfire.

In contrast, the Soderbergs’ choice seemed sensible. Together, the family entered the root cellar to wait out the fire, seemingly protected by stone walls and several feet of surrounding soil.

“Three generations,” Lois Johnson says of the Soderbergs. “Plus, a sister-in-law that was visiting."

As a reporter for the local paper, Johnson has written many times over the years about the fire. But her connection to the Soderbergs feels more personal. She lives just a few hundred feet from the old Soderberg farm and passes the root cellar daily.

Johnson imagines the fear that must have gripped parents and children as the fire quickly transitioned from black smoke in the distance, to bearing down on the family farm.

“Where do you go and what do you do? They hadn’t thought about that,” Johnson says.

Several other families made the same mistake, by crawling into root cellars and abandoned wells.

As the fire passed, it sucked from the Soderberg’s root cellar the oxygen family had been breathing.

“It makes it real,” she says of the root cellar. “Some people won’t go in there because of what it’s connected with.

It’s been some time, but Johnson has paid a few visits. She’s imagined “what it must have been like for the searchers to come and find these people sitting there sleeping - and they're gone. They're not living anymore.”

Kettle River, Cloquet and Moose Lake were among the towns all but burned to the ground.

Most of Cloquet’s population packed into box cars, escaping by train ahead of the fire.

Hundreds of Moose Lake townspeople survived by fleeing into Moosehead Lake – some driving their cars into the chilly water.

The Soderbergs were laid to rest in a mass grave - dug by hand - days after the mayor of Moose Lake had telegraphed an urgent plea to the governor for 300 caskets.

“The old ones always said, if the fire decided to kill you, it would. If it wanted to let you go, that's what it did. You had no choice over it,” Reed said.

A clump of trees surrounding the root cellar is all that remains of the Soderberg place.

A sacred spot - where the story is remembered.