Since launching his company last December, the Pillager High School junior has signed up 75 customers, each paying him $10 a month to haul away their discarded recyclables once a week. 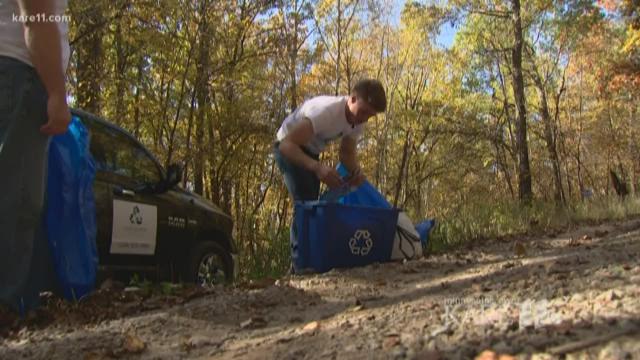 PILLAGER, Minn. – The owner of the first curbside recycling company in Pillager works his route on Sunday afternoons.

It’s not that Noah Brogle wouldn’t rather do his pick-ups on weekdays. He can’t. He’s in high school.

Since launching his company last December, the Pillager High School junior has signed up 75 customers, each paying him $10 a month to haul away their discarded recyclables once a week.

“We moved to the area about a year ago and the one thing we were surprised by was the lack of recycling,” says Mike Morgan, one of Noah’s customers. “So, when he came, I thought it was a great opportunity and a great idea.”

If homeowners are surprised to find a 16-year-old at their doorstep selling recycling services, those people closest to Noah are not.

Both at home and at school Noah has gained a reputation for being a recycling fanatic.

“He wants to do big things; he wants to make a difference in the world,” says Angie Brogle, Noah’s mom.

Greg Bennett, Noah’s junior high baseball coach, laughs as he recounts his first experience with Noah as one of his players.

“We were at an away game, one of the first of the season. I'm getting ready to get on the bus and I turn around and Noah's digging through the garbage,” says Bennett.

Puzzled, the coach queried his young player. “And he goes, ‘Hey, coach, somebody's got to recycle.’”

Noah carried the contents of the trash can onto the bus and recycled it when he returned to Pillager.

“Happened every game after,” adds Bennett.

Later, as a football player, Noah got the attention of his coaches when he brought his own plate, silverware and cup to a team cookout to avoid using disposable dinnerware.

Chris Berent, a teacher at Pillager High School, is one of Noah Brugle&#39;s recycling customers&nbsp;

“I just think he cares about the earth,” says Chris Berent, one of Noah’s teachers.

“We were disappointed when he quit,” says Jason Brogle, Noah’s father, before noting that now "his coach is one of his customers.”

Jason and Angie Brogle are used to their son&#39;s passion for the environment

Noah and his father built the trailer they pull behind a pickup on Noah’s route. They drop off the recyclables they gather at one of Cass County’s 29 collection sites.

The notion of curbside recycling has been challenging for the county and its local governments.

“Cass County is 2,500 square miles. You just don’t have the density of customers to provide curbside recycling,” Fairbanks says.

Noah covers about 100 miles during his route, collecting recyclables in the communities of Pillager, East Gull Lake, Sylvan Township and Fairview Township.

The young entrepreneur named his company One Earth Recycling, because, in Noah’s words, “We really do only have one earth.”

1 / 10
16-year-old Noah Brogle has started his own curbside recycling company&nbsp;