Mike Mathiason says his students are more confident learners on days they dress up. 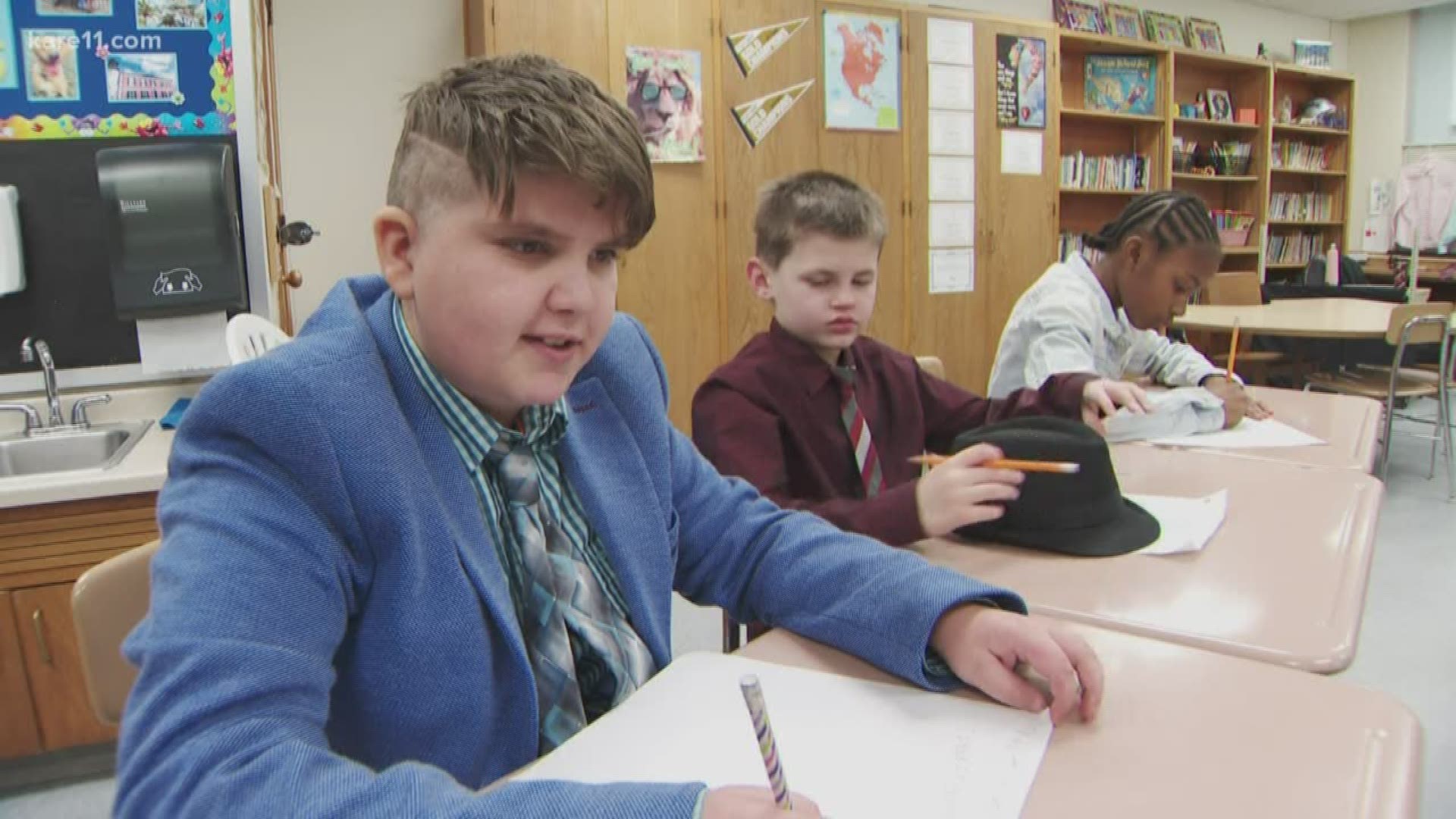 ST. CLOUD, Minn. — Jermaine McClure stands in the back of his 4th grade classroom, carefully looping into a knot the plaid tie wrapped around his neck.

To hear the 9-year-old talk, the too-long tie may as well be a superman cape.

“When I wear it, I feel better and I feel like I can get better at math,” Jermaine says.

Such talk is music to the ears of Jermaine’s teacher.

“When we look good, we perform better,” Mike Mathiason will tell his students that very morning. “When we have self-confidence, nothing stops us.”

Each Tuesday morning, Mathiason’s students at Lincoln Elementary in St. Cloud drop their backpacks and boots and transform into business attire.

“It’s going to be an awesome day,” Nimo Dabar says as Mathiason holds up a mirror to the 10-year-old sporting a tan blazer.

Nearby, Riyaq Mohamed sports a blazer too. “Makes me feel special,” she says proudly.

“Dress for Success” Tuesdays are new to the school this year, but the roots were put down early in Mr. Mathiason's teaching career when he adopted suits and ties as his wardrobe of choice.

“I always thought that we're in a professional job and we should dress up.  I guess you could say I feel like I'm on my A game,” the eighth-year teacher says.

Mr. Mathiason sensed that the jacket and tie made him walk a little taller – commanding more respect.

Now, along the wall of windows in his classroom, dress shirts, jackets and blazers are draped on hangers, ready to be claimed by students.  Ties are laid out on a bookshelf.

Some of the clothing was donated, but much of it was purchased by Mathiason.

“I went out and I bought them dress shirts,” he says. “I also take them home after every Tuesday and I wash them at my house.”

Mr. Mathiason says he’s noticed a positive change in the learning environment on days his students dress for business.

“I really changed their mindset when they're walking in the hallway,” he cites as one example. “They're quiet and they're following the expectations because they feel good. They're holding themselves to a little bit higher expectations because of how they look,” he says.

So, no surprise Muhsin Hussein has also asked to wear ties on other days of the week.

He likes the way they make him feel. “Respected,” Muhsin says.

Someday, Muhsin wants to be a teacher. “When I become a teacher,” he says, “I'm going to get shirts and ties just like Mr. Mathiason.”

The students of Mr. Mathiason’s 4th grade class are facing the future well-suited.

Note: Mike Mathiason could use some additional children's dress shirts, sport coats and blazers for his class. If you would like help please email:  michael.mathiason@isd742.org

MORE LAND: MN teen sleeps 18 months outside in a hammock