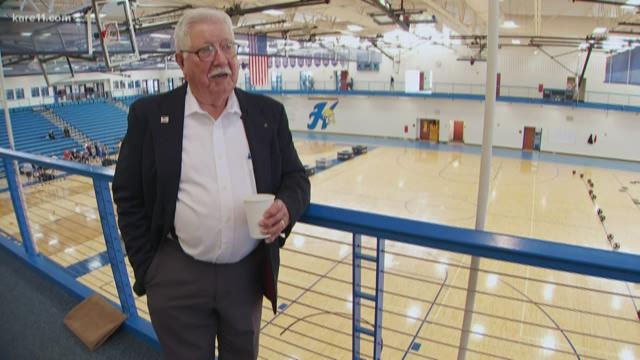 HASTINGS, Minn. — When Hastings school officials welcomed the public to exercise on an elevated track in the high school gym, they’d hoped to avoid clashes between students and senior citizens.

An 88-year-old Air Force veteran formed a friendship with a group of ninth grade boys.

“They talk about him like he is their grandpa,” Jeff Corkish, the boys’ physical education teacher said.

It all started last year as Loren Mollet said hello to the boys as he circled the track on his daily walks.

The boys were bunched up near the locker room, awaiting the bell that would send them to their next class.

One of the ninth graders, Nathan LaCroix, said a friendly “Hey” in response – while noticing “KOREA” in bold letters on the veteran’s cap.

“Then the next time I came around he stuck out his hand and thanked me for my service,” Mottet said. “I thought, there's the nicest boy I've ever met.”

Mollet circled the track again.  More hands went out.  More boys from the class thanked Loren for his service.

The friendly greetings continued each time Mollet came to walk on the track.

“Then they started calling me by my name,” Mollet said. "After about two weeks of this, I told my wife, ‘I’d like to do something for those guys.’ I said, ‘I’m going to stop at Walmart and pick up some Snickers.’”

Smiles abounded when Mollet walked into the high school weight room with candy bars for the class.

“That was the best Snickers I've ever had,” Conner Larson, one of last year’s ninth graders, said with a smile.

Grateful, LaCroix decided to get Loren a thank you card.

“We spent the next week-and-a-half getting signatures from everyone,” LaCroix said.

By then, Mollet had taken his walking outdoors for the spring and summer.

LaCroix held onto the card for months, till the veteran returned to the track in the boys’ 10th grade year.

Mollet could barely believe his eyes when he opened the envelope to find the card signed by the entire class.

Larson said he could immediately tell the card meant a lot to Mollet, “because just the look on his face was priceless.”

When the boys’ phys-ed teacher suggested they put their feelings toward Loren into letters, nearly the entire class complied.

“I wish you were my grandpa,” wrote another.

Corkish got emotional talking about it, pausing to collect himself. “You hear so much bad about kids all the time,” the teacher said as he continued. “You just have that deep breath, like, these guys are awesome.”

With the ball back in Mollet’s court, he asked Corkish if he could take the boys to lunch.

Instead, they agreed to a gathering at the school.  Mollet invited several other veterans from Hastings American Legion Post 47.

The veterans introduced themselves to the boys, who sat and listened respectfully.

Mollet continued.  “One of you said, ‘I wish you were my grandpa.’ I’ll tell you, if you need a grandpa, you’ve got one,” Mollet assured the boys.

The gathering ended with more handshakes and thank yous – from the boys to the veterans and the veterans to the boys.

Hastings High School principal Mike Johnson watched from along the wall, a few feet away.

“So many times we just need to get out of the students' way,” he said. “Today they're the teachers teaching us what it means to be connected.”

MORE LAND: Man with autism stunned when community buys him a new bike