After 5 decades in prison, inmate is embraced by small town

The Wisconsin parole agent had never come upon another inmate like Danny Amos – and soon he would be heading to her town. 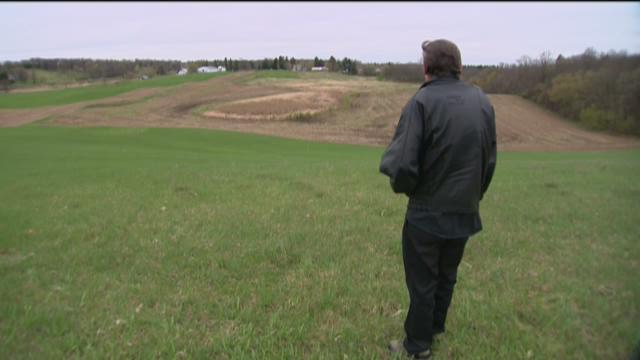 BALSAM LAKE, Wis. – Nichole Strom read through the six-inch-thick file with a sense of both amazement and dread.

The Wisconsin parole agent had never come upon another inmate like Danny Amos – and soon he would be heading to her town.

“He’s one in a million,” she would later say.

Auto theft, armed robbery, intent to kill – the list of crimes was pages long. But even more jarring was when the string of offenses started.

Amos had just turned 11 when he was sentenced for the first time. All but six months since, he’d either been on the run or behind bars.

Danny Amos was 10 years old (left) when he first ran afoul of the law. &nbsp;He was released from prison last year at 64.&nbsp;

“When he got in the transport van he didn’t know how to buckle a seatbelt,” said Strom. It was her first indication of how much the world had passed Danny Amos by.

Amos’ father was in prison when he first ran afoul of the law himself. At the age of 10, and growing up in Kansas City, Amos stole a bike and shoplifted a candy bar.

His mother told a judge she didn’t want him anymore. She surrendered her parental rights and Amos was sent to a juvenile facility.

“I was locked down in solitary confinement for 13 years,” Amos said. “I've been in at least 34 prisons.”

Strom was waiting for him when he was released in August with the clothes on his back and a check for $3.70.

“He hadn't talked to his family. He had no support network,” Strom said.

Danny is now a member at Alliance Church of the Valley, where he&rsquo;s greeted by hugs and handshakes - and volunteers his time on church projects. (Credit: Chad Nelson, KARE 11)

Convinced that Amos had next to no chance of remaining free without strong guidance, Strom sought help from her church.

“The thing that caught my attention was how lost he was coming back into society,” said Rev. Gary Russell, pastor of Alliance Church of the Valley.

Take Amos’ first trip to Walmart. “It was overwhelming,” said Amos, whose panic attack started when the store’s electronic doors opened in front of him.

“That shocked me that you walked up to them and they opened up like that,” he said.

“I didn't even know how to use a can opener,” said Amos.

Amos spent his first six months of freedom in a homeless shelter converted from the old county jail.

“These used to be the cells,” Amos pointed out during a tour of the shelter.

He would know. “Yeah, I escaped from this jail,” Amos laughed.

Among the witnesses to the fleeing inmate three decades ago was Dorene Hendrickson. “He had handcuffs on and was just a truckin'," said the retired courthouse worker who today is renting a home to Amos. “I said, ‘Was that you?’”

With the help of community donations, Amos has been fixing up and furnishing the home, which had been vacant for years.

“It’s all given to me,” Amos said of the community's help.

Amos’ driving lessons were a gift too, from Dana Frank. “Some of the biggest pleasure I got out of it was just watching Danny's face,” said Frank, an Alliance Church member who has been serving as a mentor to Amos.

“He'd drive up and down the yard smiling like a kid,” said Frank. “There was an innocence, you know, there was a true innocence,”

Innocence is not a word ever before applied to Amos.

Frank taught Amos to fish. Frank's wife Wendy has been teaching him to cook.

But sometimes Amos simply drives with his Chihuahua "Freedom" to a hill overlooking the farm and reflects.

“C'mon out here and just stand and look at the beauty – the freedom,” said Amos, looking over the open spaces.

Danny Amos volunteers at a community dinner at Alliance Church of the Valley in St. Croix Falls, Wisconsin&nbsp;

Danny is now a member at Alliance Church of the Valley, where he’s greeted by hugs and handshakes - and volunteers his time on church projects.

“I'm blessed to have him in my life and I know a lot of people are,” said Hendrickson.

Strom, who’s been watching the transformation, said she’s certain that without the support of the community Amos would “be back behind bars.”

For his part, Amos says there’s no going back. “I know where I want to be and I ain’t letting nobody down."

The boy nobody wanted is becoming the man no one ever thought he could be.

NOTE: Danny Amos hopes to help other inmates with their transitions back into society. Click here to learn more about his crowd funding campaign.