Bus company owner goes above and beyond for his students

Every school day, rain or shine, Jon Held can be found in his familiar red cap, warmly welcoming students. 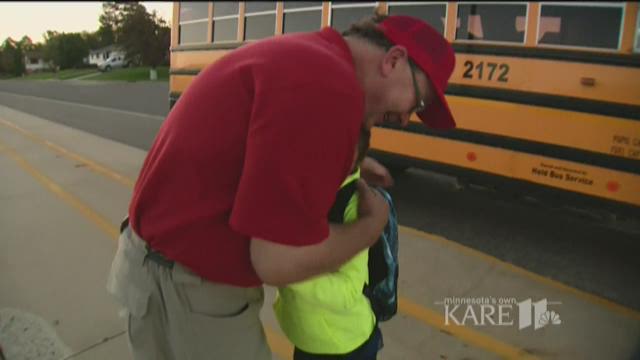 KENYON, Minn. – The contract between the Kenyon-Wanamingo School District and its bus company says nothing about daily hugs and pats on the back.

The owner of Held Bus Service throws those in free of charge.

“My little slugger Luke is here,” exclaims Jon Held before wrapping an arm around an elementary school student departing one of Jon’s buses.

The sidewalk hugs and high-fives are repeated over and over as students arrive.

“I really enjoy giving,” Jon says. “People take enough in their life, but it’s so much more fun to give.”

Every school day, rain or shine, Jon can be found in his familiar red cap, warmly welcoming students.

At the end of the day, he’ll be back on the sidewalk sending the same children on their way.

“He’s always out here greeting the kids and they chase him down,” says parent Connie Ugland. “They just love him, and he loves them.”

A sign of that affection can be found atop the heads of many of the children. After a student asked for Jon’s red cap, the bus company owner did one better. On the last day of school this past spring, Jon delivered 140 caps, one for every member of the first and second grades.

The purchase set him back more than $1000 – money well spent, according to Jon.

“This one little boy with glasses takes his cap, grabs me, and says ‘I love you Jon,’” says the bus company owner, still moved by the response to his gift.

Parents like Amanda Starkson are grateful. “He doesn’t have to do this,” she says. “He only has to supply the buses and make sure the kids get to school safe. It melts, my heart, it just really melts my heart.”

The giving didn’t start with the caps. Jon buys candy in bulk to hand out to his kids as they board their buses on Friday afternoons.

Elementary school principal Katy Schuerman says Jon is the first to step up if funds are needed, for everything from backpacks to yearbooks.

“He finds out who might not have a merry Christmas and purchases gifts for those kids,” says the principal. “I have never been in a place where I have seen such hands on involvement from a bus owner.”

Jon and his wife have one daughter, but envisioned a larger family. A series of miscarriages changed their plans, the last a son who was to have been named Jackson.

"A lot of people think that’s why I have this connection now with kids,” he says.

Jon isn’t sure if daily interactions with children are filling a void, only that his life couldn’t possibly be fuller.

“I want to take care of them and I want the families to know that their kids are always going to be safe, because I’m going to always be watching them,” Jon says.