The sword will be returned to Japanese descendants. 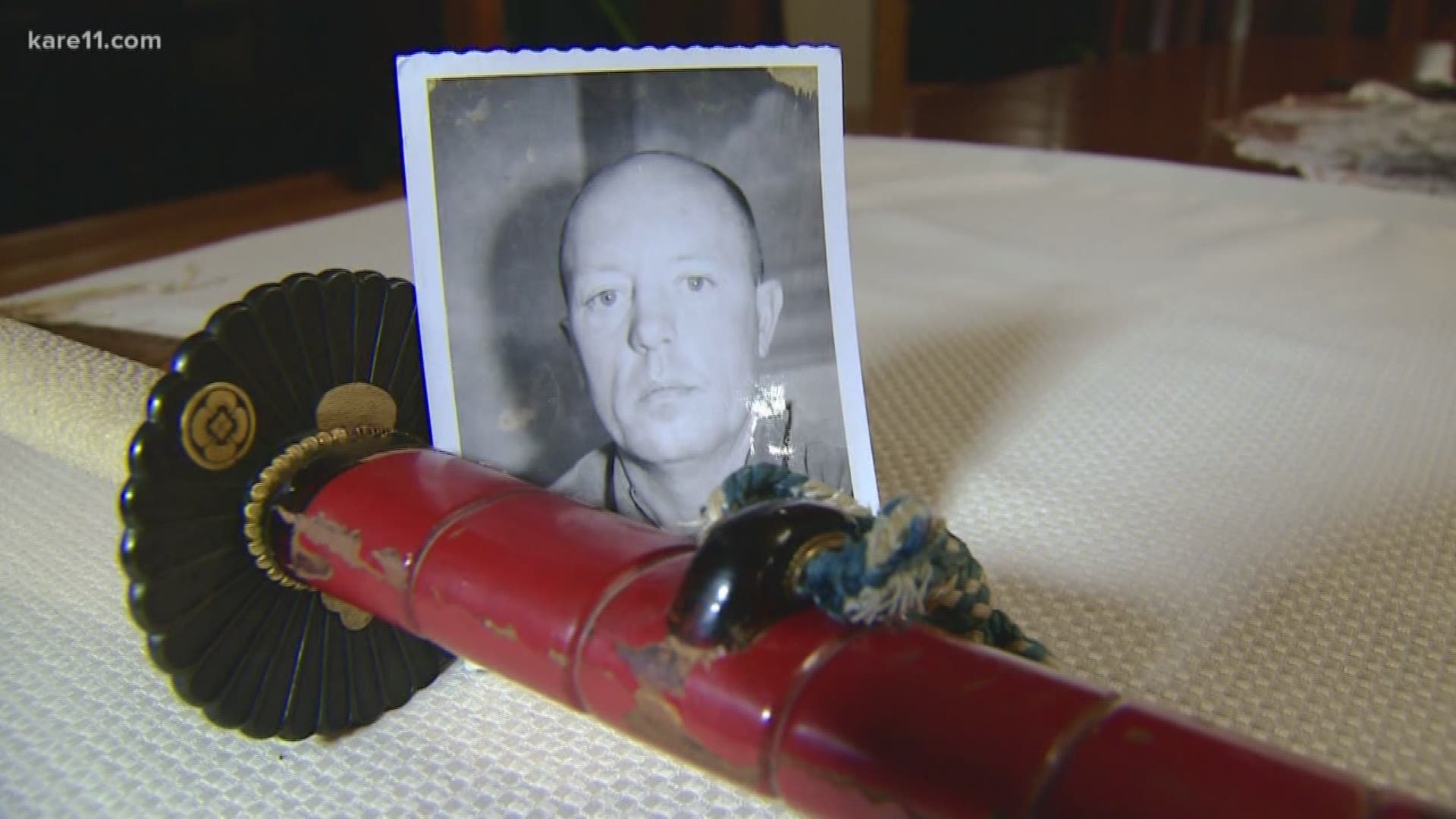 Credit: Boyd Huppert, KARE
The sword that spent years in a Minnesota basement, recently identified as a Japanese samurai sword between 400 and 500 years old.

LE CENTER, Minn. — For decades the sword gathered dust among the canned goods in a Minnesota basement.

The residents of the home didn't know what they had.

Turns out the sword once belonged to a Japanese samurai, likely between 400 and 500 years ago.

“We didn’t have any idea,” Jeff Traxler, the sword’s current owner, said. Traxler glanced toward his son, Sam. “Not until he did the work on it.”

Later this month, Sam Traxler and his girlfriend Allie Trnka will fly to Japan to return the sword to the decedents of its original owner.

“I think it’s time for it to go back,” Sam Traxler said.

Some details are still missing from the story of sword’s migration to Minnesota, but this is known: Colin Fowler, a WWII veteran, brought the sword home as a souvenir when he completed his service in Asia.

Jeff Fowler, Colin’s son, said his dad didn’t talk much about the war – and never revealed how he’d acquired the sword.

He may have picked it up on a battlefield, but there are other possibilities.

At war’s end, American troops confiscated and destroyed Japanese swords by the thousands. Some of those swords were plucked from piles and spared destruction by souvenir-seeking soldiers who brought them home to American in their duffel bags.

However he acquired it, Collin Fowler didn’t treat the sword as anything special.

Jeff Fowler remembers the sword sitting on a basement shelf. He also recalls his father’s admonishment to leave it alone, for fear his son might cut himself.

“It just kind of laid there and nobody really cared about it,” Jeff Fowler said.

After his father died in 1995, Fowler placed the sword with some other items he planned to discard.

“It almost ended up in the burn pit,” Fowler said.

Instead Fowler offered the sword to his friend Jeff Traxler.

“He brought it out and showed it to me and said, ‘You can have it,’” Traxler said. “I said, ‘I've got to do something for you.’ So, I dug a septic system with a backhoe for him.”

For the next 20 years the sword hung on Traxler’s wall, till Traxler’s son Sam, an Army veteran with an interest in martial arts, became curious about the sword’s engraved Japanese characters.

“He’s nosy about this kind of stuff,” Sam’s dad said. “He sees something and is like, ‘What is this all about?’ I’m like, ‘Go ahead and see what you can find.’”

Sam Traxler posted pictures of the sword’s engraved characters on a Reddit page, asking for translation help. He soon realized the sword was not the WWII-issued weapon that his family had assumed.

Yano Takashi, a Japanese man with a passion for history, offered Sam Traxler the initial Reddit translation, after which he became engrossed in the follow-up research.

The engraved characters in the sword’s handle were those of a specific blacksmith shop. Takashi also identified, written in Japanese on the wooden tag, a family name and address. Elsewhere on the sword, Takashi identified the family’s crest.

Takashi then located decedents of the sword’s original owner – to whom Sam Traxler and his girlfriend will deliver the sword later this month.

Credit: Boyd Huppert, KARE
Japanese characters that helped identify the samurai sword which will be returned to Japan.

Having learned of sword’s true origins, the Traxlers quickly ruled out keeping the sword or selling it.

“It just means too much,” Sam Traxler said. “In Japan the sword has the soul of the person who carried it.”

The Traxlers have not had the sword appraised. Its monetary worth doesn’t matter to them.

Takashi raised the money to pay for Sam and Allie’s trip to Japan. He says interest is high in the transfer.

“Sam and Allie are going to be TV stars in Japan,” Takashi said.

After receiving the sword, the descendants of the original owner plan to donate the sword to a museum for public display, according to Takashi.

Jeff Fowler said his father would approve. “He had a tremendous respect for the Japanese people. He’d probably want to take it back himself.”