Checking in with Liana & Gracie, still bonded by act of cross country kindness 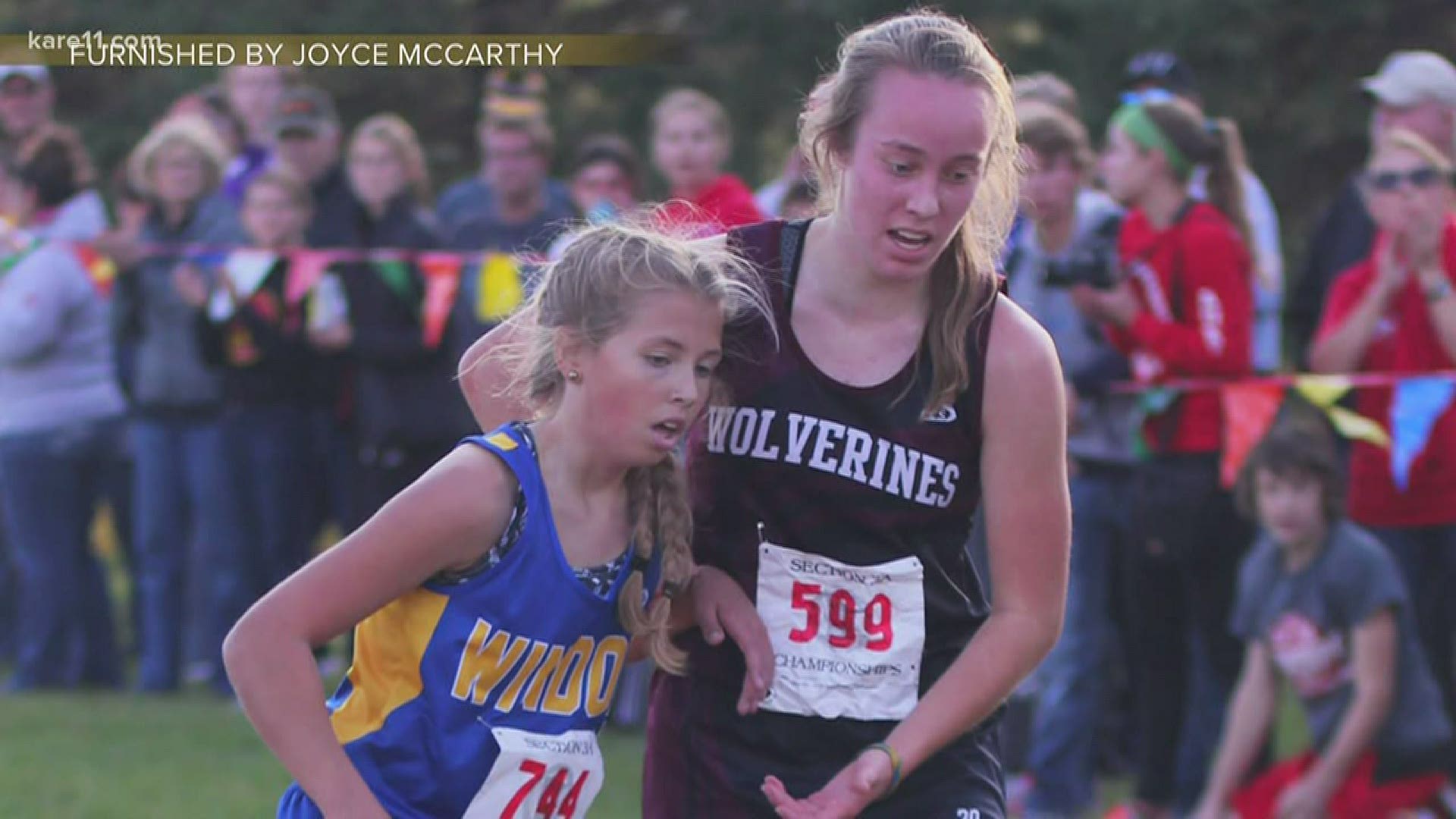 MOUNTAIN LAKE, Minn. — During this time of "stay at home" we are reconnecting each week with old friends from Boyd Huppert's Land of 10,000 Stories.

This week we are “checking in” with Liana Blomgren and Gracie Bucher.

Liana and Gracie were first featured in Land of 10,000 Stories in November of 2016. Gracie, a Windom 8th grader, collapsed near the finish line of a sectional high school cross country meet. As other runners passed, Liana - a rival senior from Mountain Lake - scooped up Gracie and helped her across the finish line.

As a result of her kind act, Liana was disqualified from her final high school race. Their story was shared widely shared and broadcast on NBC Nightly News. 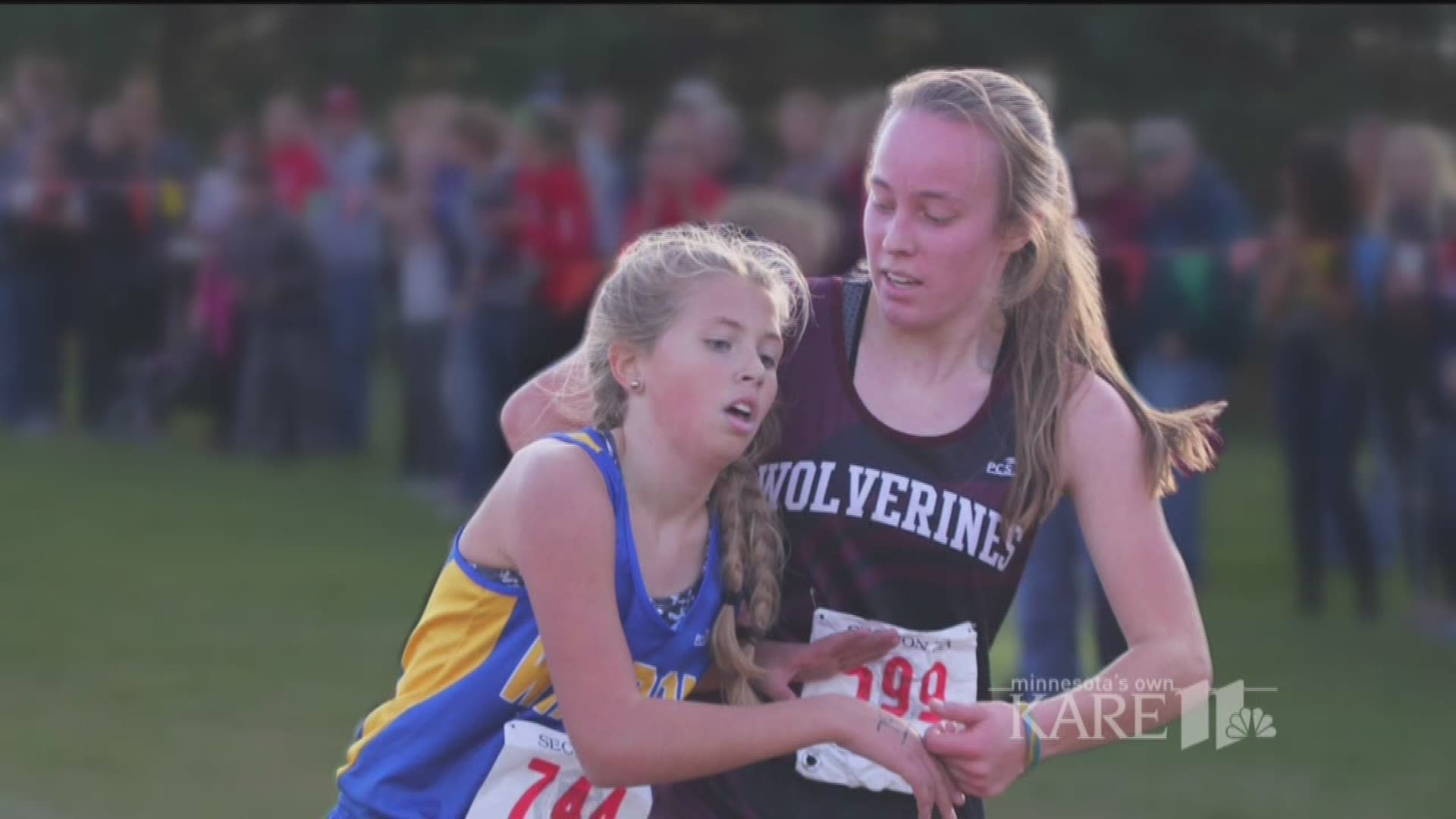 RELATED: Runners reunite at state after collapse during race two years ago

Boyd spoke this past week via video chat with Liana and Gracie:

BOYD: Hi Gracie and Liana, so good to see you both!

GRACIE & LIANA: (In unison) Good to see you too!

BOYD: Where are you now in school?

LIANA: I’m a junior in college now at the College of St. Scholastica.

BOYD: What have you been up to?

LIANA: Prior to this whole COVID outbreak I was in track and cross country and choir in college.

GRACIE: Track season of course, so I was looking forward to doing some tougher training stuff.

BOYD: are the two of you still in contact?

LIANA: We have a Snapchat streak that started the winter after this whole story aired.

GRACIE: Our streak is over a thousand days now.

LIANA: And then every once in a while, we get the chance to meet up in person again and we usually go grab a bite to eat or something like that.

GRACIE: Since she’s in college she knows a lot more than I do, so I’ve been starting my search for where I want to run in college, and I can consult with her about some things. It’s been really cool.

BOYD: What was the aftermath of that story airing?

LIANA: I just remember being very overwhelmed by the amount of people that saw it.

GRACIE: I saw it all over the internet, and like ESPN, and they did an article in Women’s Day magazine. I even got a call from Ellen.

LIANA: I remember one letter was addressed to ‘Cross Country Runner, Mountain Lake, MN’ and it ended up in my locker. I also got a whole packet of letters from a 5th grade class in Florida.

GRACIE: I got a (gift) box from Dairy Queen because of the gift card I gave Liana. (In the previous KARE story, Gracie presented Liana with a DQ gift card, because Liana had been disqualified.)

GRACIE: And this past fall I did as well.

BOYD: Liana, when you heard that Gracie had made state, no way you were going to miss that?

LIANA: Absolutely, I was going to be there, because when we had met for the first time, she was trying to make it to state, and just the fact that she could complete that, it was really neat.  I had a little Koala bear, and, on the bear, there was a little tag that said ‘Congrats on Koalafying for state’ because she originally hit me with that DQ pun, so I decided I needed to give her a pun back.

BOYD: The rules have now been changed, correct?

LIANA: Yeah, so, in our scenario, I wouldn’t be disqualified, but Gracie still would be.

BOYD: Good change in the rules?

LIANA: Definitely, looking back everything that’s happened since then and everything positive in my life that’s come about just because of this, I definitely wouldn’t trade any of it.

GRACIE: Same for me.

BOYD: Thank you. It’s been so nice seeing you both.

LIANA: It’s been good seeing you too Boyd.