A chance to reclaim a dream seemingly lost in the Great Recession. 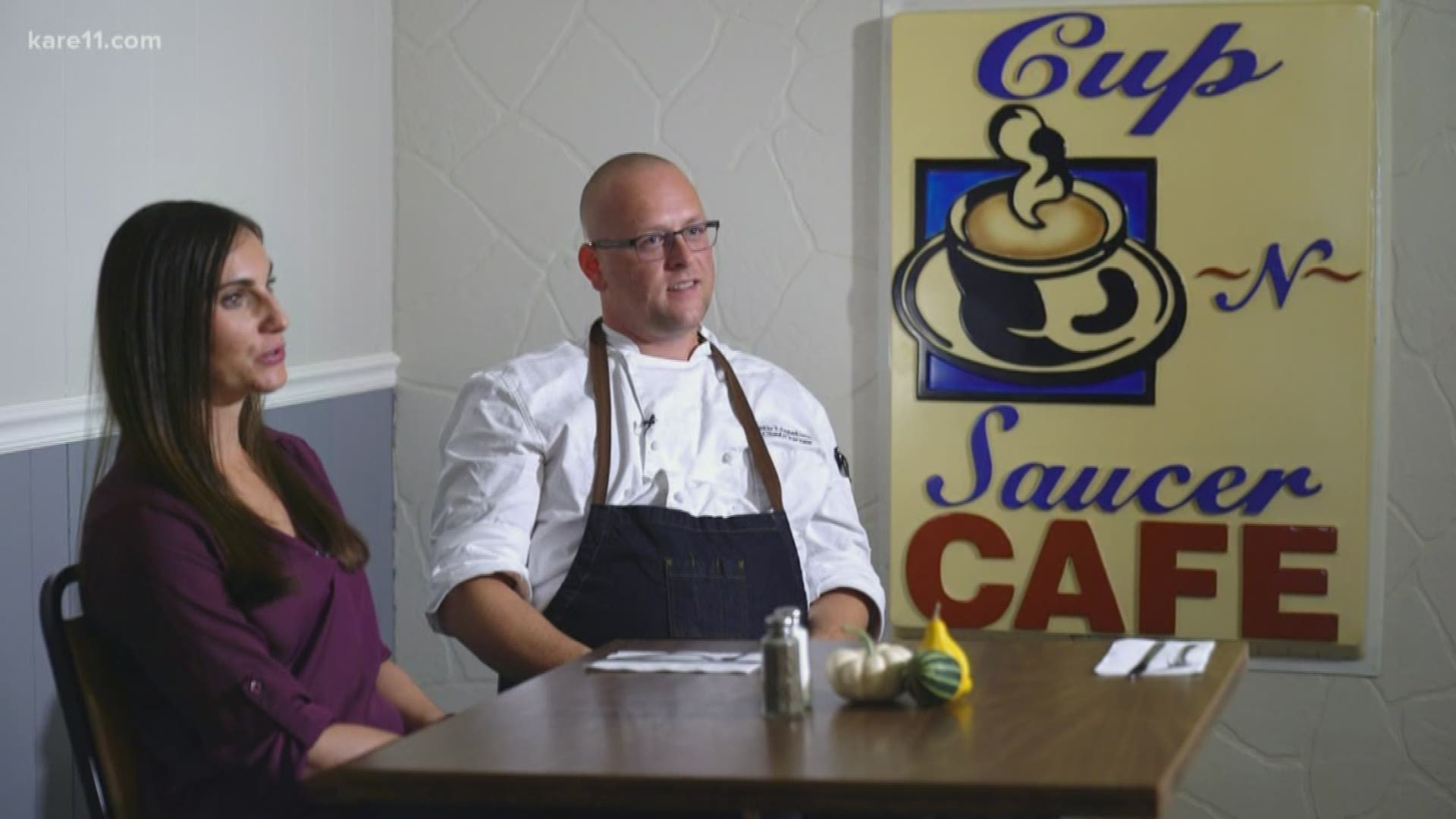 Steen sits among the other farmers and retirees at a corner table by the café’s front window.

As coffee is poured, the conversation shifts easily from sports, to the state of the fall harvest, to the day’s news – within the same walls the café’s owners, Seth and Elizabeth Lintelman, have spent the past few years making news of their own.

The story is, by now, the stuff of local legend, documented in newspaper clippings neatly arranged on the café’s walls.

“When we first won, I told people, ‘I won a restaurant in an essay contest,’” Elizabeth says, smiling.

“And they said, ‘You want a restaurant?’”

“’No, I won a restaurant,’” Elizabeth continues with emphasis.

The backstory is almost as sweet as the story that’s followed.

Credit: Elizabeth Lintelman
Workers and customers at the Cup N' Saucer in its early days

When it closed nine years ago, “The Cup” was the last to go.

“They all disappeared, people retired, nobody else went in,” Cup regular, Dennis Scheff says.

Population migration from farm to big city has not been kind to downtown Sherburn.

Yet, 150 miles away - on a similar timeline - in the Twin Cities, the fortunes of newlyweds Elizabeth and Seth were also crumbling.

“We bought our home in Crystal when we were very young and probably the worst time you could buy a house,” Elizabeth says. “I lost my job in 2009 and that was right about the time we were close to $100,000 upside down on our mortgage.”

In one swoop Elizabeth and Seth lost their home and their dream.

“There was no way we could start a restaurant, no one would give us a loan to buy a house, nevertheless start a business,” Elizabeth says.

Which brings us 150 miles back to the restaurant-desert Sherburn had become.

Then, civic-minded local philanthropists Gene and Carmen Scheppman reopened The Cup with a crazy plan. They would bring the café back to life, then give it away.

It didn’t take long for the news to reach Elizabeth in the Twin Cities. “I got a text from my mother-in-law saying there's an essay contest to win a restaurant in Sherburn,” she says.

This could be it, Elizabeth thought. Their chance to reclaim a dream seemingly lost in the Great Recession.

In her essay, Elizabeth wrote of family, community and the importance of protecting beloved institutions like a certain main street cafe.

The Cup N' Saucer was theirs - though Sherburn had yet to learn the change that was about to greet their palates.

Seth, the son of a Martin County hog farmer, had graduated culinary school and already had more than a decade under his chef's cap at Lake Minnetonka's elegant Lafayette Club.

Canned corn and iceberg lettuce would no longer cut it at the Cup.

Look as hard as you want, there’s not a french fry to be found. The Cup N’ Saucer doesn’t even own a deep fryer.

What could be found, in the early days, was skeptics.

The Lintelmans can’t forget the anonymous, handwritten letter they received shortly after taking ownership of the café.

“The style of food you want to do that’s from The Cities does not work down here,” they were informed.

The writer claimed to have recently visited, “You’re charging too much money,” Seth recalls the critical customer writing. “We couldn’t find anything that we could eat or wanted to eat or even knew what it was.”

“Basically, saying we were crazy for doing what we were doing,” Seth says. “We might as well just pack up and go now because no one’s going to support us.”

One-time skeptics are now lucky to find a seat.

On a recent Wednesday, the café was bustling for breakfast and lunch.

“You should see it on a Saturday,” Elizabeth says. “We have people standing outside waiting for tables.”

Even Seth was skeptical when his old boss at Lafayette Club suggested he try a Saturday evening tasting menu at the Cup N’ Saucer.

“I was pretty sure we were going to have a hard time filling it,” Seth says.

At $80 per person, the monthly five-course tasting menu currently has a waiting list of two-and-a-half years.

“It's just unreal,” Steen says. “Around here I didn't think there was a market for it.”

Elizabeth and Seth, meantime, have the privilege of raising daughters 2-year-old Parker and 7-year-old Addison in the family’s new home across a gravel driveway from Seth’s parents.

Credit: Devin Krinke, KARE
Addison Lintelman, 7, having breakfast at the Cup N' Saucer with her mom and grandparents.

Addison helps her grandpa pick from his garden the vegetables her parents serve at the café.

Other area farmers also contribute to The Cup's symphony of locally-sourced flavors.

“I know that I can cook, and I know I can bring out enough flavor and things to get people’s mindsets to change,” Seth says.

By lunch time, Lonna Larson and her friends occupy the round table surrendered by early-risers and mid-morning dice players.

“I can’t even pronounce half the stuff,” Lonna says of The Cup’s menu, “but they’ll explain it to me if I ask.”

The women at the table gives thumbs up to the parsnip bisque and other soups-of-the day not normally found in small town cafés.

“I don’t think they’ve ever had chicken noodle or chili,” Lonna laughs.

Lonna, who says she stops by the Cup N’ Saucer two or three times a week, says she doesn’t miss the french fries. “You don’t even want to think of anything greasy in here, everything is always fresh and healthy,” she says.

Six years ago, the Seth and Elizabeth wrote an essay and rolled the dice.

Now, the proof is in the bread pudding. The Lintelmans and Sherburn both came up winners.

Check out more Land of 10,000 Stories below on our YouTube channel.