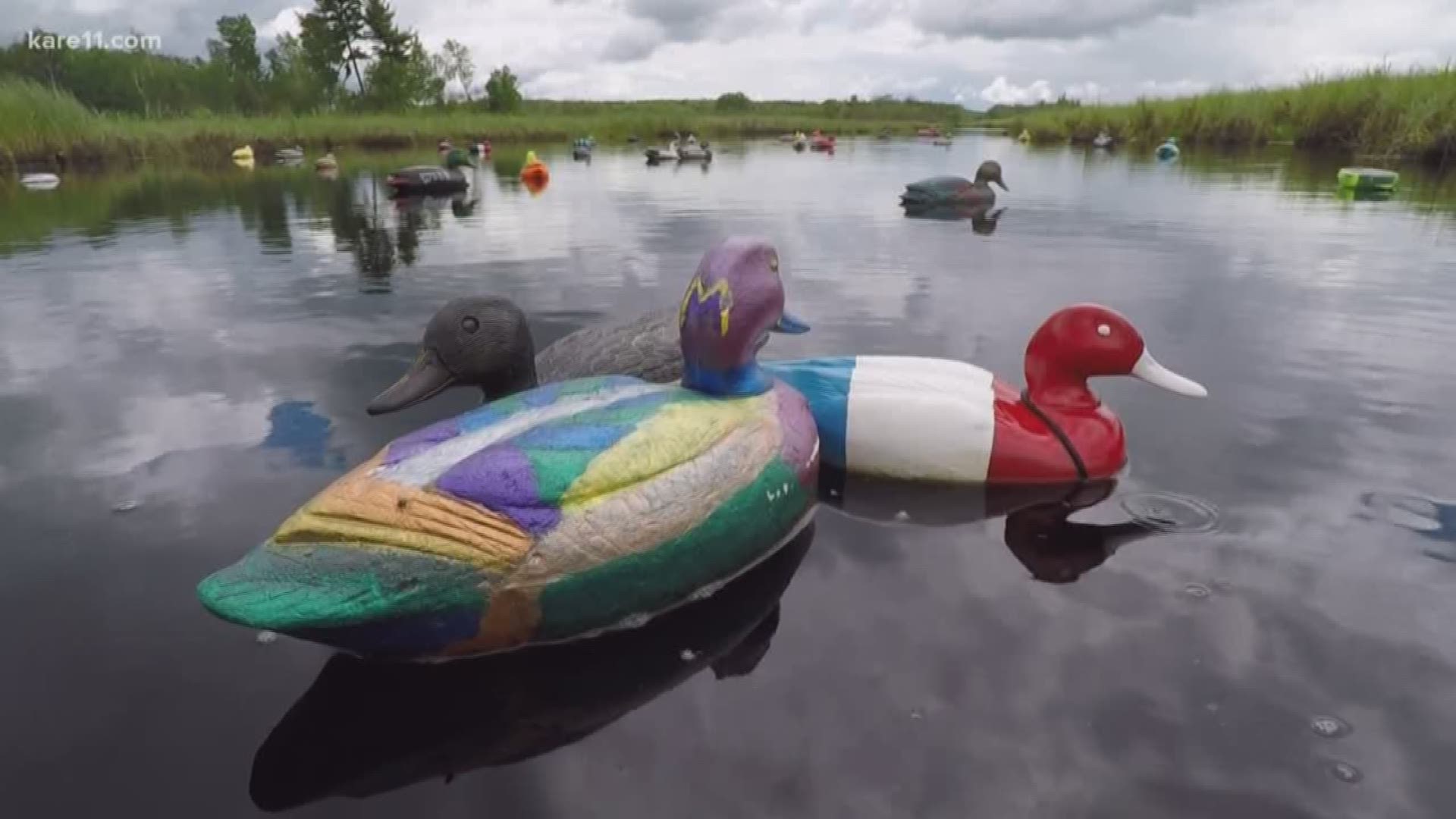 MCGRATH, Minn. — With 10,000 lakes, Minnesotans need not go far to be awestruck by ducks.

But apparently, that hasn't stopped them from wanting more.

“I think they're just cool,” Shawn Adams says from the passenger seat of a red pickup pulled to the side of the road.

“I mean, how often to do you see a pond full of painted ducks,” he says.

Credit: Boyd Huppert, KARE
Shawn Adams stops to get a closer look at the Ditch Ducks

The ducks started appearing along Highway 65 in Aitkin County two summers ago.

Ever since, Carol Davidson, who also travels the route on her way to the cabin, has been trying to figure this out where they’re coming from.

“There's nothing,” she says, having pulled to the side of the road. “No farmhouse, I mean we're out in the middle of nowhere. I wish I could find out who did it and why he does it.”

Turns out it’s not a “he” who’s responsible for filling the ditch with duck, but a them.

Joanne Ledin and her boyfriend Jeff Sutton pass the ditch on their way to the cabin too.

During the trip, Joanne would always spot an old log sticking out of the water and mistake it for a turtle.

“I would get me every time,” she laughs.

“So, I said, ‘I'm going to paint a yellow duck, throw it next to the log, and you get quit calling it a turtle,’” Jeff explained.

Which is what Jeff did.

One duck. All alone.

“About a-month-and-a-half later a pink duck showed up, Jeff says, “and it hasn't quit yet.”

Two summers later, dozens of ducks have landed in the ditch, yet only the first one placed there by Jeff and Joanne.

Credit: Boyd Huppert, KARE
All is calm in the ditch

Some honor sports teams, family pets or lost loved ones. Many are painted in bright colors not often seen in nature.

“We created an animal,” Joanne laughs.  “A flock!”

Their flock now has both a Facebook page and a name: Ditch Ducks.

And the Ditch Ducks are about to get a new member.

“This is just kind our way to honor our little buddy and get a duck in the flock,” Brock Hamre says.

Brock’s son Jake has mitochondrial disease, a condition that’s left him on a ventilator and in a wheelchair.

The Hamre family drives past the Ditch Ducks on the way to their cabin too.  Inspired, Becky Hamre, Brock’s wife, painted a duck for her son.

Becky painted Jake’s name in white on a background of green, the color of mitochondrial disease.

The duck is also a red head, just like Jake.

“We're doing this for him, so people can know him more,” Max says of his brother’s duck.

Jake's duck, like all the others, will fall under the watchful eyes of Jeff and Joanne, who gather the ducks in the fall, mending and stowing them until they return them to the ditch in the spring.

“We started it - we figured we should maintain them, any sick ones we take out, nurse back to health,” Joanne says.

The couple also keeps the ditch free of trash and the occasional beach ball tossed in with the ducks by a passing motorist.

Why do they do it?  For the smiles.

“We've had people say this is the funnest part of our trip because all of our kids are staring out the window of our van looking for these ducks,” Jeff says.

Jeff and Joanne love thinking about those kids, glued to the windows on that boring stretch of Highway 65, waiting for the spectacle ahead.

The keepers of the Ditch Ducks have their priorities in a row.

1 / 11
Boyd Huppert, KARE
A Ditch Duck floats in his habitat