Joe Klick recently stepped from a Minneapolis-bound plane, into the arms of four aunts he didn't know, until recently, he had. 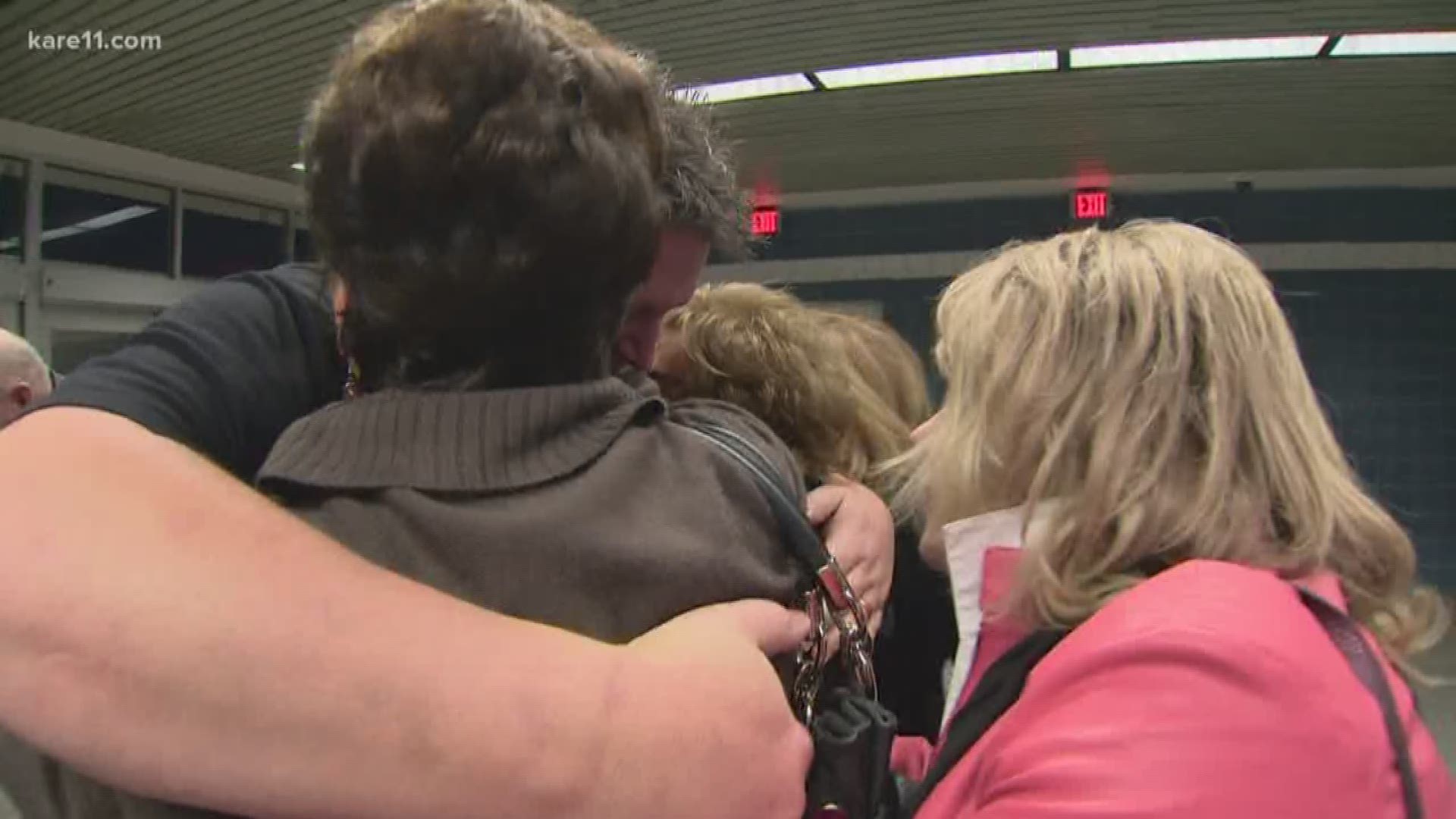 Joe Klick recently stepped from a Minneapolis-bound plane, into the arms of four aunts he didn’t know, until recently, he had.

Joe grew up unaware the man he thought was his father, was not his real dad.

Joe’s real father - Wallace “Skip” Schmidt - left for Vietnam in 1968, having not been told his 16-year-old girlfriend was pregnant with Joe.

“Back in the late '60s things were different than they are now,” Joe said of his mom’s pregnancy. “My grandparents and stuff they basically put her in a relationship with someone else.”

Diane Finnemann says her brother Skip was patriotic and proud when he left Minnesota with the famed Twins Platoon, sworn into the Marines in front a baseball crowd at Metropolitan Stadium.

“It was during the Tet Offensive and they came to the realization it was all politics that was playing the game,” said Diane Finnemann.

“He said, 'Everybody I know is dead,'” Diane recounted. “And several of them died in his arms.”

Skip came home with part of his right hand shot off – and worse.

Another sister, Jacquie Krismer, said bad only got worse. “He just wanted out, out of his pain. Every direction he went, it just wasn't working.”

Skip took his own life in 1972, still unaware he had a son. He was laid to rest at Fort Snelling National Cemetery, a war hero whose bravery earned a Silver Star.

Skip’s family was devastated. But over the years, his sister Diane poured her grief into action. She lobbied for passage of a bill creating Minnesota’s Vietnam Veteran’s Day. Diane stood over the shoulder of Governor Tim Pawlenty when the bill was signed into law.

Then, last year, Diane and several other family members discovered the DNA-testing website ancestry.com. Upon receiving their DNA reporters, each of them found listed as a close relative on their reports, the same name: Joe Klick.

“Who are you?” the sisters asked themselves.

By then Joe had learned the truth about his birth, but was still unsure of the whereabouts of his real dad. He only knew his name was Skip.

Joe’s wife encouraged him to register with ancestry.com. His DNA report came back peppered with members of the Schmidt family from Minnesota.

In January, Joe and Diane messaged each other.

Diane told Joe she did indeed have a brother, Skip, who died after the war.

Diane soon got a message back from Joe. “He said, ‘I’m really having a hard time holding it together right now.’”

Diane called all three of her sisters, Colleen, Jacquie and Shannon Monahan. One by one she broke the news that Skip had a son - which meant the sisters had a nephew - living in Georgia and wanting to meet them.

“I get to touch him, I get a piece of my brother,” Diane said before Joe’s flight arrived. “We actually get to physically have something to hold onto.”

The excited sisters swarmed Joe once he cleared security, hugging their nephew tightly and wiping away tears.

“You can just see features of Skip,” Sharon said.

“I feel his heart, I feel his soul,” Diane added.

The next few days were spent introducing Joe to his father through photo albums, letters and get-togethers with relatives.

The trip was timed so Joe could attend Forest Lake’s Vietnam veteran’s program – an annual event organized by Diane in Skip’s memory and attended by hundreds of veterans and their family members.

“This is why we wanted Joe to come now,” Diane says, “so he could witness and see what his father started.”

Diane pinned on Joe a yellow ribbon, a symbol of the Gold Star Family to which he now belongs, having lost his father due to war.

Sharon shared the story of her family’s discovery with the crowd. Joe sat nearby, wiping away tears. He was toasted with a standing ovation.

For Joe, the trip was bittersweet. While he treasured his new family connections, Joe was also forced to face a difficult reality. “The one person I was trying to find the whole time, I will never meet,” Joe said.