Fans of ice cream inspired during stay-at-home, drive up demand – line up by the hundreds

Zach Vraa experimented with flavors during stay-at-home, then launched A to Z Creamery 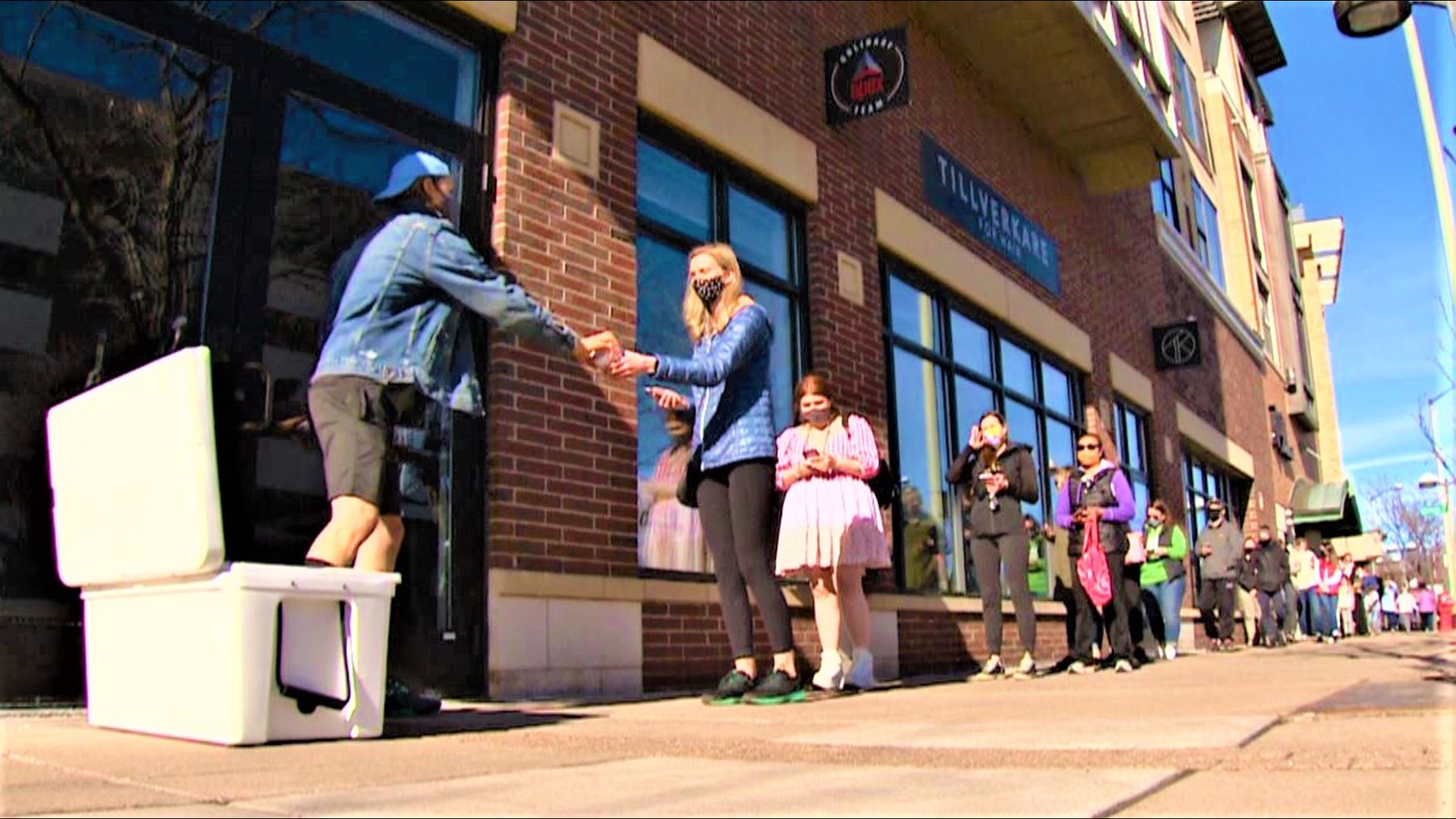 She won’t be by herself for long.

Heather Hancock walks up with her son Oliver. “I'm like ‘We won, Oliver!’ We got it!” Heather laughs, happily standing, like Katy, on the concrete.

Within minutes, the line extends up Excelsior Boulevard and around the corner.

One woman says she’d “stand in line for an hour” if she had to.

What enticement could possibly be prompting this expanding queue at 4:15 p.m. on a Thursday?

“My mom getting me an ice cream machine for my birthday, honestly,” Zach Vraa laughs.

Credit: Devin Krinke, KARE
Katy Dow (far left) was first in line for the latest A to Z Creamery flavor

Zach was like a lot of other folks at the start of the pandemic, working his sales job from home.

But the 29-year-old was also experimenting with his birthday gift.

On a whim, Zach posted on Instagram a photo of one of his first creations – ice cream made with Lucky Charms breakfast cereal, complete with colored marshmallows and black cherry frosting swirl.

And when Zach’s followers started asking if they could buy creations like Funfetti with blondies and sprinkles, the ice cream hobbyist brushed off the inquires.

“I would post it on my page, say, 'I have 10 pints available,’" Zach recalls. “I would have 100 people messaging me. That's when I kind of figured out, ‘Wow, I need to start doing this full scale in a full commercial kitchen.’”

Now, Zach is doing exactly that – under the brand A to Z Creamery – making ice cream in rented commercial kitchen space, while still experimenting with frozen concoctions like Everything Bagel with garlic cream cheese swirl.

Zach makes his ice cream base from scratch. Same for his toppings. For a recent variety called “7 Minutes in Heaven,” Zach baked 13 pans of seven-layer bars he cut up and generously mixed into a salted caramel ice cream.

“I did a flavor over the state fair that was pronto pup,” Zach says. “It was pancake batter ice cream with candied hotdogs and a mustard and ketchup swirl.”

Those 10 pints Zach first offered for sale, have blossomed to 300 a week, with demand for Zach’s $12 pints often ten times his supply.

He offers one flavor a week – no repeats – teased in a video posted on the A to Z Creamery Instagram page. The flavor is formally announced with an artful photo the day it goes on sale.

Credit: Adam Klosterman
A to Z Creamery's "7 Minutes in Heaven" made with seven-layer bars

Zach’s customers don’t stray far from their phones and laptops when a flavor is about to drop.

Some 300 pints of “7 Minutes in Heaven” sold out on his website in one minute – the norm these days when Zach posts a new flavor.

“Isn’t that insane?” Zach asks, as he watches the barrage of orders suddenly filling his laptop screen. “I still get butterflies in my stomach.”

Gastric butterflies are nothing new to Zach.

Before he made ice cream, Zack was setting football receiving records for North Dakota State University.

The former Rosemount High School standout and Minnesota’s 2009 “Mr. Football” possesses something few can claim: five NCAA national championship rings earned from 2011 through 2015 while playing with the NDSU Bison.

As in football, Zach runs his business with precision.

All successful buyers have a 15-minute window to pick up their ice cream, the reason for the block-long line up Excelsior Boulevard.

At 4:30, the door to the commercial kitchen swings open and Zach emerges with a large chest cooler packed with ice cream pints.

It’s doubtful anyone in line knows of his gridiron dominance. He’s just the guy that makes the ice cream they pursue.

“Stoked, ready to try it,” she says. “He makes literally the best ice cream I've ever had.”

Zach keeps small talk to a minimum. The line is long, and people have been waiting.

“Every time I open the door and see the line wrapping around the corner, it's a feeling that never gets old,” he says.

The former college football star is lining up a cool second half.

Fans of ice cream inspired during stay-at-home, drive up demand – line up by the hundreds