Instead of grain, Tom has repurposed his 1967 John Deere combine to dispense candy. 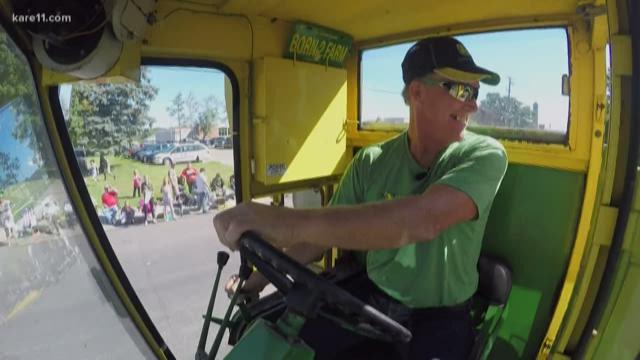 *This story originally aired Oct. 19, 2016. The video has since been updated.

Tom Konz’s rig does exactly that.

Instead of grain, Tom has repurposed his 1967 John Deere combine to dispense candy.

“They don't know what to expect,” laughs Tom, “and all of a sudden candy comes out. They just go nuts.”

The grain farmer isn’t exaggerating. An excited buzz from the curious crowd can be heard as Tom’s candy combine comes into view. Children leap to their feet, arms upward, as candy rains down upon them from the combine’s grain auger extended over the sidewalk.

The corn and soybean farmer purchased the old combine four years ago specifically for parades. The notion to dispense candy from it didn’t come until later.

Tom can’t remember when or why inspiration struck, but he knew he was onto something the first time he pulled the lever on his grain auger and Tootsie Rolls and lollipops streamed up and out.

“I think I’m smiling more than the kids,” Tom laughs, as he lumbers through the St. Boniface Church parade in Cold Spring, pulling the lever on his candy auger and showering kids with treats.

Some children hold up sack as the candy pours in. Nearby a woman chases the combine with an open picnic basket.

Children in Cold Spring, Minnesota raise their sacks for the candy combine

“Awesome,” seems to be the word of the day.

Every summer Tom takes his candy combine to a handful of parades. He’d go to more, he jokes, but he might go broke. “It’s usually between a $100 and a $130 dollars’ worth of candy,” Tom says.

Tom still enjoys bringing in the crop back home on his farm, but what’s not to like about harvesting smiles with candy corn.