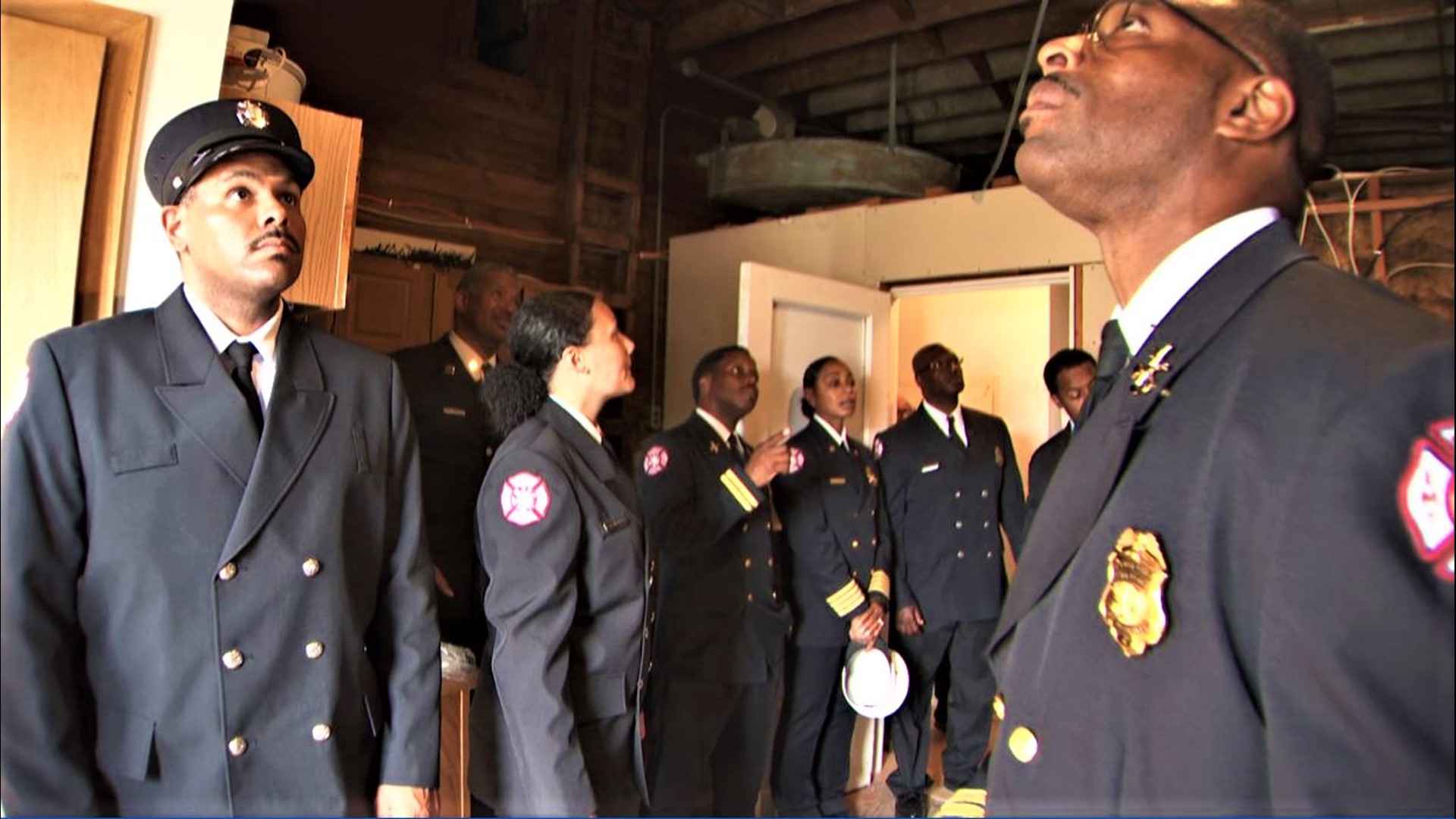 In one of those buildings we pass by, but don't necessarily see, history is quietly simmering.

Rucker joins a dozen other Black firefighters who will walk the halls and climb the old staircases of the building at 45th Street and Hiawatha Avenue.

“That’s all original,” the building’s owner, John Bean, repeatedly says during the tour.

More than a century has passed since the building the firefighters are seeing for the first time, opened as Minneapolis' first, and ultimately only, all-Black fire station.

“It was opened in 1907,” Joseph Waters, a firefighting historian, explains.

Waters has spent the past few months filling a paper folder with his research on both the building and the men who served in it.

“Oscar Clark, Archie Spence, and James Cannon,” Waters says, listing the names of long-deceased Black firefighters who spent all, or significant portions of their careers, at Station 24.

Many more names have been lost to time. Waters estimates dozens of Black firefighters served at the station, covering three shifts, 24 hours a day, for the 34 years the fire station was open.

“They broke the ground for us,” Rucker says.

Credit: Chad Nelson, KARE
John Beam (center of photo) gives a tour of his building, once home to the Minneapolis’ only all-Black fire station.

Rucker joined the fire department 21 years ago, where he’s risen to the rank of Fire Motor Operator.

“If the system was how it was back in the day,” Rucker say with a laugh, “I would have been the one in control of the horses.”

Rucker takes a handful of visitors on a tour of Station 5, where he serves with men and women of different races.

“This is where we eat our lunch and dinner,” he says.

Down the hall, he points to several neatly made beds.

“This is my room here,” Rucker says.

The beds harken back to a time when white firefighters refused to sleep in beds that had been occupied by Black firefighters during the shifts before them.

“That's why there was a segregated Black fire station,” Rucker says.

As a young volunteer paralegal in the early '70s, she worked on the federal lawsuit that forced the Minneapolis Fire Department to open its hiring process to minorities.

Today, 62 Black men and women are among 403 Minneapolis fighters, including the city's fire chief, Bryan Tyner.

Lange organized the tour that brought the Black firefighters together to see the building that once housed Station 24.

After being sold by the city, the station served a variety of private uses, but has remained largely intact.

Lange points to the tin ceiling on the main floor. “That hole up there represents where the first fire poll was,” she tells the firefighters gathered around her.

The retired judge has also taken the lead on gaining a historical designation from the City of Minneapolis to protect the fire station from demolition, even as a large apartment complex rises next door.

Bean, who leases the building to others, is supportive of the efforts to preserve the structure and respectful of the history contained inside.

“These are the original boot lockers that the firemen would have used,” he tells the firefighters who’ve gathered in his building.

Rucker is the organization’s president.

The tour was his first time inside the building that once housed the all-Black fire station.

“It's just very emotional,” he says, “because they paved the way for us to be on the job and have these nice careers we’re having, so we can raise our families and serve the community.”

Backers envision a museum where children can visit.

As if on cue, kids from a neighborhood summer program happened by as the Black firefighters were assembling outside the old station.

Soon, those same firefighters began sharing information about careers within the department with the largely African American class.

It’s progress, still being built - brick by brick - on a strong foundation.