Grandpa spends a decade making 10 violins for his grandkids 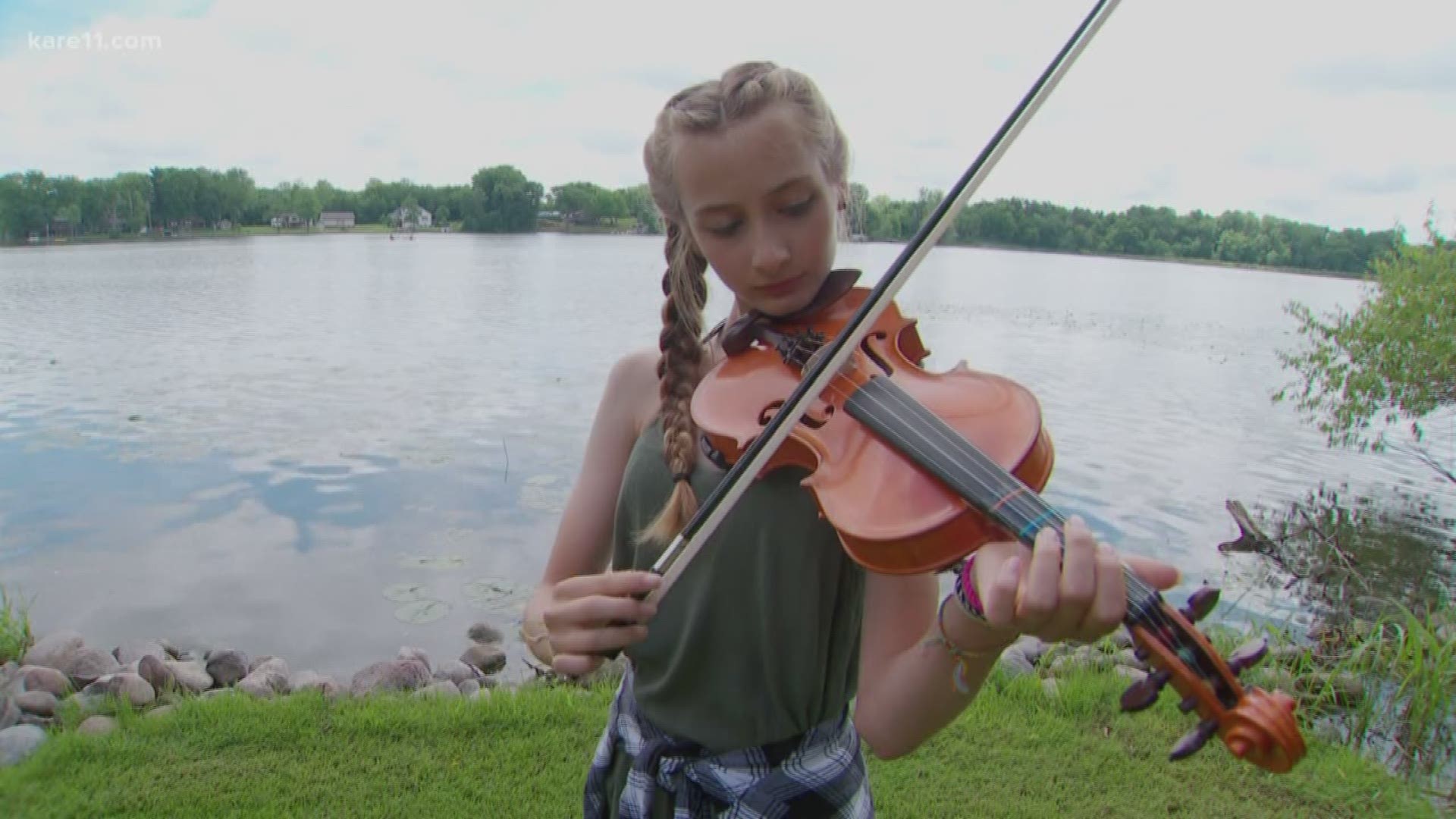 Credit: Lori Zabel, Isanti-Chisago County Star
The grandchildren of Gene Van Alstine hold the 10 violins he made for them.

CAMBRIDGE, Minnesota — The strings on his fiddle dance with the bow while Gene Van Alstine waltzes with his past.

On a summer afternoon, Gene plays fiddle solo in his workshop a few steps from a framed black and white photo of an older gent wearing a moustache.

“All evening he'd play fiddle and let me sit on his lap,” Gene says of the man in the picture.

“My grandpa was a really cool guy,” Gene says.

Charlie Johnson – Norwegian, immigrant, farmer – is stern-faced in the photo, but is smiling on the inside.  His grandson, at least, is certain of it. Charlie is, after all, clutching his fiddle and bow.

“I’m not sure the cows got milked every night, but I’ll guarantee those fiddles got played,” Gene says of his fiddle-playing grandpa and uncles.

Years later, the same violin Gene’s grandpa holds in the photo would be given to Gene. It is the instrument on which Gene would learn to play too.

“I’ve got a lot of stuff in this world,” Gene says, “but nothing that means more to me than that fiddle. Every time I pick it up, I think of my grandpa and how much he meant to me.”

Someday, Gene imagined, his grandpa’s fiddle would be passed on to a grandchild of his own.

Yet, the more he thought, the more Gene’s desire to pass on his grandpa’s fiddle presented him with a problem.

How do you bequeath one fiddle to ten grandchildren?

“You can't cut it in half,” Gene says, “And I wanted each one of them to have the same feelings that I had.”

Then, Gene had his brainstorm.

He would make a fiddle for each of his ten grandchildren.

But that presented Gene with another problem.  He didn’t know the first thing about making a violin.

No matter. He’d have to learn.

For three years Gene read everything he could about violin-making. Gene read, until he was ready.

But even then, he hedged his bets.

“This is the Menards' fiddle,” Gene says, picking up a violin from its stand in the shop. Gene has named it such, because the home improvement store is where Gene paid $8.50 for the wood for his prototype.

That Gene traveled from zero to a completed violin comes as no surprise to Shari Van Alstine, Gene’s wife.

“He just has this ability to see what he wants done and do it,” Shari says.

For the better part of the next decade, Shari has never needed to concern herself with the whereabouts of her husband.

“I think over seven years, I probably spent 1000 hours each year to build those fiddles,” Gene says.

“You've got it,” Shari says. “He is obsessive and driven both.”

“I had bladder cancer,” Gene says. The first time was three years ago.

No one would have blamed Gene, during a cancer fight, if he had given up on his project. Instead, Gene picked up his pace.

“To make sure these fiddles go to these kids before I passed away,” Gene says.

Then, this past Easter Sunday, Gene delivered all ten completed fiddles to his grandkids.

“People really got a little choked up with all he'd put into it,” Shari says.

Credit: Boyd Huppert, KARE
The violins made by Gene Van Alstine for his 10 grandchildren

“You know you can go and buy a fiddle that's probably as good or better than I've made, but all that was, was money - and this was made with love,” Gene says. “I want to leave them something that's special, just like my grandpa did me.

Gene’s 19-year-old granddaughter Kendrah Schmidt expresses a sentiment shared by the other grandchildren.

“I think we’re so lucky to have somebody that loves us so much that they gave us that special of a gift,” she says. “He doesn’t even necessarily need us to play them, he just wanted us to have this special thing from him.”

Earlier this summer, Gene had another small tumor removed.

He hopes for more time.  Some of his grandchildren have started taking violin lessons.

Gene is already imagining the possibilities.

“I think we'll a have jam session that will go for two days here,” he laughs.