Man with autism stunned when community buys him a new bike

Ty Burch can't drive because of his autism. When his bike broke down, River Falls rallied in a familiar way. 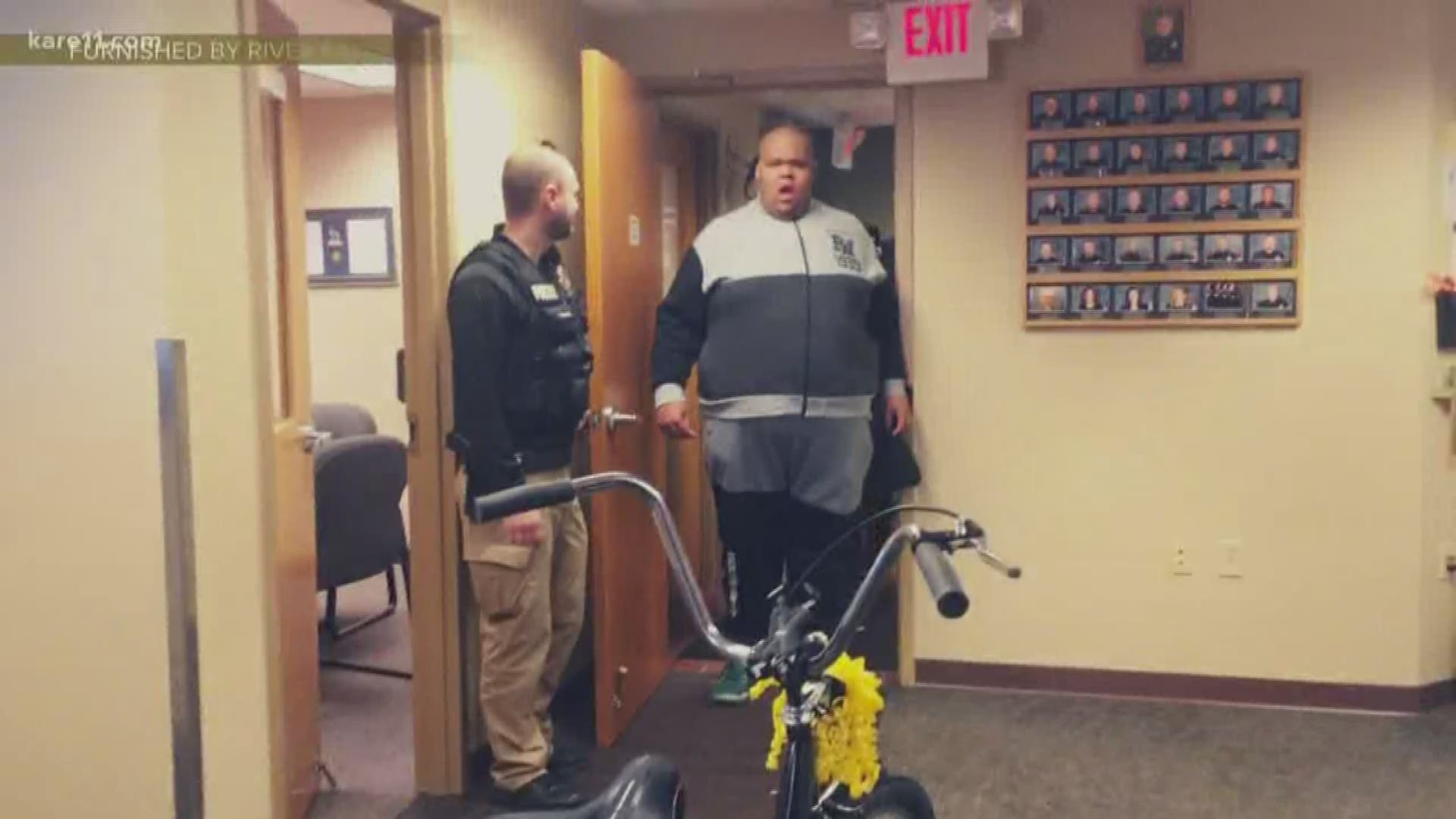 Credit: River Falls Police Department
A stunned Ty Burch walks into the River Falls, Wisconsin police station where he is surprised to find a new bike.

RIVER FALLS, Wis. — When he's gripping the handle bars of his three-wheeled bike, one of the best parts of Ty Burch is occupied.

It’s best to wait for him to stop. That’s when Ty can free up his waving hand.

Waving and biking, Ty does both passionately.

“It's what I'm mostly good at,” Ty says of his daily rides around town.

It’s why Jenny’s heart is so full. Her 20-year-old son is back on his bike for the first time in months, thanks to the community through which Ty rides and a fund named for Francis Johnson, another avid River Falls biker.

“Just sitting in my office and the phone rings,” Chief Young says.

The caller, a retired police chief from another town, had seen a young man struggling, while trying to ride a broken bike.

Ty remembers that day too. “I felt I was about to tip over and fall,” he says.

Ty's mom also felt her heart breaking. “Just to see him so upset,” said Jenny, knowing what the bike had meant to Ty.

After Ty was diagnosed with autism, biking became the one thing he could make his own.

“I think it's just kind of his escape from everything,” Jenny says. “I felt like I was failing as a parent because, I'm like, I need to buy a new bike, but that's a big purchase.”

Fortunately, River Falls had been down this road before.

Francis Johnson, a food service worker at UW-River Falls, had worn out his bike too.

Credit: Mary Boston
Francis Johnson died of a heart aneurysm while riding to work on the bike he was given

Elise Koop, one of Francis’ co-workers, organized the effort to buy Francis a new bike.

The video shows Elise surprising Francis at work, then driving him to a local bike shop to pick out his new ride.

It was the bike on which Francis was riding ten months later, when he suffered a heart aneurysm and died.

“He actually was coming to work when he passed away,” Elise says.

The loss of her friend inspired Elise.  She decided the gift the community had given to Francis would be given to others.

It’s the fund that paid for the bike that now sits in the rack at Dick's Fresh Market – the bike Ken Phillips rode to work at the grocery store.

“My doctor won't let me drive until she says it's okay because I've already had two strokes,” Ken says.

He didn’t grow up in River Falls, but Ken can’t imagine a more supportive community than the one he now calls home.

“The one thing that makes River Falls is the people,” Ken says.

They’re some of the same people who heard about Ty's broken bike and summoned him to the police station.

When Ty entered, they the assembled crowd yelled “surprise!”

There, before Ty, was a brand new three-wheeled bicycle purchased with funds from the Francis Johnson Memorial Fund.

Mouth open and eyes wide, wondered aloud if he was “being punked.”

Jenny Edward couldn’t help but smile. “He rode it home and he hasn't stopped since.

When asked about the gift, Chief Young said simply, “It's what we do here."

His community is taking them off.

Credit: KARE
Ty Burch on one of his daily rides through River Falls, Wisconsin

“I like to ride because it makes me feel like I'm free and I can do whatever I want,” Ty says as he pedals slowly down a main street sidewalk.

If the mood hits him, he'll stop and wave.  But only a minute.

Ty’s road ahead is wide open.

Man with autism stunned when community buys him a new bike

1 / 8
River Falls Police Department
A stunned Ty Burch walks into the River Falls police station where he is surprised to find a new bike.