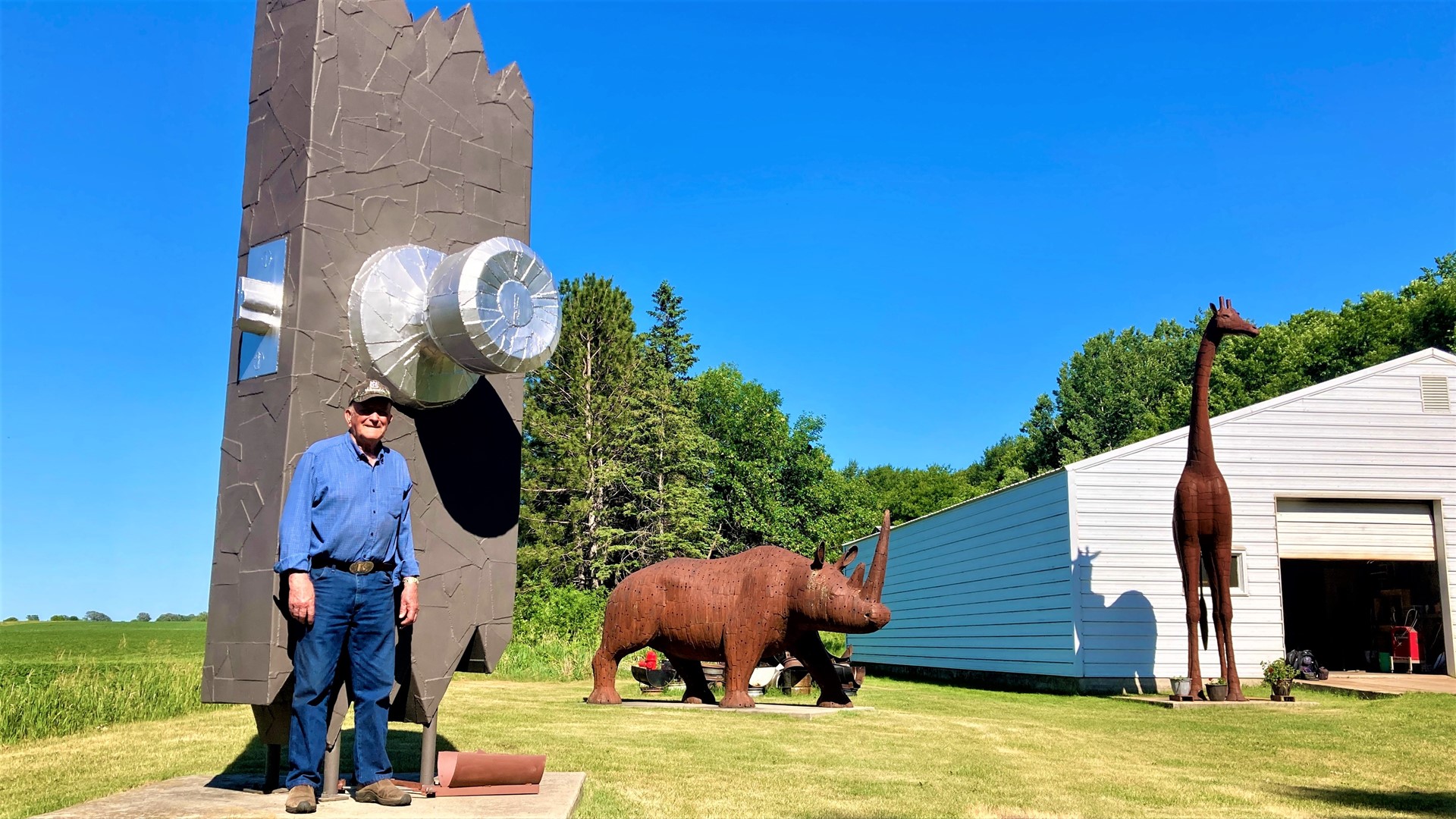 VINING, Minn. — When you live in a town of 78 people, sometimes you have to think bigger.

For Ken Nyberg, bigger means a 20-foot-tall clothes pin next to the Vining, Minnesota post office and a metal giraffe taller than Ken’s workshop.

During the past four decades, Ken has welded lawnmower blades and other metal scrap into more than 100 sculptures that dot the landscape in and around Vining.

Want to see a 14-foot-tall pliers squishing a cockroach?

You’ll find it in Vining.

Is a green space alien or a 2,500-pound metal elephant more to your liking?

You’ll find those in Vining too – along with a 14-foot-tall butter knife dancing with a spoon.

“Just taking a nap all day, that doesn’t cut it,” the prolific 83-year-old artist says.

Ken is currently making some of the final welds on a massive eagle that towers above him in the workshop located a few miles outside Vining.

“There’s 582 lawnmower blades in here,” he says of the eagle. “It represents a lot of lawn cutting.”

The self-taught artist and welder created his first sculpture – a metal tree – as a joke gift for a newly married couple.

Then, Ken got more serious about his newly discovered talent.

His only rule: no two alike, though there have been similar themes as Ken’s sculptures have gained fans beyond Vining.

“Down at Byron, I made bears for all three of their schools,” Ken says. “Great big grizzly for their high school – they're the Byron bears – I believe there's 1207 lawnmower blades in that.”

When Byron built a new elementary school, Ken got another call. “And I made them bear cubs and in those two bear cubs there’s 1626 lawnmower blades,” Ken continued.

A few years ago, several of Ken’s sculptures were moved to a sculpture park next to the Big Foot convenience store, which was named after one of Ken’s early Bunyanesque sculptures.

Then, the BBC showed up in Vining and produced a music video about Ken.

Now, the guestbook kept at the convenience store shows visitors from around the world.

Yet despite the attention, Ken is still not the most famous person from Vining.

Heck, he’s not even the most famous Nyberg in Vining.

Credit: Boyd Huppert, KARE
Ken Nyberg poses with some of his metal sculptures in front of his shop near Vining, Minnesota

Karen’s proud hometown hung signs in her honor just below the green Vining city limits markers at the edges of town.

Karen’s dad paid a tribute his own way, by creating a metal astronaut statue that stands in the Nyberg Sculpture Park.

The ever-modest Ken allows his pride to swell just a bit when the topic turns to Karen. “She's accomplished quite a lot,” he says.

Big accomplishments run in the family.