MN teen sleeps 18 months outside in a hammock

Any parent could understand Deb Adams’ concern. Her 17-year-old son has spent the past 18 months sleeping outdoors in a hammock. 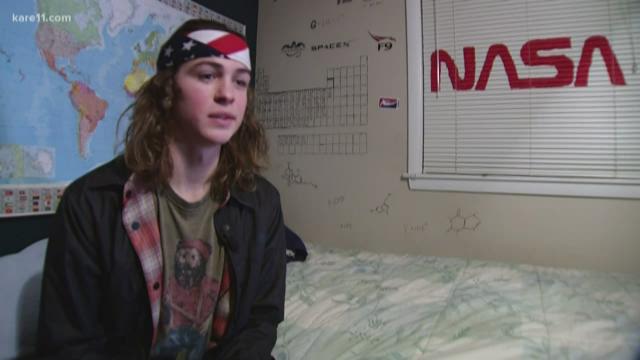 The outside temperature had dipped to 22 below zero, when Henry Adams was shaken from his sleep.

“’Henry, Henry are you awake?’” he recalls his mother urgently asking. “Like making sure I wasn't dead, like frozen.”

Any parent could understand Deb Adams’ concern. Her 17-year-old son has spent the past 18 months sleeping outdoors in a hammock.

“I still get nervous, I worry,” says Deb, who’s tried to put her fears aside. “He’s always marched to the beat of his own drum and we’ve just run with it.”

Henry Adams' hammock hangs in front of his family's home

Even Henry’s friends are skeptical when they first hear about it. “A lot of people think I'm BS-ing them,” says Henry, sitting on the edge of his normally unused bed. “I have not slept in this bed in 18 months.”

Henry, it turns out, was an early and enthusiastic adapter to the hammocking craze. Then, in the summer of 2015, he took his hobby to the next level.

“I honestly thought when it gets really cold he won't go out there, he won't want to be outside,” says Jay Adams, Henry’s dad. “But here we are, he's still out there.”

Henry tried positioning his hammock in various place in the yard, but finally settled on a perch between two posts on the front porch.

“It’s all about layers,” explains Henry as he digs into his bedding, revealing four sleeping bags and three heavy blankets.

“When I go out there and I’m only wearing pajama bottoms, I’m cold, because I don’t have a shirt on, but I know in about a minute and a half I’m going to be toasty warm inside about a foot of insulation,” Henry explains.

Anyone looking for a deeper meaning to Henry’s exploits might be disappointed.

“I mean he’s just not your standard kid,” says his dad.

Yet Henry is hardly an outsider. The Edina High School senior is popular in school, active in sports and has a mind for science.

“Being outside is just really where I like to be, and I think it’s cozier than sleeping in a bed,” says Henry.

Besides, reasons his father, “If he gets too cold, he’s just going to come in.” Which is about as likely as a beach party breaking out on the family ice rink.