Jim Fiorentino spent decades collecting Cuckoo Clocks. Now, four years after his death, the collection is about to become a public museum. 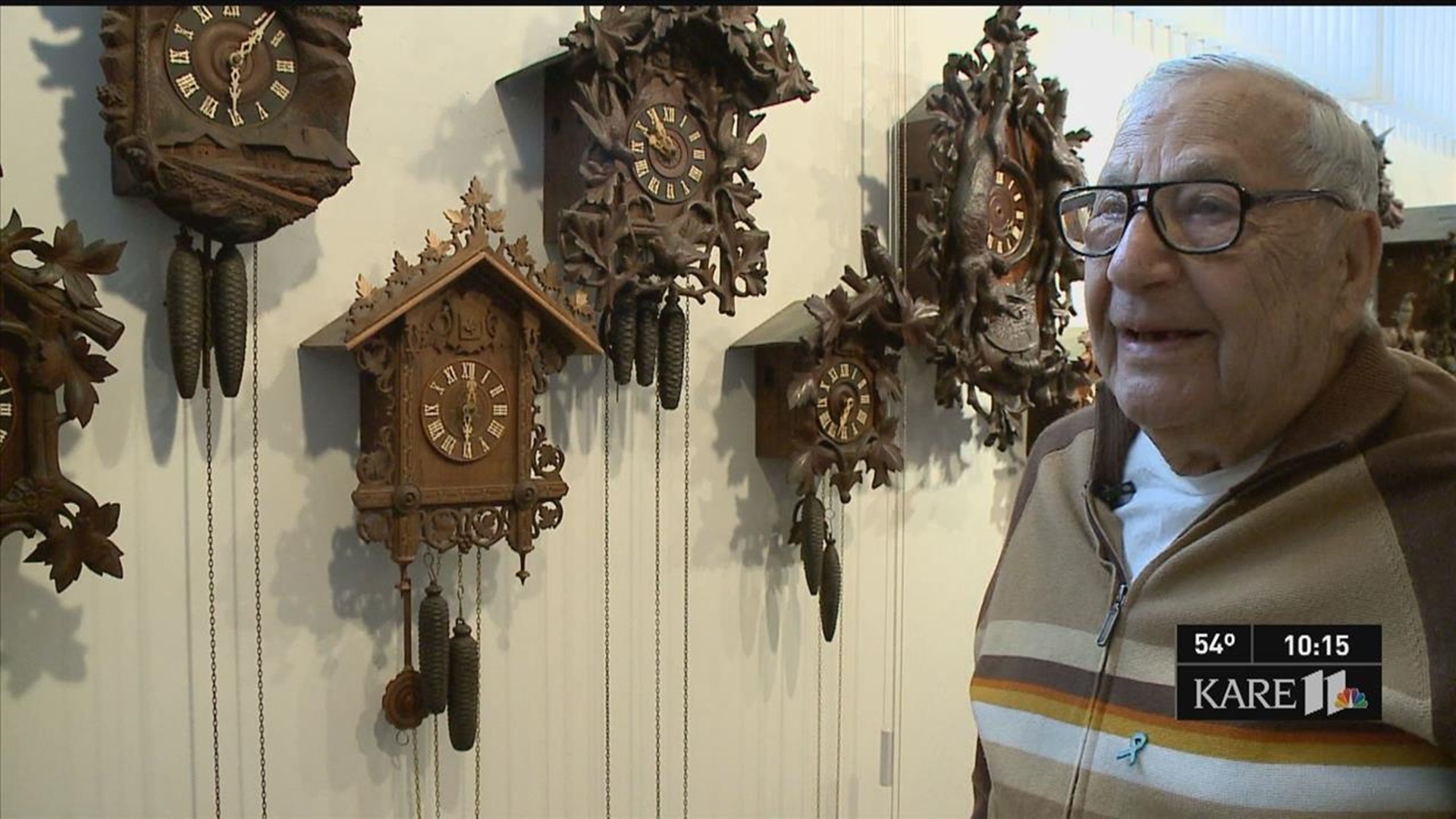 MINNEAPOLIS — Editor's note: This story originally aired in May 2014. It's being reposted as plans advance to turn Jim Fiorentino's massive collection of cuckoo clocks into a public museum.

Present plans call for the museum to open this summer. To follow the progress of the opening, click here.

Here's the article from 2014, three years before Fiorentino passed away:

If we told you that hundreds of cuckoo clocks hang on the walls of a North Loop warehouse, your ears would be poised. Just not for not for silence.

To Jim Fiorentino's way of thinking, even a clock collection like his, is best enjoyed by eyes.

"The cuckoo sound don't thrill me at all," he says. "It's the craftsmanship in them."

More specifically, it's the hand-carved leaves, woodland animals and mountain chalets that give Fiorentino a charge, the 19th century work of craftsmen from Germany's Black Forest, ornamenting the clocks that hang neatly throughout the warehouse.

"These aren't da Vinci's or anything like that," says Fiorentino emphatically. "These are just ordinary farmers that carved this stuff."

More than 800 clocks, of all shapes and sorts, cover the walls of his building, but it's the cuckoo clocks of which 91-year-old Fiorentino is proudest.

He collected his first in the 1970s, a cuckoo clock that had been in his home as boy. Fiorentino saved the clock as his brother was preparing to throw it away. Many of the rest were purchased at flea markets and estate sales. Those in disrepair, Fiorentino repaired.

"I'm a saver, I'm a keeper," says Fiorentino. No need to take his word for it. A walk through his building – purchased in 1957 to house his former garage door business – reveals antique record players, beer steins, his childhood bicycle and even a pencil he used in kindergarten.

"There's something for everyone in here," he says.

Still, Fiorentino is increasingly aware time is catching up with him. His legs no longer easily lift him to his clock repair shop on the second floor and his eyes aren't sharp enough anymore do fine carving with his woodworking tools.

Still, he's determined to see his vision through, now paying others to build displays and shelving "to get this place in shape where I want it."

Fiorentino knows his clocks, some nearly 200 years old, are coveted by collectors.

"I wouldn't even want to see the rush to get them, they'd trample you to death," he says.

But a man who never put a price his things in life, can't bear the thought of them being split up and sold after his death.

"This is my life, I want to preserve it," says Fiorentino.

Which is why he's putting the finishing touches on the museum he plans to leave behind.

Already, Fiorentino has created a foundation to run the museum, funded with his savings, investments and the proceeds of the sale of his business.

His purpose is simple. "So people, future generations, will have something to look at. They don't have to look at the walls, they can look at cuckoo clocks."

Perhaps visitors will look so intently they'll forget to listen.

Jim Fiorentino wouldn't mind at all.